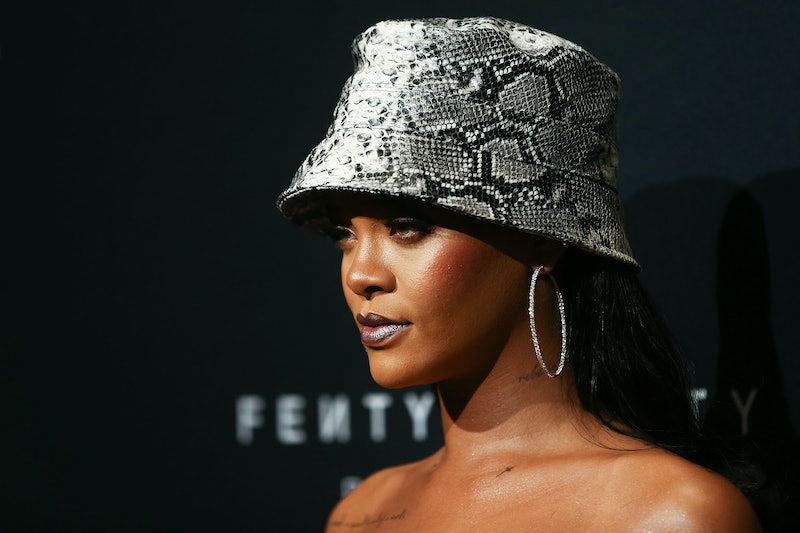 It's been nearly three years since Rihanna put out her last album, Anti. In the interim, she's been featured on a handful of other artists' tracks, and has kept plenty busy by continuing to build her fashion and beauty empires. Now, though, Rihanna confirmed her next album will be reggae, according to a recent interview with the Times' T Magazine. It doesn't yet have a name, and she doesn't know when it will be released, but hey — at least fans can rest assured that it's actually happening.

While speaking with playwright Jeremy O. Harris for T Magazine, Rihanna finally confessed if the rumors about her recording a reggae album were true. The star's response? A fact-of-the-matter, "Yeah."

The speculation that she'd be devoting her ninth studio album to the genre first started swirling way back in May 2017, after a source told Urban Islandz that Rihanna's next project would involve collaborations with renowned reggae artist Buju Banton. "I can’t divulge any details about this but I can say that Buju has a lot of previously recorded unreleased material," the source allegedly told the outlet. "These are two great artists and you can only expect great music from artists of this quality."

Now, Rihanna didn't mention Banton by name during her interview with T Magazine. She did, however, respond to a few other artist-specific rumors in regards to her upcoming album. When asked if she was collaborating with Lady Gaga, the singer said, "No." She added that even though it's not "in the books right now," she's "not against it" in the future.

Harris then inquired about the potential for another collaboration with Drake, whom she's been linked to in the past, both professionally and romantically. "Not anytime soon, I don’t see it happening," she told the outlet. "Not on this album, that’s for sure." Gotcha. Noted. No dice on Drake.

In the years since her last release, Rihanna's fans — aka, the Navy —  have been (understandably) hungry for new material. As it will be her ninth studio album, they've long-been referring to her upcoming album as "R9" — which is exactly what she might end up calling it, thanks to them.

When Harris asked about potential titles for the reggae drop, Rih admitted, "so far it’s just been R9, thanks to the Navy. I’m about to call it that probably, ’cause they have haunted me with this 'R9, R9, when is R9 coming out?' How will I accept another name after that’s been burned into my skull?" Fair enough.

Harris pointed out that if she does, in fact, decide to go with R9, it'd be "this gift to the fans who have been most hungry for it." The star then replied, "That would be cute." Cute enough to come to fruition? Fans will just have to wait and see.

That's pretty much the extent of what she was willing to reveal to T Magazine about her upcoming album, but it's exciting to hear that new tracks are on the way. While she did say last year that she'd be releasing it in "2019," it's unclear whether or not that's still the case now. Either way, it's definitely happening, and it's safe to assume that it'll be filled with hits.