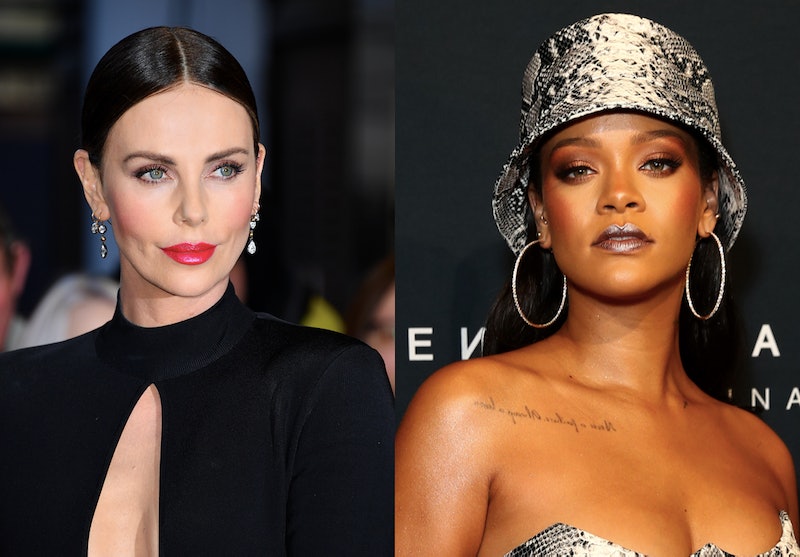 Charlize Theron should feel pretty good about herself. The actor is a mother of two, an Oscar and Golden Globe winning sensation, and star of the upcoming comedy Long Shot. But according to Theron herself, there’s another lady who will always come first in the eyes of her publicist, and she has made it known. Rihanna trolled Charlize Theron in the most savage way, and honestly, it will make you want to be trolled by Rihanna yourself.

Theron made the hilarious confession during an appearance on Late Night With Seth Meyers Wednesday, May 1. To clarify, she is a huge fan of Rihanna, as is host Seth Meyers, but the actor said sharing a publicist with the superstar can be challenging. ”It’s tough,” she said. “You want your publicist to like you, you want to think your publicist thinks you're worth putting out there in the world and that has to come from a very authentic place. It’s hard when your other client is somebody like Rihanna.”

Jokingly, Theron said that she knows her coolness level will never reach that of Riri’s, which most people could never hope to achieve, but she still thought her publicist genuinely adored her regardless. "I always really sincerely thought that my publicist really loved me,” she told Meyers.

Meyers assured her that she does, because who wouldn’t, but Theron received a harsh truth about her relationship with her publicist thanks to some birthday messages. "So for my birthday, she always sends me a little text," Theron continued, speaking about her publicist. "She was just like 'Happiest birthday.’ She didn’t even write birthday she just wrote 'b-day.'"

As it turns out, her publicist's message to Rihanna on the singer's birthday was a lot more gushing, and Theron was told that there was a pecking order through a hilarious joke from the singer. "Rihanna had made a t-shirt of the birthday greeting that my publicist gave her, which literally was like 'To my favorite, most favorite client ever, have the best...'," Theron said. "Rihanna wrote in the following e-mail, 'I'm making a t-shirt of this and sending it to Charlize,' and I don't think my publicist Amanda ever thought that was gonna happen." But, alas, the publicist was wrong, because Rihanna did get those messages printed on a t-shirt for Theron, much to her surprise.

Sadly for her publicist, but thankfully for us, Theron brought the actual T-shirt to the late night show, giving viewers a look at one of the most epic celebrity pranks in history. The exact message to Rihanna was "Hope you are having a blast." RiRi's plan to send the t-shirt was so effortless and masterful, it could have only come from her. "It made me feel great," Theron joked.

Of course, the actor took the jab in stride and looked at the bright side of the situation. "She took the time to tell her assistant to make me a t-shirt, and that is really cool," she said on the show. Most people would probably be very jealous of her one-of-a-kind Rihanna original design. May Rihanna's trolling ways live on forever.

More like this
Lindsay Lohan & Jonathan Bennett Celebrated Mean Girls Day Very Differently
By Jake Viswanath
What Is Miles Teller’s Net Worth? The 'SNL' Host's Bank Account Is No Joke
By Meg Walters
Lin-Manuel Miranda & Tituss Burgess React To 'Little Mermaid' Casting Backlash
By Radhika Menon
An Extremely Messy Ranking Of What Actually Happens In 'Don't Worry Darling'
By Chloe Foussianes
Get Even More From Bustle — Sign Up For The Newsletter