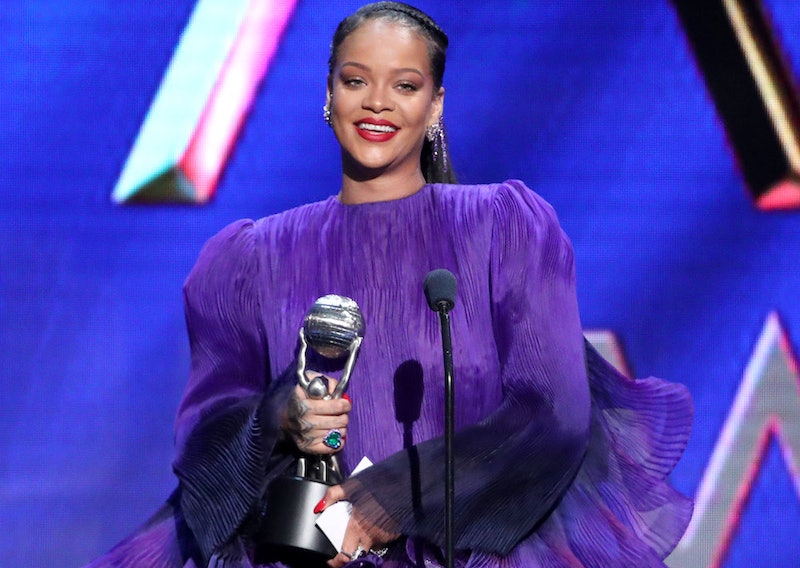 Singer, businesswoman, activist, and philanthropist Rihanna delivered a poignant NAACP Image Awards speech on Saturday that called on others to "pull up." During the ceremony broadcast live on BET, the Fenty Beauty mogul received the 2020 President’s Award from NAACP President and CEO Derrick Johnson for her distinguished work in philanthropy. In her speech, Rihanna called for unity in an otherwise divided world and encouraged individuals of other races to be allies to one another.

“Tonight is not really about me, because the purpose is bigger than me, right?” the singer said in her speech. “If there’s anything I’ve learned, it’s that we can only fix this world together. We can’t do it divided. I can not emphasize that enough. We can’t let the desensitivity seep in. The ‘If it’s your problem, then it’s not mine.' ‘It’s a woman’s problem.’ ‘It’s a Black people problem.’ ‘It’s a poor people problem.’”

She continued, “How many of us in this room have colleagues and partners and friends from other races, sexes, religions? They want to break bread with you, right? They like you? Well then, this is their problem, too. So when we’re marching and protesting and posting about the Michael Brown, Jrs. and the Atatiana Jeffersons of the world, tell your friends to pull up.”

Rihanna’s history of philanthropic efforts include the launch of the Clara Lionel Foundation to fund education and healthcare in impoverished countries, a collaboration with Prince Harry to raise AIDS awareness, and a campaign with UNICEF to assist children impacted by natural disasters. The NAACP announced the pop star as the recipient of the President’s Award in early February. JAY-Z, Condoleezza Rice, and Lauryn Hill are among the past recipients.

“Rihanna has not only enjoyed a groundbreaking career as an artist and musician, but has also distinguished herself as a stellar public servant,” Johnson said in an initial statement, per Rolling Stone. “From her business achievements through Fenty, to her tremendous record as an activist and philanthropist, Rihanna epitomizes the type of character, grace, and devotion to justice that we seek to highlight in our President’s Award.”

The award comes after a whirlwind year for the pop star. Along with various Fenty Beauty and Savage x Fenty drops, Rihanna released a visual autobiography book last October and has an Amazon documentary in the works. She’s also been teasing her upcoming album R9 — a project that fans have long been awaiting and asking for. But her speech makes one thing clear: her passion for activism comes first.

More like this
Twitter Is Freaking Out Over Rihanna’s 2023 Super Bowl Halftime Show Announcement
By Stephanie Topacio Long
Everything To Know About Taylor Swift’s 10th Studio Album, 'Midnights'
By Grace Wehniainen and Jake Viswanath
Is Dua Lipa Dating Trevor Noah? New Photos Show Them Kissing & Hugging
By Brian Anthony Hernandez and Martha Sorren
Lizzo Twerks While Playing James Madison's 200-Year-Old Crystal Flute Onstage
By Radhika Menon
Get Even More From Bustle — Sign Up For The Newsletter