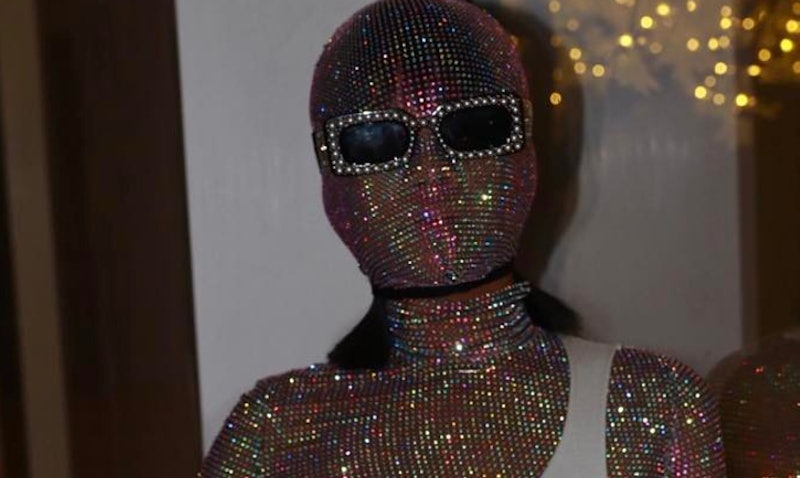 Rihanna isn't usually one for recycling when it comes to fashion. Her looks are always fresh and unique, and she's always moving (fashion) forward. Rihanna wore a sparkly bodysuit underneath jean shorts and a tank at Coachella. While this is unlike any Coachella look you've ever seen, Rihanna's crystal bodysuit indirectly took its inspo from one of her most iconic outfits. It was also right off the runway, according to Revolve.

Remember when Rihanna picked up her CFDA award back in 2014? She wore a see-through Adam Selman ensemble and even told Vogue that her sole regret was not wearing a "bedazzled thong" with her unforgettable dress, which was a thoroughly Rihanna take on the "naked" frock trend. It was sexy AF, it was risque, and it was undeniably Rihanna.

For Coachella, Rihanna wore a sparkly bodysuit that looked chain-like. She topped it with a torn and tattered denim shorts, a black studded belt, and a white Gucci tank with a message about common sense scrawled on it in marker. It reminded me of her CFDA gown.

The bodysuit also had a head cover, which Rihanna wore in one pic and didn't in another. Instead, she rocked black, futuristic sunglasses and a blunt bob with bangs, which is a style she has worn before and is very French girl chic.

This is what we call "owning" it.

A sparkling, crystal-encrusted bodysuit with tough boots? Yep, that was Rih's Coachella ensemble.

Rihanna's look was right off the runway... because of course it was.

Because she's Rihanna, that's why. She brings high fashion and runway looks to a music festival in the desert.

Here's Rihanna being self-referential in the most original way. This was her 2014 CFDA Awards outfit. Sure, the presentations were different, but the spirits are similar.

Rihanna has also rocked the blunt bob and bangs combo in the past. While she doesn't recycle often, when she does, it leaves a mark.

Rihanna took it from the runway to IRL... and that's why she stood out from an array of fringe, summery dresses, fringe, flower crowns, and more fringe at Coachella 2017.

Here's another Rihanna outfit. Over-the-knee white leather boots and a denim shirt... or coat? Once again, the fashion icon brought it.