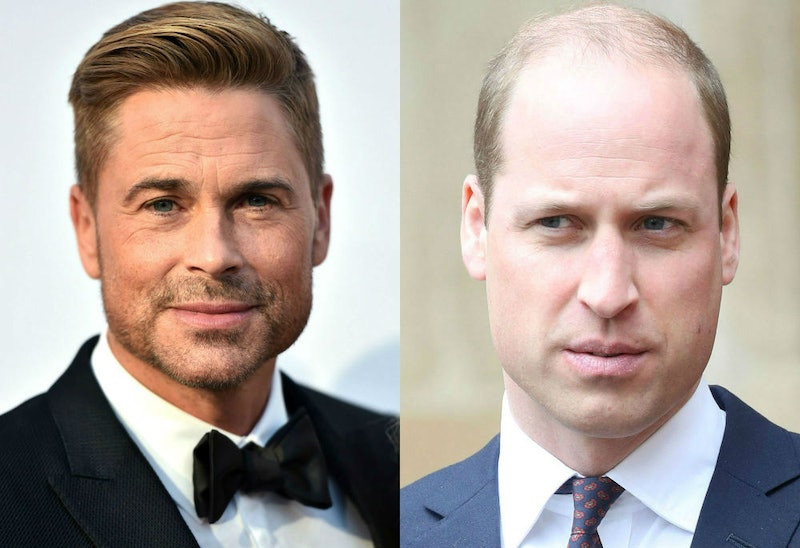 Plenty of people aren't happy with this former Parks and Recreation star. Recently, Rob Lowe commented on Prince William's hair loss, and now he's facing some backlash online. During an interview with The Telegraph that was published on May 28, Lowe discussed the Duke of Cambridge's hair. When William started to lose his hair, Lowe said the circumstance was "one of the great traumatic experiences of my life." While it's currently unclear if he was just joking, this comment, among others, has caused Lowe to receive criticism. (Bustle reached out to Lowe's reps for comment on the situation, but didn't receive an immediate response.)

As reported by Us Weekly, The Telegraph asked Lowe if he thinks he's "more or less vain than British men." His response? "That's a low bar! Can we talk about William?" Lowe continued,

"I mean, the future king of your country let himself lose his own hair, so when I say British men set a very low bar … Honestly, one of the great traumatic experiences of my life was watching Prince William lose his hair. He's going to be the f*cking king of England!"

"There's a pill. The first glimmer that a single hair of mine was going to fall out, I was having stuff mainlined into my f*cking veins. And that’s what I did for the next 30 years."

Now there are many Twitter users who are upset with the actor. Below are just a few of the responses across the social media platform.

Standing Up For William

An Apology Is Needed

This person believes Lowe should apologize.

As you can see, this individual thinks making fun of anyone for losing their hair just isn't OK.

There's no denying William hasn't hid his hair loss from the world.

This person wants Lowe to think about how William would feel about his comments.

The fan above summed up their thoughts pretty clearly.

William certainly has a bunch of people supporting him following Lowe's comments. It's important to also note that William has personally joked about his own hair loss. In January 2018, Us Weekly reported that William told a hairstylist in September of 2017, "I don't have much hair; I can't give you much business."

According to E! News, after Kate Middleton gave birth to Prince George in 2013, William joked that George had "way more hair than me, thank God!" Of course, Prince Harry has also teased his older brother about his hair loss. In February 2010, the Herald Sun reported that Harry said about an official portrait with William, "I don't know, I'm a little bit more ginger in there than I am in real life, I think, I don't know, and [William] got given more hair so, apart from that, it is what it is, but no its nice, it could have been worse."

As for Lowe's comments, it's hard to tell if he was truly joking around or if he meant every word coming out of his mouth. Whatever the case, William's fans don't find Lowe's remarks funny and continue to support the prince.

More like this
Kate Middleton's Kids Had A Brutal Reaction To Old Snaps Of Her & Prince William
By El Hunt
Prince George Made The Cheekiest Comment About Prince William
By Sam Ramsden
Tyler Perry Makes Rare Comment About Meghan Markle & Prince Harry's Love Life
By Radhika Menon
Everything To Know About Taylor Swift’s 10th Studio Album, 'Midnights'
By Grace Wehniainen and Jake Viswanath
Get Even More From Bustle — Sign Up For The Newsletter