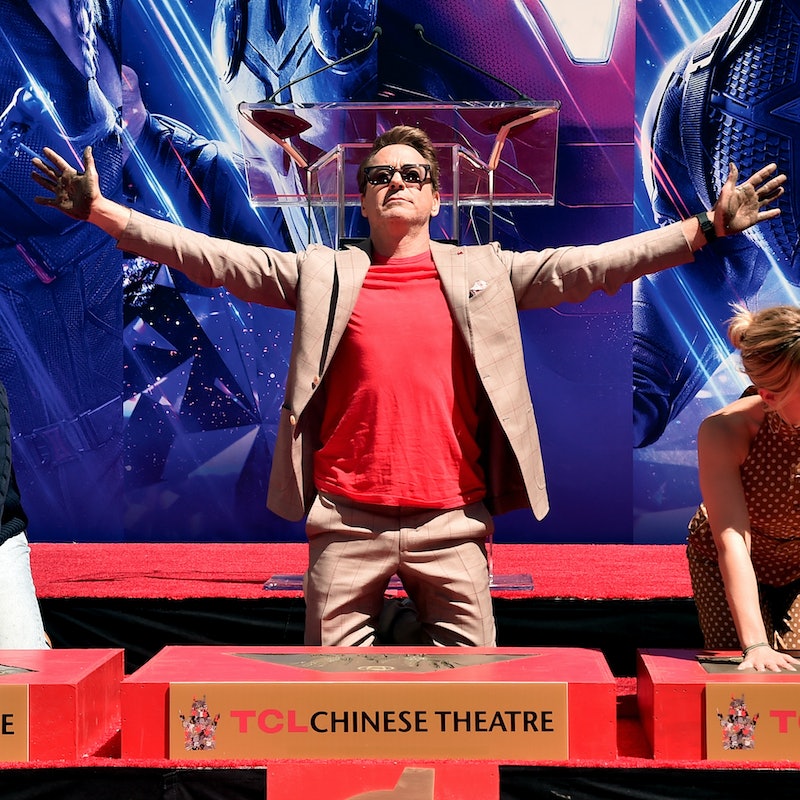 Avengers: Endgame has been out for almost a month and it's already proved to be one of the biggest movies ever. It also brought together ten years' worth of Marvel movies and actors in a finale of sorts. Spoilers for Avengers: Endgame ahead. Iron Man, being one of those that ended their journey in this movie, is a particular sore subject for fans. So it's understandable that Robert Downey Jr.'s last day on the Endgame set was as epic as Iron Man himself.

Downey shared footage form his last day on set on Instagram Thursday, May 16. The video shows RDJ on a multicolored-lit set, addressing a large circle of cast and crew. "And I've got a lot of feelings. But I'm gonna take Chris' leave and save it for Instagram," he joked. Considering the amount of behind-the-scenes videos and pictures Chris Evans has posted on Twitter, odds are Downey was referring to Cap when saying "Chris." (Though, it's worth noting that Evans does not have a public Instagram. Is there something you want to tell us, Downey?) In the video, Downey then went around hugging important people, like executive producer Trinh Tran and co-directors Joe and Anthony Russo.

After Endgame, all fans had "a lot of feelings" about Downey wrapping the movie, too. In the film, Iron Man dies, marking the end of the actor's MCU journey. The death of the beloved character hit particularly hard considering he's the one that started it all with Marvel Studios' Iron Man. So saying goodbye to Iron Man is tough, but then realizing that means goodbye to RDJ, too? It's heartbreaking, to say the least.

Downey isn't making it easy, either. He's been posting up a storm of behind-the-scenes footage on Instagram, and it's more salt in the wound each time. One such video included a closer look at Downey and Tom Holland filming their reunion scene after Hulk's snap.

"Stark and Parker reunited... #Spidey senses tell me a few of you were hoping for this moment...," Downey wrote in the caption. "... #TeamStark #thankyou It’s #movie magic baby..."

And of course, Downey couldn't let fans live without seeing final shots of Iron Man snapping Thanos out of existence. "#tbt #bts @avengers In the stills of the night... #TeamStark #thankyou (📸 @jimmy_rich ) #3000," he wrote. It's one thing to know the Marvel actors are working with green screens a majority of the time. But it's another to see pictures of them filming in real life and realize how much it must take to show that much emotion with nothing but green all around.

Of course, it's not all sadness at what's gone in that bittersweet BTS footage. He also posted lovely shots from the Women of Marvel lunch he hosted. Oh, to be a fly on the wall at that lunch would have been amazing.

Robert Downey Jr. really is the coolest and Iron Man will be missed. But if the early trailers for Spider-Man Far From Home are anything to go by, his memory will still forever live on in the MCU.

More like this
Lin-Manuel Miranda & Tituss Burgess React To 'Little Mermaid' Casting Backlash
By Radhika Menon
The 50 Most Powerful Characters In The Marvel Universe, Ranked
By Johnny Brayson and Nola Pfau
Nicola Coughlan Shared A Lady Whistledown Excerpt From ‘Bridgerton’ Season 3
By Grace Wehniainen, Alyssa Lapid and Sam Ramsden
Margot Robbie Breaks Her Silence On *That* Viral 'Barbie' Moment
By Maxine Harrison
Get Even More From Bustle — Sign Up For The Newsletter