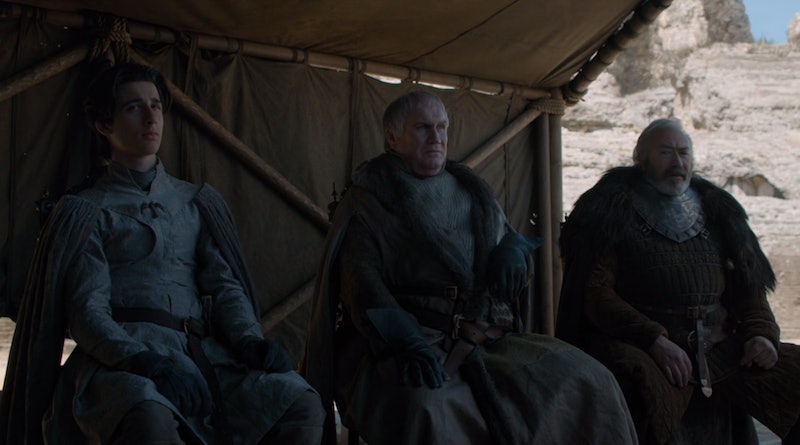 The Game Of Thrones glow-up is real. After last night's GoT finale, Twitter couldn't stop sharing the return of Robin Arryn Game of Thrones memes. And those posting these memes were very surprised by this unexpected final hour reveal — and also very, very thirsty.

Honestly, you can't blame Game Of Thrones fans for being surprised by what they saw in the series finale when the camera panned to the son of Lysa Arryn who is best known for being breastfed for way, way too long. The last time we saw him he was still a nerdy kid who had lost his mom to the Moon Door and didn't have any BDE to speak of. In fact, it's probably safe to assume that no one was really that concerned about where he'd end up.

But once fans spotted the now 19-year-old Lord of the Eyrie, Defender of Vale, and Warden of the East looking rather dapper at the council meeting in "The Iron Throne," fans were happy to see he was one of the Game Of Thrones characters that survived. Robin's final appearance also earned him a new nickname courtesy of Vulture: "Hot Milk Boy." Yes, this might make many of us want to go get some milk.

More importantly, though, it had many fans wanting to share their newfound Robin Arryn standom with the Twitterverse. And thank the Lord of Light for what you're about to receive, which is some of the best post-finale GoT takes anyone could possibly ask for.

Sure, Tyrion somehow managed to live, but did you get a good look at Robin Arryn?

2. A Toast To The Harry Potter Effect

Like Neville Longbottom before him, Robin Arryn will now be remembered for his glow-up and honestly, that's way better than being known for being breastfed way into his double digits.

A water bottle in Game of Thones? We didn't see any rogue water bottle, thanks to those dreamy eyes of Robin (not Robert) Arryn. But honestly, who can remember anyone's name when they look this good?

5. The Real Lesson Of Game Of Thrones

A reminder that milk on its own doesn't always do a body good.

7. Robin Arryn Can Get It

No one would blame fans for questioning what they saw in the GoT finale. It was rather jarring, but oh so satisfying.

9. We Stan This Lord

Who knew that in the end it would be Robin Arryn that so many would want to bend the knee to? Sorry, not sorry Bran the Broken.

Don't worry, the actor who plays Robin Arryn, Lino Facioli is as surprised as anyone. "Definitely didn't expect my morning to start off like this," Facioli tweeted about the Twitter admiration. Hate to break this to him, but this might be his mornings for a long time coming.

More like this
Alicent's Green Dress In 'House Of The Dragon' May Be An Act Of War
By Kadin Burnett
Nicola Coughlan Shared A Lady Whistledown Excerpt From ‘Bridgerton’ Season 3
By Grace Wehniainen, Alyssa Lapid and Sam Ramsden
Viserys’ Fate On 'House Of The Dragon' Could Differ From The Book In This Surprising Way
By Grace Wehniainen
'House of The Dragon' Episode 6 Will Take Place A Decade After Episode 5
By Kadin Burnett
Get Even More From Bustle — Sign Up For The Newsletter