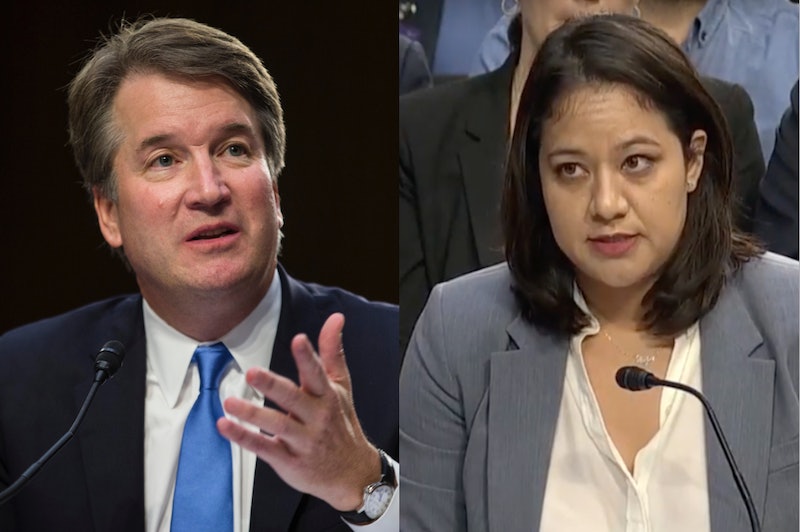 On the fourth day of Brett Kavanaugh's confirmation hearings, legal experts testified on the Supreme Court nominee's previous rulings. Among them was attorney Rochelle Garza, who took on Kavanaugh last year while representing an undocumented teenager seeking an abortion in Texas. On Friday, after her testimony, Garza spoke to Bustle about how the undocumented teen's abortion case may shed light on Kavanaugh's rulings on future cases concerning reproductive health care — and just how crucial it is to fight for immigrant and women's rights in this moment.

In 2017, a Texas courthouse appointed Garza to represent a 17-year-old undocumented teenager — known as "Jane Doe" to preserve her anonymity — as she sought a judicial bypass to obtain an abortion. In Texas, a judicial bypass is the only way a minor can get an abortion without parental consent.

However, as Garza explained in her Friday morning testimony, Jane had to navigate a number of hurdles in her pursuit of a judicial bypass. When a district court passed a temporary restraining order to prevent the Office of Refugee Resettlement from blocking abortions for Jane and other pregnant undocumented minors, the government appealed the decision. Kavanaugh, Garza said, was on that three-judge panel on the U.S. Court of Appeals that considered the appeal.

Garza told the Senate Judiciary Committee that Kavanaugh ultimately passed down an order that delayed Jane's abortion for so long that she was nearly forced to carry her pregnancy to term. (Texas law bans abortions after 20 weeks.) According to Garza's testimony, Kavanaugh's order would've given the government 11 more days to find a sponsor for Jane — even though they had failed to find one after six weeks — and would have then obligated her to restart the judicial bypass process if the government was once again unsuccessful.

"The pain that this caused Jane is something I can’t even describe," Garza told the committee. "Knowing that her life’s path, whether she would be forced to carry a pregnancy to term, was completely in the hands of people she would never know made her feel desperate, hopeless, and alone."

The American Civil Liberties Union ultimately convinced the full appeals court to overturn Kavanaugh's decision, and Jane was able to obtain an abortion when she was 15 weeks pregnant. Because of Kavanaugh's decision, she had to delay her abortion by a full month, the ACLU said in a statement, and came close to exceeding Texas' 20-week limit on abortions.

In the aftermath of her testimony, Garza tells Bustle that Kavanaugh's decision in Jane's case — which became known as Garza v. Hargan — makes her worry about Kavanaugh's future rulings in similar cases.

"I think that he will probably issue decisions in the same way he did in the Jane case," Garza tells Bustle. "The issue is, that's a ban on abortion, and if anything, that's an undue burden, so I'd be hard-pressed to see what an undue burden looks like for him."

In 1992, the Supreme Court ruled in Planned Parenthood v. Casey that states could not place an "undue burden" — a state regulation that "has the purpose or effect of placing a substantial obstacle in the path of a woman seeking an abortion" — on anyone seeking an abortion. In the case of Garza v. Hargan, Garza argued that Kavanaugh placed an undue burden on Jane by effectively delaying her abortion.

On Wednesday, Kavanaugh told the Senate Judiciary Committee that Roe v. Wade set an "important precedent" for abortion rights. However, Garza indicated that Kavanaugh's ruling in cases like Garza v. Hargan did not seem to apply that precedent.

"He did say in that opinion that Roe v. Wade is settled law, but he just didn’t apply it to the facts," Garza tells Bustle. "He just didn't even consider it, necessarily, so the issue is, you have settled law — why aren't you using it? How are you coming up with this other decision? ... You have to remember, Jane did everything right."

For Garza, taking cases like Jane's is important to her because she firmly believes that "justice isn't justice if it isn't for everyone." Garza says:

This is an issue of self-determination, and if we don’t have these rights, how are we going to be able to meaningfully participate in society? We all have to fight for our individual rights and for our collective rights and in this climate right now, where everything is so divisive, we really need to show that we’re a community and that we need to protect every single member of our community."

Although Garza tells Bustle that she can't know with certainty how Kavanaugh will rule in future cases, she is concerned about his potential to further jeopardize certain rights for marginalized groups:

"Based on his reasoning and the way that he decided [Garza v. Hargan], I don’t believe that he believed what Jane went through was either a complete ban on abortion or an undue burden and that does give me pause, because you know, this was a special instance in which someone was in detention — in immigration detention, a minor," Garza says. "It could snowball from there. If this had stuck, how worse can it get for women in this country, how worse can it get for immigrants in this country?"