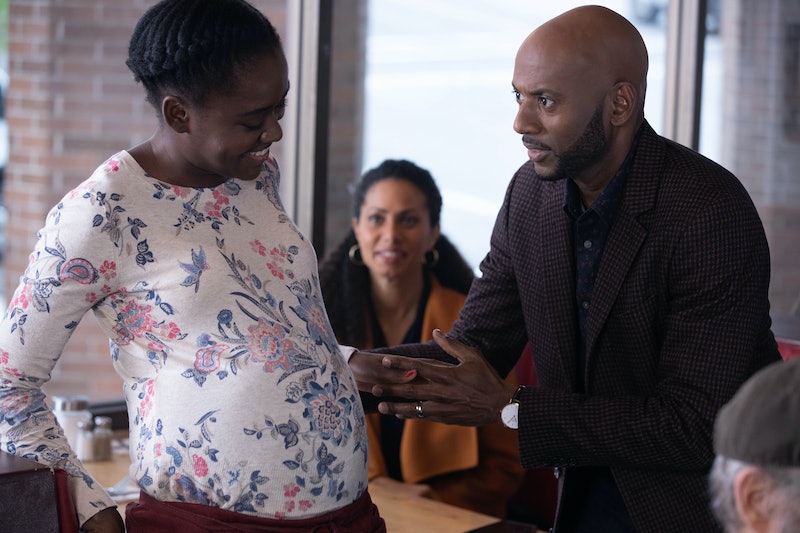 Spoilers ahead for A Million Little Things Season 2, Episode 13. Rome and Regina have found their birth mother on A Million Little Things as they move forward with their adoption process. However, there's already a wrinkle in their plans because of who the baby's father is. Eve, the couple's prospective birth mother, revealed that her ex-boyfriend had a bad temper. When Eve got pregnant, she moved from Philadelphia to Boston to protect herself and the child from its father. Her ex seemingly doesn't know she is pregnant, but he called her at the end of the episode — so he may know more than Eve wanted him to. Like potentially where she now lives.

When the call came through from a Derek Jones, Eve quickly declined it and gave a panicked look around the restaurant where she works as if he might have known she was there. He didn't seem to be there, but this conflict does seem to escalate at least into the next episode. Airing on Feb. 20, "The Sleepover" synopsis says, "Rome and Regina continue to try and protect their potential birth mother from her past."

In one of the photos from the episode, Regina seems to be talking to Katherine — perhaps to get some legal advice on how to best protect Eve and the adoption? Check them out.

However, the show may resolve the Derek Jones issue within that episode, because there's no mention of it in the Feb. 27 episode synopsis, which reads:

"Gary accidentally crashes Maggie's first date with a new guy, and Delilah is forced to have 'the talk' with Sophie. Rome has an important meeting with a Hollywood big shot, while Eddie teaches Dakota a tough lesson in what it takes to succeed in the music business."

The actor who plays Eve, Ebboney Wilson, will still be in the next two episodes at least, as she's listed in the press release for both Feb. 20 and Feb. 27. When Rome and Regina first met Eve, she was fairly far along in her pregnancy, so perhaps she gives birth and the adoption goes through in the next two episodes and then she won't be on the show anymore. Although knowing how much this show loves to keep connections between people alive, we could see her popping up now and again — especially if the drama with her ex is not quickly resolved.

When not acting on A Million Little Things, Wilson plays Kym on The CW's Legacies. She's also had small, one-episode roles on shows like Criminal Minds, The Rookie, Speechless, and Family Reunion. Her A Million Little Things arc is the second biggest project she's worked on of late. And it could get even bigger if her storyline goes on past the three episodes she's confirmed to be in.

Eve's ex not knowing about the baby does complicate Rome and Regina's adoption plan. He could show up in the final hour, make a claim for his parental rights, and stop the adoption from going through. His temperament means that him showing up unexpectedly could also endanger both Eve and the baby. Derek Jones is bad news all around, for sure. Show creator DJ Nash previously said to Deadline that Regina and Rome's adoption process won't be easy, which could indicate that things go south with Eve because of Derek. "There's a lot of challenges that the two of them will face," Nash admitted. "But they will face it like they always have, which is together."

That's the most that you can ask for in a complicated situation like this one. At least they now also have Eve's back as well, and hopefully they can keep her far away from Derek.