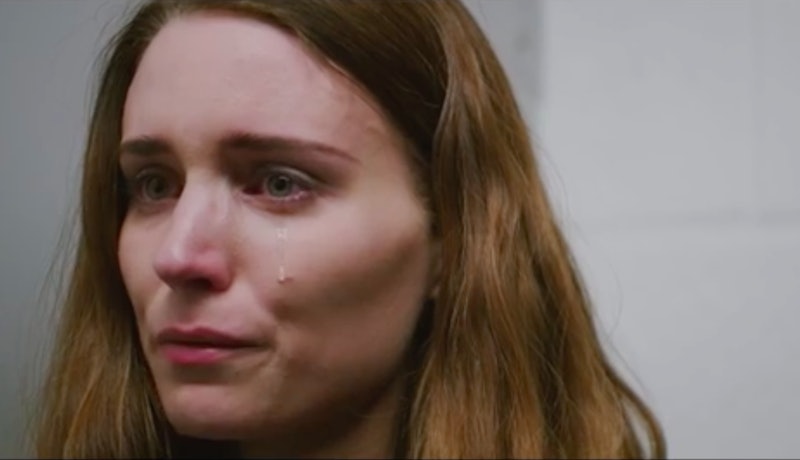 While sexual assault is always an extremely difficult issue to address, no two cases are the same and each individual case has its complexities. Rooney Mara stars in the upcoming film UNA, which explores sexual assault and how complicated certain aspects of it can be. Based on the 12-year-old play Blackbird, the film, which opens in New York on October 6 and LA on October 13, centers Una (Rooney Mara), a woman who seeks the middle-aged man who sexually assaulted her when she was just 12. Una is in dire need of answers and closure, and her journey to reuniting with Ray (Ben Mendelsohn) proves how heartbreaking, confusing, and challenging it is to understand assault and speak up about it.

In her late twenties, Una deals with the manifestation of emotions that have come from the abusive sexual relationship (which ended 15 years prior). After being shunned and ridiculed by her family and the community, when she was too young to understand what was happening or make an informed decision, she grew ready to confront the man who caused the trauma. The film depicts Una showing up unexpectedly at Ray's workplace after he's moved on with his life and she's lived a dark, isolated one.

But her unresolved feelings about Ray stem from her childhood and continue to conflict with one another. This clip shows a young Una who desperately wants to talk to Ray once the court case to convict him already began.

As part of the trial, adolescent Una is prepped for questions she may be asked. In the process, she asks if she can give Ray a message and her request is immediately denied. Into the camera, she asks, "Ray, where did you go? Why did you leave me? Ray, can you hear me?" Later, the tape is being watched by Ray in an isolated courtroom. In the trailer, an older Una says she was "a stupid girl with a stupid crush" when the assault took place.

Ray's jail time wasn't enough closure for Una, and understandably so. Although Una was on a mission to take control of the narrative when she tracked down Ray all those years later, the situation proved to be even more complex and layered when she got there. When the two ultimately have the tense confrontation, secrets and memories come to the surface as they attempt to make sense of their emotions and what had occurred. "I had a problem," Ray tells her in the trailer. "You were my neighbor's daughter. Not a target."

The trailer refers to David Harrower's play Blackbird as the one "that shocked the world." Harrower also served as the screenwriter for the film. The play takes place in one room, the break room at Ray's job (shown in the movie trailer as well), while life and the work day continue to move on around them. The show has been on for over a decade, performed in cities like New York and London.

For obvious reasons, the role was extremely difficult for Mara, especially since it was packed into a five-week shoot. "I had to go to some dark places," she told Screen Daily. But what drew Mara to the project was its ability to open up a difficult, yet very necessary dialogue and shed light on how complex assault cases, and the people involved, can really be.

"It doesn’t tie things up in a neat package," the actor told Screen Daily. "It’s not putting people in categories. It’s very complicated." By tackling this role, Mara is able to give voice to so many women who also seek comfort and answers. "I think that’s how it feels to be in the world. It is a dauntingly male environment," she continued. "It was my responsibility to portray the female and how that world has affected this woman."

Hopefully, the film will succeed in allowing people, and victims, to better understand themselves and one another.