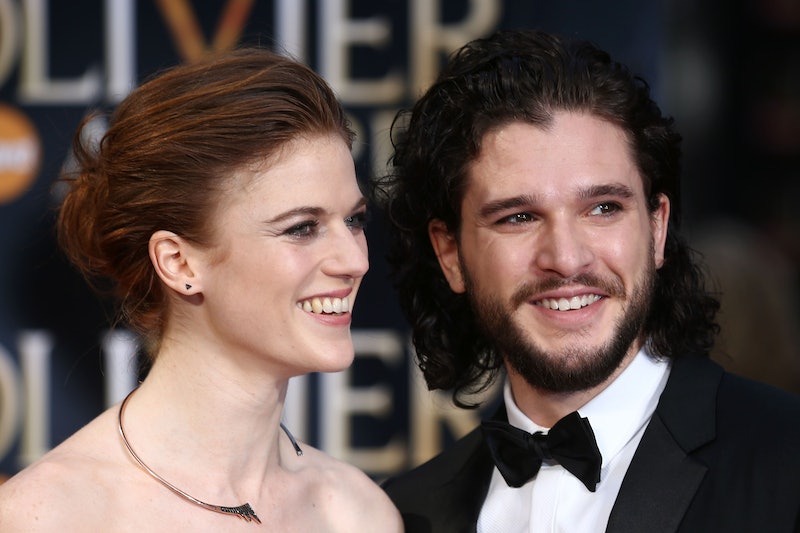 When your significant other wants you to embarrass yourself for their own sake, well, sometimes you give in and just do it. For example, Kit Harington wore a Jon Snow costume for Rose Leslie, he told heat magazine (via Cosmopolitan UK). According to the Game of Thrones star who plays Jon Snow, “She pulled out a Jon Snow costume, and Rose just whispered in my ear, 'I won't love you if you don't wear it... You should do it.'" That was all Harington had to hear, because he did it.

It was for party with a "bad taste" theme, which is a fantastic theme if done right. What's more in bad taste than coming as the character you play on TV? "It was really embarrassing. The people bringing around canapés were looking at me, thinking, 'You're sad man! You've come to a party dressed as your character.'" Leslie absolutely knew what she was doing and what makes it all the more amazing is that Harington didn't wear a costume from set. Oh, no, he put on a packaged costume, aka probably something similar to this.

Let's all take a moment to picture Harington walking around a costume party poorly dressed as the GoT character who he's known as worldwide. Everyone needs to thank Leslie for forcing him into it. Also, when is a picture going to be released of him in this costume?

This isn't the first time Harington has gone above and beyond for Leslie. Upon moving into together, he wanted to make sure she felt comfortable in his place. "I’ve moved in with my other best friend, Rose," Harington revealed on The Late Late Show with James Corden in June. "So, I’m very. very happy and it’s going well. She has all sorts of ideas for the house … I said to her, because she moved into my house, 'Look, darling, this is important that it’s our space, that it feels like our space and that you haven’t just moved into mine. Move anything you want around — change anything or chuck anything out.'"

What did she end up doing? Something Harington didn't anticipate, but that he ended up seemingly being OK with. "I went to the shops and I came back and said, 'What did you decide?' And she said, 'We’re moving the kitchen downstairs.'"

If that isn't enough, he also will never play another prank on her, because she told him so. This is a big deal, because the HBO actor loves pranking others. While appearing on The Jonathan Ross Show in October, the Emmy-nominated actor showed a video of the cruel, yet hilarious, April Fools' Day joke he played on Leslie.

If you haven't seen it, you can watch it below, but it involves the Downton Abbey star opening the refrigerator and discovering a fake severed Jon Snow head. As many also would, she let out a blood-curdling scream and fell to the ground in tears. "My family does April Fools; her family doesn’t do April Fools," he said. As for Leslie, Harington said, "She pretty much told me that if I ever did it again, that would be it. I think that’s marriage included."

The newly-engaged couple continues to prove why they are meant to be. As Harington told WinterisComing.net in March 2013, "We really get on as friends and we hit it off very quickly when we first met and I think that reflects on screen, because we've got a good dialogue going on off screen." That certainly seems to be the case, since they both speak the same language when it comes to making each other feel totally uncomfortable.