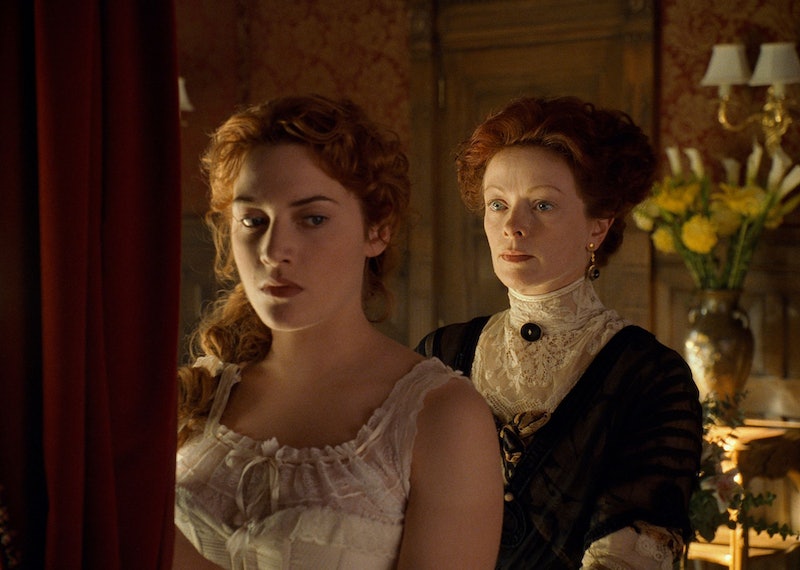 Though it was released 20 years ago, James Cameron's Titanic is a film that still holds court in popular discourse. Whether it's the famed director speaking out about the iconic door scene (Jack definitely couldn't have fit on that door, Cameron says), or Kate Winslet revealing that Matthew McConaughey almost played Jack Dawson, the inspired-by-a-true-story film is still entirely relevant two decades later. And now, one actor is speaking out about why you might still be watching the film all wrong. Because according to Frances Fisher, you should really stop hating on Ruth, Rose's mom from Titanic.

"People would come up to me and scream about how much they hated my character," Fisher says of the years following the film's 1997 release. But instead of feeling offended, Fisher says she would use the opportunity to educate the haters and fans alike about the truth of her character.

"Especially younger women and girls, I would tell them that you have to look at the social situation before you attack someone for their actions. My character was someone who had a very narrow outlook on the world and was in great desperation to keep her social standing," she says, explaining: "Women back then didn't have the right to vote. There were not many opportunities for women. If you had a chance to marry into a family that had money, at least then you could take care of yourself."

These ideas are expressed rather aptly in Fisher's most iconic moment — the corset scene. To recap: Rose is upset about her fiancè Cal's abusive behavior and Ruth explains to her daughter that Rose's father left them nothing but "a legacy of bad debts." Rose laments how unfair the situation is, and without missing a beat, Ruth says: "Of course it's unfair. We're women. Our choices are never easy."

At the time of filming, Fisher understood that this simple line of dialogue was the crux of the scene, but she had one suggestion to make to her director. "I remember saying to Jim, 'Jim, let me just say one more line. Let me just say, 'Marry Cal and then you can have affairs if you want to. Just secure yourself.'" And he goes, "Nah, nah, nah. You have to be the bad guy.'"

But even as the bad guy, her motives as a woman who had lost everything are understandable given the time period. Though we may never be fully on Team Ruth, it's easy to see how marrying her daughter to a wealthy man would secure them both in the best way she knew how. "She was someone who was desperate," Fisher says. "She lost everything because her husband was a liar and a cheat."

Women have come a long way since the days of the Titanic, but as any one of hundreds of headlines will attest, the issues women face are still, in 2017, nothing short of horrendous.

"We're still fighting the same battles. We still don't have equal rights. Women are still not getting paid equally across the board," she says. "We're still fighting to have birth control paid for by our employers. The fight goes on. This whole thing happening with Harvey Weinstein... he's just the tip of the iceberg — no pun intended."

Titanic, though 20 years old, is one entry point into having these tough conversations. "The whole point of telling stories like [Titanic] is to open a discussion and have a conversation."

Today, when Fisher is approached her unsavory role in Titanic, fans have a much different reaction. "They say, 'I really like what you did in that movie. You showed a certain type of character and it made me think.'"

And while Ruth was anything but progressive, the women who watched her on screen — then, now, and those yet to come — shouldn't be so harsh on her character, because in reality, she's giving them a lot to think (and talk) about.

More like this
James Cameron May Come To Regret His 'Titanic' Door Experiment
By Stephanie Topacio Long
At 28, Rosie Perez Risked Her Career To Stop Playing Stereotypes
By Gabrielle Bondi
At 28, Debra Jo Rupp Was Living A Much Different '70s Show
By Grace Wehniainen
Reese Witherspoon Confirms This Fan Favorite Will Return For 'Legally Blonde 3'
By Jake Viswanath
Get Even More From Bustle — Sign Up For The Newsletter
From hair trends to relationship advice, our daily newsletter has everything you need to sound like a person who’s on TikTok, even if you aren’t.