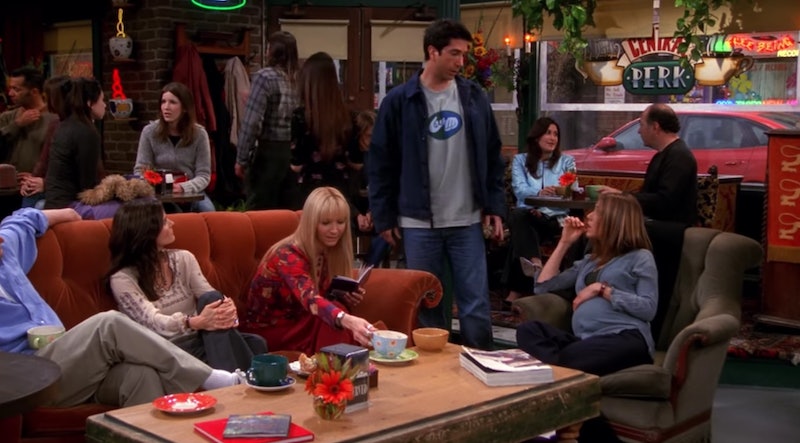 Everyone's favourite TV show Friends ended 15 years ago, but it still continues to be just as talked about today (whether good and bad) as it was back in the nineties and early noughties. There's a limitless amount of times you can re-watch the ten series, and certain channels (Comedy Central, I'm lookin' at you) on TV will just play them on a continuous loop for our viewing pleasure. And it turns out, fans are still finding out new things about the show all these years later. For example, one of Ross' t-shirts was a total Easter egg, and we didn't notice until now. Allow me to explain...

Friends fans on Reddit have revealed something rather clever that most of us probably won't have picked up on over the years: in one episode, Ross wears a T-shirt that says the word 'friends' in sign language. Cool, huh?

The t-shirt appeared in series 8, during episode 17, 'The One With The Tea Leaves.' As the name suggests, it's an episode which sees Phoebe reading the gang's destinies with tea leaves. As Pheebs is doing so, Ross comes in wearing a shirt with two hand symbols on it, which actually mean 'friends'. Ironically enough, Ross is talking about a shirt he left at ex Mona's house (his 'pink' shirt), which he loves and wishes he could get back.

The word 'friends' is indicated in American Sign Language by tapping your fingers together, which is what is shown on Ross' shirt.

In British Sign Language, you indicate 'friend' by holding your hands together, as if your two hands were shaking.

Reddit users enjoyed this new revelation about the show, with one writing: "Thats pretty cool, and something actually new I haven't heard before about the show."

What's more, one user even shared a link to a similar t-shirt you can buy if you want to covet the ever-stylish Ross. The t-shirt, featuring a blue, green and grey colour scheme, features the same sign language and will set you back £14.79 from redbubble.com. It's actually a men's shirt, but there are lots of different sizes available, so it can be suitable for anyone.

While I'm loving this new insight into the show, there are so many other 'little known facts' about Friends that may just blow your mind.

Did you know, for example, that three cast members from The Simpsons made guest appearances on Friends: Dan Castellaneta (Homer), Hank Azaria (Moe/Apu, etc.), and Harry Shearer (Mr. Burns/Smithers, etc.).

Also, according to Buzzfeed, apparently Ellen DeGenerous turned down an offer to play Phoebe! Who'd have thought it?! While I couldn't imagine anyone but Lisa Kudrow as Pheebs now, I have to admit, Ellen would surely have made a brilliant character!

And last, but certainly not least, it's reported that when the last series of Friends ended, Jennifer Aniston and her then-husband Brad Pitt had a dinner party at their home with the cast, and they served bottles of wine that producer Kevin Bright had saved from the first series. Oh my gosh, so much nostalgia!