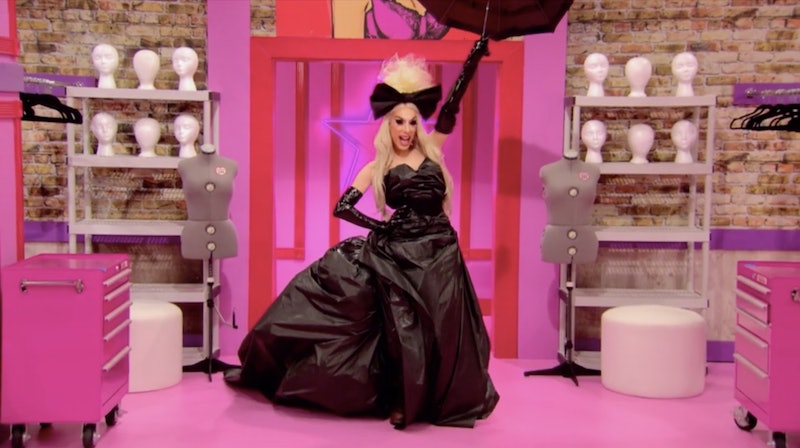 Alaska Thunderf*ck 5000 isn't afraid of John Carpenter movies, Count Dracula, or fierce reality-television competitions. She's a drag queen who rose to fame as a competitor on RuPaul's Drag Race; she was a finalist on Season 5, and won the show's game-changing second season of All Stars. In October, Alaska will appear on VH1's Scared Famous as one of 10 reality stars living in a haunted house in Savannah, Georgia and competing in challenges inspired by old horror films. The winner will be given a $100,000 donation to the charity of their choice. It's a high stakes scenario, but after two seasons on one of television's most grueling competition series, the odds are in Alaska's favor. What are some ghosts when you've been to drag bootcamp or created entire outfits from cotton candy? And, Alaska reveals in a phone interview that she's not scared of what's to come on the series.

"I love scary stuff and I’m also not really easily scared because, I mean, I spend a lot of time with drag queens, which is pretty terrifying on its own," she says "So I was looking forward to the challenge."

When Alaska first entered the RuPaul's Drag Race workroom wearing a horse mask and let loose her now-iconic "Hiiiiiiieeee" greeting, it pretty much guaranteed her stardom. Over 100 queens have appeared on the series, but the multi-talented performer is one of the show's most memorable. She has managed to turn her time on Drag Race into an illustrious music career, releasing two solo pop albums, Anus and Poundcake, and another titled Access All Areas with her drag-race supergroup, the AAA Girls. She's super funny, and makes regular appearance's on World of Wonder's web series. Her style is both glitzy and absurd; she's a self-described alien princess taking fashion cues from early-2000s Britney Spears. Tangled bouffants often sit on her head like scoops of ice cream. Alaska is a unique star, and she's is likely to bring some of this charisma, uniqueness, nerve and talent to the Scared Famous set.

The VH1 series will be hosted by the rapper Redman, and the competitors are stars from various reality series, like Tiffany "New York" Pollard from Flavor of Love and Eva Marcille from America's Next Top Model. The challenges are inspired by old horror movies, and at the end of every week a competitor will be sent home as "dead weight."

The classic horror movies that inspired Scared Famous don't spook Alaska, but they have inspired her drag. "I always liked Dracula, and I alway wanted to dress up as Dracula when I was a kid because he gets to wear white face makeup and dark black eyes and red lips, so basically Katya’s makeup," she says. "He also wears jewelry and a cape and a dress so I love that. I love Dracula, all of his iterations are always very sexy and mysterious."

The low-key glamour of the Count wasn't her only scary fashion inspiration, and like many drag queens, Halloween was a formative time in her life. Her other looks from her youth included a cow, a crow, and a clown, which she feels is especially noteworthy. "If that’s not foreshadowing I don’t know what is," she said of the latter.

These costumes were also some of her earliest adventures in makeup, which is not uncommon for young queens. "I think it’s a gateway for so many people because they get to dabble a little bit further than they would ever go," she says. "You know they say a billion drag queens are born every Halloween because it’s true. That’s the time when people get to try it as a joke and sort of get their toes wet, and then just see the magic and the power of it."

In a lot of ways being on VH1's new show reminded Alaska of her early years doing drag. Unlike on Drag Race, she was the only star participating in the competition in full drag. "I woke up early I got in drag every single day. It’s weird but it’s also cool being the only drag queen, I like it," she says of her time on Scared Famous. "It reminded me of what it was like when I was first starting out, amongst my friends I was the only insane person doing drag. So it was sort of like a return to my youth, and I liked that." The producers on the show and her co-stars were supportive of her choice to be in or out of drag. The outfit selections for the show were deliberate. "I sort of just let the situation speak to me and tell me what base desires were required," she says.

The series was also a chance to raise money for an important cause. Each contestant got to select a charity to donate to should they win, and Alaska chose the the Los Angeles LGBT Center. "I love the LGBT Center, and I think anyone who lives near or around Los Angeles has been touched by the Center in some way. They offer so many resources, especially to young people," Alaska says. "I mean these kids, they come out to their families and they are shunned and thrown out of their house and are homeless, and it’s really f*cking hard. The LGBT center is there and they offer so many resources." Per its website, the organization was established in 1969, and their programs include health services, social services and housing, culture and education, and leadership and advocacy training.

Scared Famous is guaranteed to push the stars into some terrifying situations, and, while Alaska may have been unfazed by most of what the show had to offer — she has plenty of real life fears. "I’m scared the world is going to end in like three years, because I mean I read this terrifying article about how climate change is an unstoppable train that is already in motion," she admits. "There’s literally no way we can stop it and it’s going to be cataclysmic way sooner than we think. So that’s actually kind of scary on the real; I don’t really want to see how that plays out."

So, for her sanity, Alaska practices self care. "I work, I mean it really is my therapy. I get to create and any time I get to go to that place when I’m onstage and I’m interacting with an audience, that’s spiritual communion to me," she says. "I like creating, I like performing and those are definitely reasons for going on. Because in the apocalypse they will need entertainment, so I’ll be there."

Alaska has been working hard in the time since Drag Race Season 5, but if there's any year that truly proves her love and dedication for the work of drag, it's this one. In addition to appearing on the VH1 show, she's put out new music and done a variety of Golden Girls themed performances. She just finished a nation-wide tour with the AAA Girls. When it ended, she immediately headed to the U.K. for a series of shows. And, you can catch her being maybe not so scared after all when VH1's Scared Famous airs on Oct. 23.