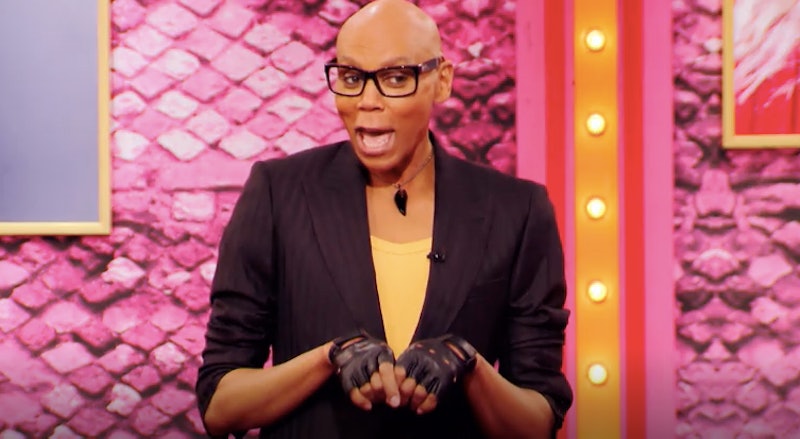 After flying under the radar for a few episodes, Miss Vanjie and Brooke Lynn Hytes finally had to face their drag mother about their budding romance, and RuPaul reacted to Branjie just like any parent. Upon discovering their relationship on Drag Race, Ru immediately jumped into interrogation mode. Like any good, nosy friend, he asked all of the right (aka embarrassing) questions. You know, the kind that made Brooke — the confident and graceful frontrunner — hide her head in her hands like a child. Everyone knows it came from a place of love, but that didn't make it any less funny.

In the May 2 episode, the queens grouped off for another team challenge — a magic show — when Ru began making the usual rounds to check in. Vanjie finally won her first challenge (it was a mini-challenge, but a win is a win), so she had the power to pick her teammates. She didn't choose Brooke, instead opting for Silky, A'Keria, and Yvie: "Team Personality."

"Why didn't Vanjie put you on her team?" Ru asked Brooke. "Aren't you guys very close?" He obviously knew the answer, he just wanted Brooke to spill some tea. "She didn't want our romantic connection getting in the way of our work," Brooke replied. "Is there really a romantic connection?" Ru asked. Brooke nodded. "Yeah," she said. "We have a situation-ship."

Then, the conversation took a turn for the dirty. "Have you slipped her the tongue?" Ru asked. Brooke stayed calm and collected. "Several times," she said with a laugh. "Have you slipped her your pinky finger?" Ru followed up. That's when Brooke lost it and started blushing, so Ru reeled it back in by asking about the race again.

"This is a competition," Brooke said with poise. "And I don't expect anything like that. I don't expect to be chosen for her team just because..." Ru interjected: "You're sticking her the pinky." Everyone busted out laughing and Brooke practically dissolved. "I feel like a 12-year-old girl," she laughed.

Leave it to Ru to cause the season's most austere queen to melt with embarrassment. He didn't ask much more about the seriousness of said situation-ship, but Brooke's disposition said it all. She definitely had feelings for Vanjie in that moment.

Ru asked Vanjie a few similar questions and she brushed them off with a joke, as she does. In her confessional, though, she said she was focused on staying in the race — not Brooke. "He's doing good in the competition," she said. "I need to worry about myself."

Neither Brooke or Vanjie have confirmed their relationship status post-filming, but Brooke recently told Bustle they're definitely still in touch. "We're great," she said. "Yeah, things are really really good. I just saw him the other week, he's doing well. He's a very special person in my life and he always will be. So, no complaints on that front."

Obviously, they both can't take home the crown, but if they're as close as Brooke hinted, they definitely left the competition with a special prize.