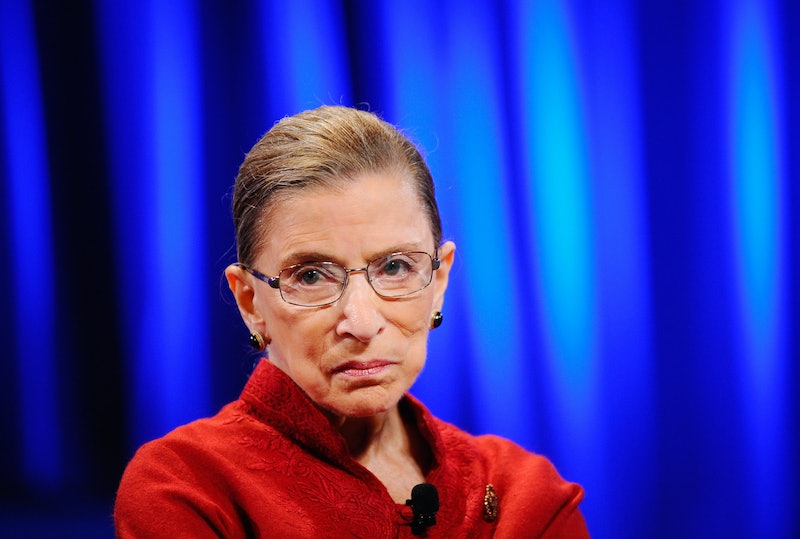 President Trump's latest Supreme Court nominee underwent some tough grilling by Democrats during his Senate confirmation. At an event Wednesday at George Washington University, however, Ruth Bader Ginsburg said that Brett Kavanaugh's hearings didn't go the way they should have, and pined for the day when Supreme Court nominees enjoyed bipartisan support in the Senate.

"The way it was was right. The way it is is wrong," Ginsburg said. "I wish I could wave a magic wand and have it go back the way it was."

"Think of Justice Scalia, who’s certainly a known character," she continued, adding that he was confirmed unanimously. "That’s the way it should be...instead of what it’s become, which is a highly-partisan show. The Republicans move in lockstep, and so do the Democrats."

To be sure, Kavanaugh isn't the first Supreme Court nominee to face a contentious, dramatic confirmation hearing.

When Ronald Reagan nominated archconservative judge Robert Bork to the court in 1987, Senate Democrats waged an all-out war against him, with Sen. Ted Kennedy famously warning on the Senate floor that "Robert Bork's America is a land in which women would be forced into back-alley abortions, blacks would sit at segregated lunch counters, rogue police could break down citizens' doors in midnight raids, and schoolchildren could not be taught about evolution." Bork's nomination was ultimately defeated by the largest margin Senate history.

Still, as recently as the 1990s, it wasn't unusual for Supreme Court nominees to receive votes from 90 or more Senators — something that's absolutely inconceivable in the modern day.. Ginsburg herself was confirmed on a 96-3 vote in 1993, and former Justices Anthony Kennedy, Antonin Scalia and Sandra Day O'Conner were all confirmed unanimously during the Reagan administration.

"The atmosphere in '93 was truly bipartisan," Ginsburg said Wednesday. "The vote on my confirmation was 96-3 — even though I had spent about 10 years of my life litigating cases under the auspices of the ACLU."

It's hard to pin down when or why things changed, but they did. Almost no Democrats voted for Samuel Alito, George W. Bush's last nominee; likewise, Barack Obama's first two nominees only received single-digit support from Senate Republicans.

As for Kavanaugh, it seems unlikely that he'll receive any Democratic votes, given the widespread and bipartisan belief that he would vote to overturn or gut Roe v. Wade if confirmed. Although several red state Democrats have left the door open to voting for Kavanaugh, the prospect of a Senate Democrat being the tie-breaking vote to confirm a justice who would shift the court's ideology in a decidedly more conservative direction is unthinkable in the current political climate.

Given Republicans' majority in the Senate, Kavanaugh is likely to ultimately be confirmed. But it's not a done deal yet: On Thursday, Democratic Sen. Dianne Feinstein revealed, in a cryptic announcement, that she had "received information from an individual concerning the nomination of Brett Kavanaugh to the Supreme Court" and subsequently "referred the matter to federal investigative authorities." She didn't say what the matter concerned, but Sen. Dick Durbin subsequently clarified that the information on Kavanaugh had been forwarded to the FBI.