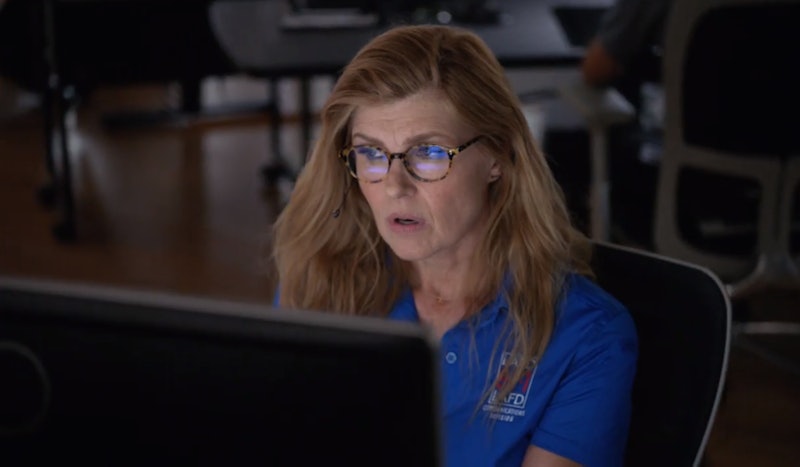 There's another Ryan Murphy show coming your way this January, TV fans. But unlike the creepy American Horror Story or true crime-focused American Crime Story, it's set to shine the spotlight on everyday heroes. Fox debuted the teaser for 9-1-1 starring Connie Britton, Angela Bassett, and Peter Krause during the World Series on Friday night, and seeing so many TV favorites in one place is sure to have you psyched for the new series. While Krause is a newcomer to Murphy's band of actors, Britton and Bassett are regulars who are returning to the fold as the show's female leads.

Right now, character details are hard to come by, but 9-1-1 will focus on the lives of 9-1-1 operators, firefighters, paramedics, and police first responders. These are the people who are on the front line of emergency situations big and small, and the series is set to explore both sides of the job. In a voiceover, Britton's character sums up what seems to be the series' philosophy in the teaser. She says,

To drive home the point, the preview juxtaposes a call that leads Krause and his team to a woman's home to deal with a python incident against an intense moment that features Bassett's policewoman heading into what looks like a potentially deadly situation. Like most of Murphy's show, 9-1-1 appears to be poised to mix humor with darker themes to produce a show that can change its tone from week to week.

As amazing as the cast is, the most interesting thing about the show so far is its choice to focus on an often overlooked profession. Being a first responder is one of the hardest jobs that a person can have. These are the people who are first on the scene during dangerous situations, and the ones who answer the phone when people are at their most vulnerable.

The late nights and dangerous situations these professionals deal with on a day-to-day basis are unthinkable for most people. But it's equally impossible to imagine life without the people who show up first on the scene of a fire, or who talk you through a crisis situation. Seeing a TV series put the spotlight on first responders in a way that could potentially show all aspects of the job — from the mundane to the terrifying — is a refreshing change of pace from the usual cop shows that populate network television.

Having actors like Britton, Bassett, and Krause in leading roles only makes the concept more exciting. The trio of TV veterans are being joined by Underground's Aisha Hinds, Prison Break's Rockmond Dunbar, American Crime Story's Kenneth Choi, and Into the Badlands' Oliver Stark. In addition to its strong cast, 9-1-1 has an impressive team working behind the scenes as well. The show is co-created by Murphy and his long time partner Brad Falchuk, and American Horror Story writer Tim Minear will serve as the series' head writer.

For those keeping count, 9-1-1 will bring the total number of Murphy shows in progress to six, including American Horror Story, American Crime Story, Feud, and upcoming series Ratched and the '80s set Pose. The prolific creator is continuing to diversify the stories he tells with 9-1-1, while relying on familiar faces to capture the attention of audiences that might usually bypass a procedural.

Even though the teaser is short, there's no denying that 9-1-1 looks like a promising addition to Fox's lineup. If it manages to bring attention to first responders and tell entertaining stories, then the network might just have a hit on their hands.