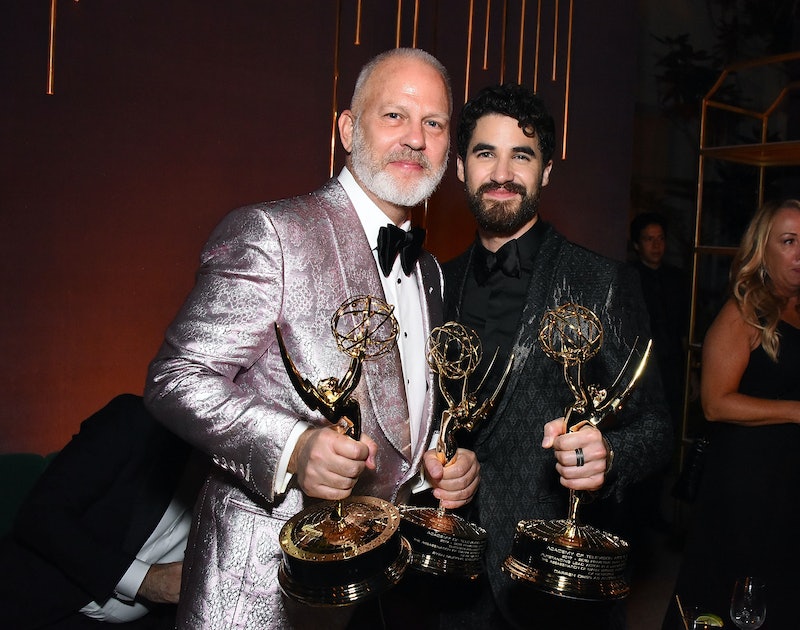 Have you missed having a dramatic, over-the-top Ryan Murphy show to distract you from the real world? Well, his next sensation is right around the corner, and thank God. Ryan Murphy's new Netflix show Hollywood will officially premiere on Friday, May 1, giving fans just a couple months to prepare for their next TV obsession.

Murphy's second Netflix show, following the Ben Platt and Gwyneth Paltrow-starring hit The Politician, will focus on a group of aspiring actors in post-World War II Los Angeles as they try to make it in a completely changed Hollywood. Each character will be faced with their own challenge that highlights biases against race, gender, and sexuality. As described in the official plot description obtained by Bustle, Hollywood "exposes and examines decades-old power dynamics, and what the entertainment landscape might look like if they had been dismantled."

Actors Criss and Corenswet, who have both starred in previous Murphy shows, will also serve as executive producers. In fact, it was Criss who helped Murphy come up with the series' concept. "@mrrpmurphy and I had dinner where he shared that he wanted to do a period piece that was young and optimistic. We landed on the idea of a series covering several narratives from 1940s Hollywood," he wrote on Instagram in September 2019. "Two days later Netflix bought it. Not only is that a testament to the magic of Ryan Murphy, it’s a reminder of the kind of thing that can only happen in Hollywood… literally."

Corenswet told The Hollywood Reporter that he was very grateful for the "learning experience" of being an EP on Hollywood, saying that Murphy wanted to include him and Criss in the creative process. "I'm not making any big decisions but I'm getting to watch a lot of these big decisions be made by all these extremely competent and successful people," he said. "It means that, at some point, I'll actually be helpful to somebody in some way."

Back in September 2019, Murphy told TIME that the show would “look at Hollywood and the sex industry, and how absolutely everything has changed and nothing has changed." So basically, it might take place in the 1940s, but fans should expect a devastatingly accurate depiction of the world we currently live in when the show eventually premieres.

More like this
Here’s Everything Coming To & Leaving Netflix In October
By Jake Viswanath
Nicola Coughlan Shared A Lady Whistledown Excerpt From ‘Bridgerton’ Season 3
By Grace Wehniainen, Alyssa Lapid and Sam Ramsden
The ‘Emily In Paris’ Season 3 Release Date Is Here, Plus The First Footage
By Bustle Staff
Devi Is Going To Meet A “Smoldering Bad Boy” In ‘Never Have I Ever’ Season 4
By Jack Irvin and Gabrielle Bondi
Get Even More From Bustle — Sign Up For The Newsletter