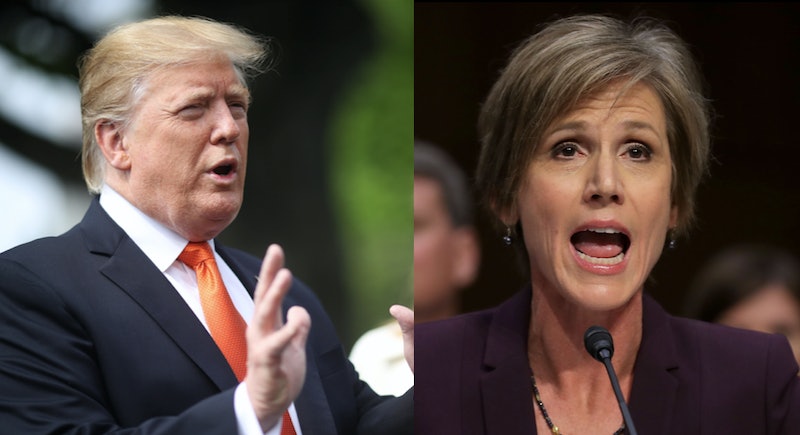 A former Obama-era appointee to the Department of Justice has said she believes President Trump's position as POTUS is shielding him from potential legal consequences. Speaking on NBC's Meet the Press, former deputy attorney general Sally Yates says Trump would be indicted on obstruction charges if he weren't the president. She pointed to her own experience prosecuting such cases.

"Well, you know, I've been a prosecutor for nearly 30 years. And I can tell you, I've personally prosecuted obstruction [of justice] cases on far, far less evidence than this," Yates said, per video of the interview circulated on Twitter. "And yes, I believe, if he were not the president of the United States, he would likely be indicted on obstruction." Bustle has reached out to the White House for comment.

In her interview, Yates referred to the redacted Mueller report, which was released to Congress and the public earlier in April. Special counsel Robert Mueller's team did not determine any collusion between the 2016 Trump campaign and Russia, but left questions of potential obstruction of justice open-ended. Yates said she was concerned about what the investigation revealed about Trump, in general.

"I think, really, the bigger issue is not just whether or not this establishes a crime that can be proven beyond a reasonable doubt, but is this the kind of conduct that we should expect from the president of the United States?" Yates said. "I mean, when the Russians came knocking at their door, you would expect that a man who likes to make a show of hugging the flag would've done the patriotic thing and would've notified law enforcement."

It's important to note that President Trump was not charged with any crimes associated with the Mueller report and the Special Counsel's investigation. The president has also maintained that he has not done anything wrong.

"I am an innocent man being persecuted by some very bad, conflicted & corrupt people in a Witch Hunt that is illegal & should never have been allowed to start - And only because I won the Election!" Trump tweeted on March 3. "Despite this, great success!"

Since the redacted report's release, Trump has continued to deny any wrongdoing, and has repeatedly said that he believed the investigation never should have taken place at all, according to his tweets. (He described the investigation as "illegal" as recently as last week.)

As both lawmakers and the public continue to digest the Mueller report, it remains unclear what the investigation's long-term ramifications might be, legally and culturally. And although Yates suggested that the presidency was shielding Trump from potential obstruction of justice charges, she stopped short of contending that Mueller should have done anything differently, or even come to different conclusions than the ones presented in the report.

"It's easy to sit in our armchairs and say what we would've done in those circumstances," Yates said. "I think what you see is that Robert Mueller did the job he was asked to do. And he called it right down the middle."