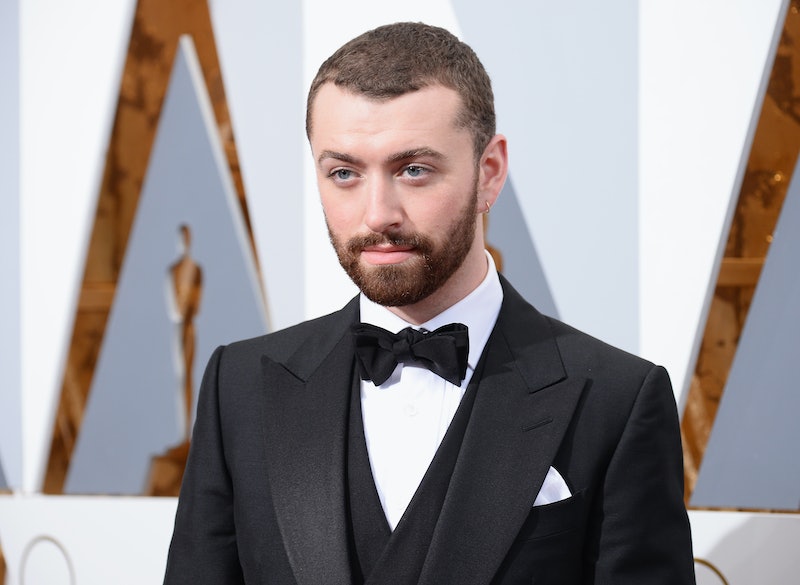 Only a few weeks stand between the world and Sam Smith's new album, The Thrill of It All. But even before the release, he's sharing something very important and very personal. In a new interview with The Sunday Times, Smith shared that he feels "just as much woman as man," after talking about his teenage years when he obsessed over Boy George. And even though he admitted that it's taken time for him to become comfortable with who he is, his words are so important to those who look up to him. In fact, his fans are already cheering him on.

In the three years since Smith's debut album, In The Lonely Hour, came out and scored four Grammy wins and seven nominations altogether, he's been doing a pretty solid job of staying out of the public eye. But now that he's back and promoting his new music, he's also sharing parts of his life that he's never been quite this open about before, and his honesty is incredibly inspiring. Not only did Smith share the fact that he wears women's clothing, but also that he was bullied because of it in his younger years. Even so, it seems he's prouder of who he is these days.

While talking to The Times, Smith said that although does he not feel like a cisgender man, he's not sure what title he'd use for himself. "I feel just as much woman as I am man," he said.

He also mentioned a drag shop he loves — House of Priscilla in Sydney, Australia — and revealed that he enjoys buying and wearing dresses and heels, which isn't a new hobby for him. He said:

"People don’t know this, but when I was 17, I remember becoming obsessed with Boy George and Marilyn, and all that. There was one moment in my life where I didn’t own a piece of male clothing, really. I would wear full make-up every day in school, eyelashes, leggings with Dr. Martens and huge fur coats, for two and a half years."

To so fearlessly be himself at such a young age is truly admirable, but as Smith explained, it didn't come without consequences. He added that even though some of his classmates respected him for it, others teased and physically bullied him for it, and that caused him to keep a "barricade" up.

Smith didn't just address his gender identity in the interview; he also spoke about the identity that he took on as a result of his career. He said:

"I remember, at the beginning of my career, being called a ‘gay singer’, and I didn’t want that. I wanted to be seen as a singer first, before people spoke about my private life. And now it’s changed — I’ve changed. I realize that maybe I don’t mind that title."

There are so many fans who are glad he feels that way, because after the interview went live, some of them took to Twitter to share their pride for Smith and the power he has to help people who may be experiencing the same things he has in the past:

That last fan is correct: Representation does truly matter, and now people who might identify the same way that Smith does have one of the world's biggest musicians in their corner, and that's a big deal. There is so much power in Smith's openness about gender, and it has the potential to open up conversations that could lead to more people understanding.

In his short career so far, Smith has a lot to be proud of, and sharing his truth with the world is certainly on that list. However he chooses to share his personal life with his fans, there are already plenty of people lined up to support him.