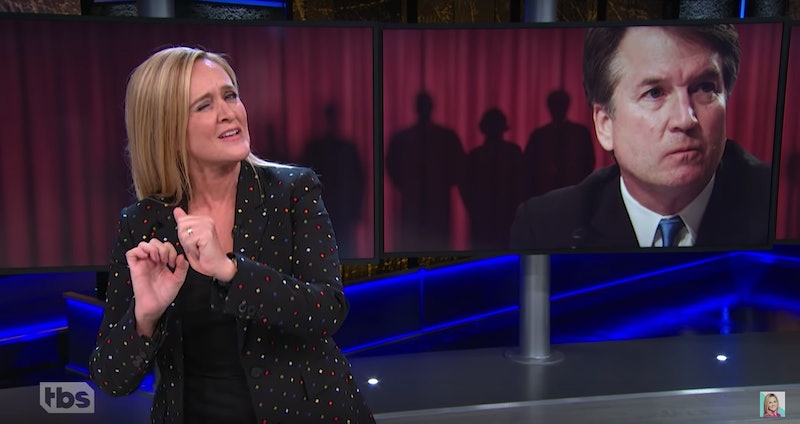 On Wednesday night at the beginning of her show, Samantha Bee's message to Brett Kavanaugh defenders was crystal clear: it's never acceptable to attempt to rape anyone, regardless of if you're in high school or not (Kavanaugh has denied the allegation). Bee was directly addressing the widespread conversation around Christine Ford's sexual misconduct allegation against Kavanaugh, which dates back to their high school years. Specifically, she was taking down the argument that some have been making about how people shouldn't be punished for what they supposedly did in high school.

Kavanaugh has since refuted the allegation by Ford, saying in a statement at the White House on Monday,

I have never done anything like what the accuser describes — to her or to anyone. Because this never happened, I had no idea who was making this accusation until she identified herself yesterday. I am willing to talk to the Senate Judiciary Committee in any way the committee deems appropriate to refute this false allegation, from 36 years ago, and defend my integrity.

As of now, Ford has not agreed to appear before the SJC, and has requested that an FBI investigation of her claim takes place prior to any Senate hearing.

Bee said of the conversation swirling around Ford's allegation,

All this is a horrifying window into a certain kind of privileged childhood that isn’t supposed to come with consequences, a view that Kavanaugh shares... "What happens at Georgetown Prep stays at Georgetown Prep." It’s kind of like my high school slogan: Toronto Tigers: We don’t rape.

Bee then went on to point out the irony of people not caring about Kavanaugh's alleged record with women when he could make decisions that help define legislation for their bodies if he's confirmed. She continued by calling him out for writing an argument in favor of preventing a 17-year-old immigrant from getting an abortion, citing her age as one of the factors influencing the decision. As it turns out, Kavanaugh would've been around 17 at the time of Ford's allegation, which he denies. And to be clear, the young woman was eventually able to procure an abortion by appealing the case to different judges.

Brett Kavanaugh is being considered to serve for life on the highest court of the land. The decisions he makes on the Supreme Court will impact women’s bodies for generations. Of course if he assaulted someone when he was 17 and lied about, it should impact him for the rest of his life. It sure as hell impacted her.

Not to mention Kavanaugh tried to block a pregnant immigrant from getting an abortion. He absolutely thought the decisions that a 17-year-old made mattered enough to permanently alter her life.

Bee concluded by asking people to do better than they did during the Anita Hill hearings. "It’s been 27 years since Anita Hill," she said. "Can we please try to be less horrendous about it this time? We’ve had enough of these '90s reboots. We’re good.”