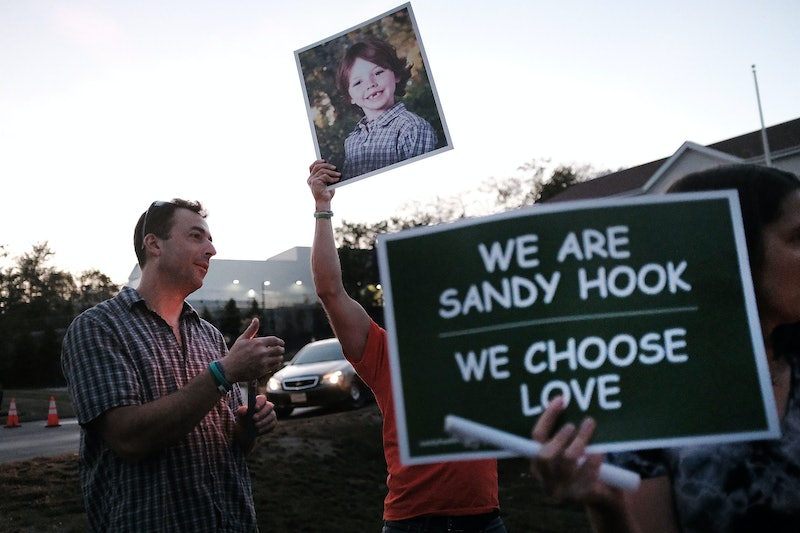 While the survivors of the shooting in Parkland, Florida, were old enough to organize a movement to fight gun violence themselves, the survivors of the 2012 shooting at Sandy Hook Elementary school were too young to do so. Their parents stepped up, though, and they've become a powerful force in the gun violence prevention movement. The Sandy Hook families have a gun violence prevention plan that's brought success in a previous public health crisis, as The New York Times reported — but it's going to require a long fight.

The families of the children who died at Sandy Hook Elementary are taking inspiration from the fight to bring the dangers of cigarettes out into the open, as The New York Times explained. In the mid-20th Century, research hadn't established the dangers of smoking, as History.com wrote. Doctors would advertise cigarettes on behalf of tobacco companies, and there was no regulation on who could use or buy cigarettes.

Even as the truth became known about how bad smoking tobacco is for your health, tobacco companies hid their knowledge and actively marketed it as healthy, according to the American Cancer Society. What it took in the end to get the tobacco industry regulated, then, were a series of lawsuits that forced tobacco companies to reveal the documents proving that they knew about their products' detrimental effects on people health.

The gun industry already has a layer of protection from people like the Sandy Hook parents, who might like to bring legal action against them after their products were used to commit crimes. Back in 2005, Congress passed a law blocking the gun industry from liability lawsuits, as the Times reported at the time. Because of this law, the manufacturer of a gun isn't legally liable when that gun is used negligently — even in a mass shooting.

The parents who lost children at Sandy Hook struck a blow to that law in March, though, when the Connecticut Supreme Court allowed a lawsuit that the group had filed against Remington Arms to move forward, as NPR wrote. The lawsuit claims that Remington used unfair advertising practices in marketing a military-style weapon — the gun used in the Sandy Hook shooting — to civilians, and that that was a violation of Connecticut law. Bustle has reached out to Remington Arms for comment on the lawsuit.

A major goal of that lawsuit, though, is to gather internal documents from Remington that might show something about the company's decisions and marketing strategies. Basically, they're going after exactly the same kind of documentation that brought the tobacco industry to its knees — proof that the industry giant marketed this particular military-style weapon to vulnerable buyers while fully aware of the damage it could cause, according to NPR.

This is nowhere near a guaranteed victory for gun violence prevention advocates, though, as The New York Times wrote. First of all, the gun manufacturers aren't going to turn anything over without a fight. And secondly, documents as recriminating as what a look into the tobacco industry revealed might not even exist, if the gun manufacturers were careful. Still, those affected by gun violence aren't ready to give up — and their first victory in the Connecticut Supreme Court could end up being a sign that this particular movement has legs.