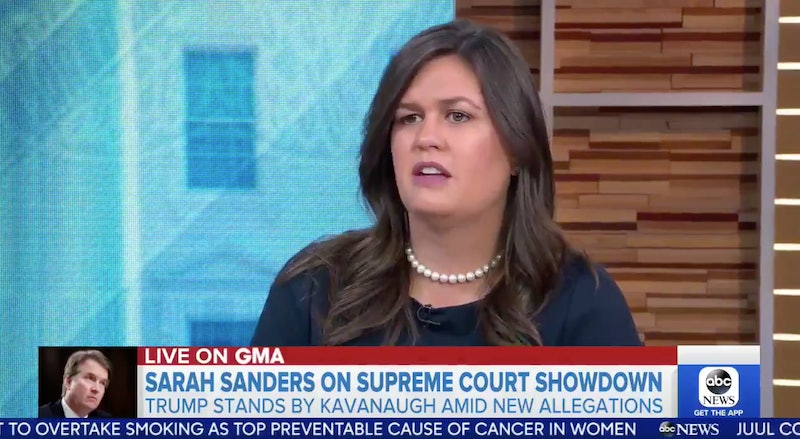 As Judge Brett Kavanaugh is hit with another allegation of sexual misconduct, the White House and President Donald Trump are digging in their heels to support their Supreme Court nominee. Speaking on ABC's Good Morning America on Tuesday morning, Press Secretary Sarah Sanders said to let Kavanaugh's accusers "speak" — but also that Kavanaugh should get to "tell his side of the story."

On Sunday, Deborah Ramirez's allegations against Kavanaugh came out in The New Yorker. She accused him of exposing himself to her while playing drinking games in a Yale dorm during college. Kavanaugh denied the accusation.

On GMA, Sanders told George Stephanopoulos that the White House would "certainly be open" to Ramirez appearing in front of the Senate Judiciary Committee. She suggested that could also take place on Thursday — the same day that Kavanaugh's first accuser, Dr. Christine Blasey Ford, is set to testify. Ford accused Kavanaugh of attempting to sexually assault her at a high school party. He also denied this accusation.

"The president has been clear: Let them speak but let's also let Brett Kavanaugh speak, and let's let him tell his side of the story before we allow allegations to determine his entire future," Sanders told Stephanopoulos.

Stephanopoulos told Sanders that it seems that the president "has already reached a judgment" about Ford and Ramirez's allegations. He listed other men who have been accused of sexual misconduct and said that the president has come out publicly on their sides in each case.

"There does seem to be a pattern here," Stephanopoulos said, naming men such as Roy Moore, Roger Ailes, and Bill O'Reilly (who each denied allegations). "And now, when Brett Kavanaugh is accused, the president consistently, every single time, takes the side of the man."

Sanders then tried to pivot to Democrats who she says should be investigated for sexual misconduct. "A number of other Democrats should have the same type of scrutiny," Sanders said — right after Stephanopoulos pointed out that Sen. Al Franken stepped down following sexual misconduct accusations (some of which he denied, others he never addressed).

Trump has gone after both Ramirez and Ford's allegations, and claimed they are purely political. "The Democrats are working hard to destroy a wonderful man, and a man who has the potential to be one of our greatest Supreme Court Justices ever, with an array of False Accusations the likes of which have never been seen before!" Trump tweeted on Monday night.

Trump has also addressed each allegation individually. He said Monday at the UN that Ramirez's is "totally political." On Twitter, he commented on Ford's:

When Stephanopoulos once again said that Trump had always taken the side of the man in such cases, Sanders disputed it — without an example.

"That's not true," Sanders said. "In this case, the president knows Brett Kavanaugh, he's heard his story, there hasn't been a shred of evidence to corroborate the other individual stories, and there has been a lot of individuals come forward and talked about the Brett Kavanaugh they know, and they're confident these things didn't happen."

It's up to the Senate Judiciary Committee — and Ramirez's lawyers — to decide when or if she will testify.