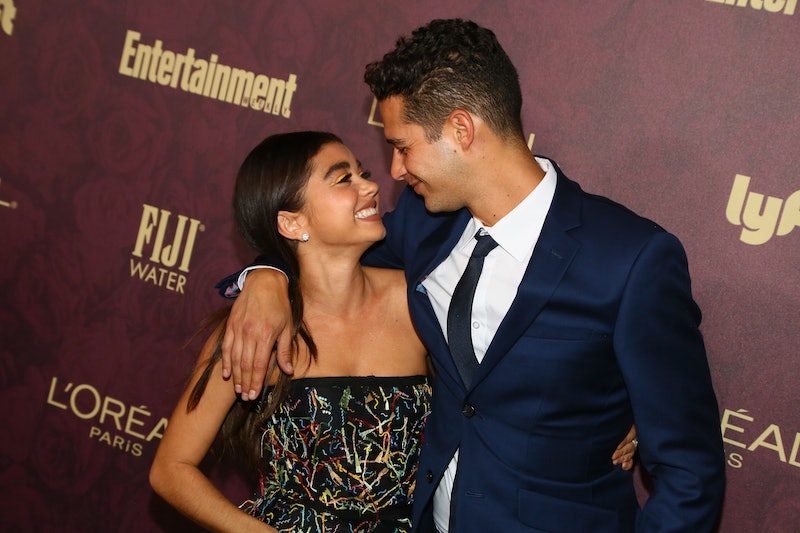 They've moved in together. They've touched on the topic of marriage. They've met each other's families. But as far as Wells Adams and Sarah Hyland’s parents meeting each other goes? That relationship milestone is not quite at the top of their priority list. The Bachelor Nation alum and the Modern Family star's parents have yet to cross paths all because a little thing called political beliefs. Maybe you've heard of it?

On this week’s episode of the Your Favorite Thing with Wells and Brandi podcast, Adams told cohost Brandi Cyrus that he and Hyland have opted to keep their parents apart because of their very different political views. Adams's parents lean right whereas Hyland's parents are liberal, and the couple is not raring to find out what happens when their families end up in the same room. Respectful and productive political discourse is one thing, but watching your parents argue with your significant other's parents over current events at what was supposed to be a polite "getting to know you" meal at the Cheesecake Factory? Not exactly a dream scenario.

“My parents haven’t met Sarah’s parents and for good reason,” Adams said. “They both fall on opposite sides of the political spectrum, and I’m just sure someone’s going to get into a fight about something.”

“They’re getting to hang out one time, and it’s going to be at the wedding, and the directive is no one’s allowed to talk about politics. Good luck, dude. It’s going to be so funny, man. … Hopefully, Sarah and I get married. It would be so great that if someone filmed it and it’s a bunch of liberal actors and then my dad and my family who are a bunch of conservatives. My dad’s a doctor, my brother-in-law is from oil money in Texas. It’s going to be so weird.”

Hyland and Adams began dating in 2017 after they connected over Twitter. About a year after they became a thing, the two started living together. And a proposal sounds like a matter of not if, but when; they aren't engaged yet, but it could be coming down the pipeline soon. In January, Adams told Us Weekly that the Q will be popped "eventually." He said,

“Everyone thinks [Sarah and I are] engaged right now. … We are not engaged, let me just say that. We just moved in together, so I think we’re still kind of, like, feeling each other out, but… it’s gonna happen eventually.”

And uh, it kinda sounds like they've been prepping for the moment for some time. All the way back in March 2018, Hyland revealed to Entertainment Tonight that Adams knows what kind of ring she would want. "He knows what it is, so it’s fine," she said. And when Adams reacted to The Bobby Bones Show's comments about whether or not he will pay for Hyland's ring on a January 2018 episode of My Favorite Thing, he, once again, made it sound like it is not a matter of if, but when: According to People, Adams said, "Can I go on the record right here? I will pay for this ring, I promise you. It will come out of my bank account, okay?”

If, er, when they get married, may Hyland and Adams's parents' views not get in the way of the big day.