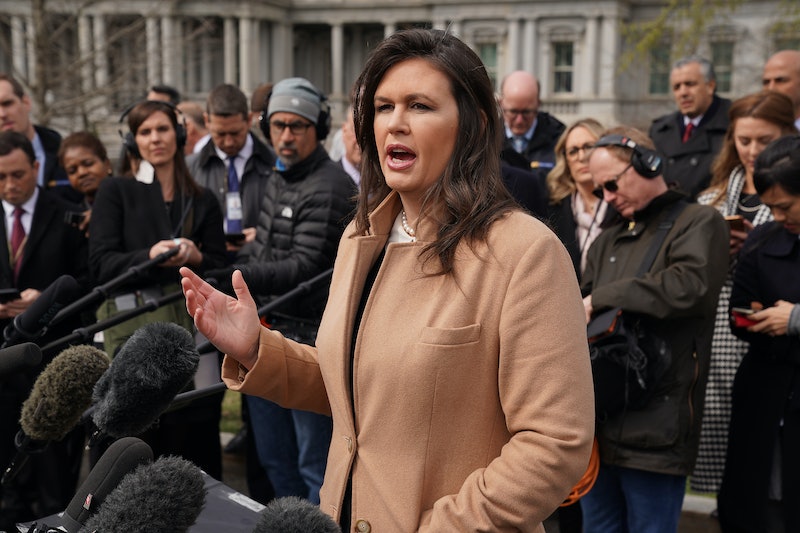 The current press secretary has taken issue with comments made by a White House journalist. In an appearance on Fox & Friends on Monday, Sarah Sanders claimed that April Ryan wants her "decapitated." Sanders pointed to Ryan's claim that the press secretary should be fired for misleading the press about James Comey's firing, as was indicated in the Mueller report.

“I have had reporters say a lot of things about me. They’ve said I should be choked. They’ve said I should deserve a lifetime of harassment,” Sanders said, according to video clips of the Fox & Friend segment that circulated on Twitter. “I certainly never had anybody say I should be decapitated — this takes us to a new low even for the liberal media. I think it just once again proves why this journalist isn’t taken seriously.”

But Ryan didn't say that Sanders "should be decapitated," as the press secretary said during her television appearance on Monday. Ryan used a figure of speech to say that people who lose their credibility should be fired from the Trump administration.

“Not only does she not have credibility, she lied,” Ryan said of Sanders during a CNN segment last Friday, according to video of her remarks. “She should be let go. She should be fired, end of story. When there is a lack of credibility there, you have to start and start lopping the heads off.”

On Monday, Ryan appeared relatively unfazed by Sanders' reaction to her comments. She shared video footage of her CNN appearance to her Twitter account, captioning the video "Here is the full statement on lack of credibility of @PressSec who admitted under oath that she lied!"

During the segment in question, Ryan said that Sanders' untruthful comments about Comey weren't just an issue for the press, but also for Trump's constituents.

"She out and out lied," Ryan said. "The people, the American people can’t trust her. They can’t trust what’s said from the president’s mouthpiece — spokesperson — from the people’s house."

In her Friday remarks, Ryan also said that if the press secretary ever misleads the press, she is compounding the issue of so-called "fake news," a term coined by President Trump. That, Ryan said, could have implications both for the public and for working journalists.

"She says the press is fake when she’s faking reports from the people's house," Ryan said of Sanders. "She’s calling us fake. We’ve had colleagues [who’ve had to] move from their houses because of threats. I had to have security because of being called fake and a loser and all sorts of things from that White House. It’s time for her to go."

The Trump administration has been combative toward the press from the start. The president, in particular, has attacked news outlets — such as The New York Times, The Washington Post, and CNN — regularly since assuming office. In particular, he has, at times, dubbed news media to be "the enemy of the American people," per the Times, and his administration has declined to walk those comments back over the years. Sanders misinterpreting Ryan's comments appears to be reflective of that generally negative relationship.