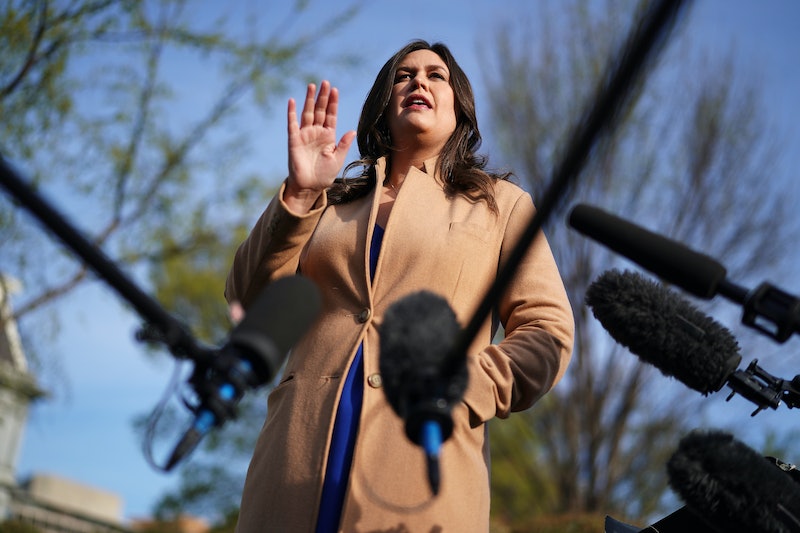 Since its release Thursday, it seems as if everyone has been going over special counsel Robert Mueller's report with a fine tooth comb. One of the more damning findings in the Mueller report is that Press Secretary Sarah Huckabee Sanders had lied when she told the press that "countless" FBI agents had lost confidence in James Comey, implying that they were happy to see him fired by President Donald Trump. As journalists question her credibility, Sanders defended her comment Friday, telling ABC News "it was the heat of the moment."

"It was the heat of the moment, meaning that it wasn't a scripted talking point," Sanders told ABC News' George Stephanopoulos about comments she'd made to the press regarding how FBI agents felt about Comey's dismissal. "I'm sorry that I wasn't a robot like the Democratic Party that went out for two and a half years and stated time and time again that there was definitely Russian collusion between the president and his campaign."

According to CNN, Sanders told reporters during a May 10, 2017 press briefing that President Trump wasn't the only one to have lost confidence in Comey's ability to lead the FBI — "the rest of the FBI" had as well. When questioned by reporters who said FBI agents had told them something different, Sanders claimed the White House had "heard from countless members of the FBI," The Washington Post reported.

But in discussing Sanders' comments to the press, Mueller's report noted that "the evidence does not support those claims" and that "Sanders acknowledged to investigators that her comments were not founded on anything." In fact, according to Mueller's report, Sanders told the special counsel's office that "her reference to hearing from 'countless members of the FBI' was a 'slip of the tongue.'"

"She also recalled that her statement in a separate press interview that rank-and-file FBI agents had lost confidence in Comey was a comment she made 'in the heat of the moment' that was not founded on anything," the report read.

It's worth noting that, shortly after Comey's dismissal in 2017, then-acting FBI Director Andrew McCabe told Congress that "the vast majority of FBI employees enjoyed a deep and positive connection to Director Comey," The Washington Post reported.

In an interview with ABC News on Friday, however, Sanders appeared to be attempting to walk back her comments to the special counsel's office. "Actually, if you look at what I've said, I said the 'slip of the tongue' was in using the word countless," she said. "But there were a number of FBI, both former and current, that agreed with the president's decision. And they've continued to speak out and say that and send notice to the White House of that agreement with the president's decision."

Some journalists tasked with covering the White House have argued that the Muller report's findings puts Sanders' credibility in serious question. "Whatever else you think of the Mueller report, a @presssec admitting she simply made up a justification for firing Comey based on nothing is really bad," The Washington Post's Aaron Blake tweeted. "If she ever holds another briefing, she should be grilled on that."