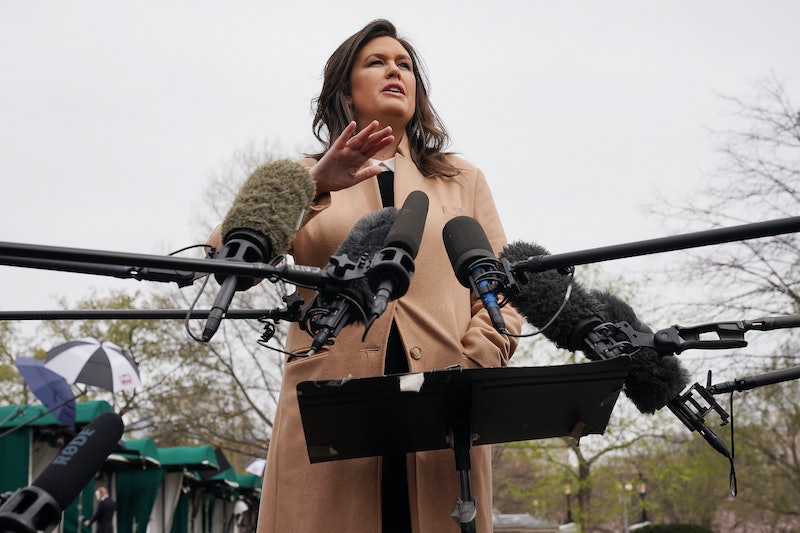 For the first time in 46 days, the White House held a press conference but it wasn't just any presser. On Thursday, Bloomberg reported White House Press Secretary Sarah Sanders' press briefing for kids involved all sorts of questions about President Donald Trump, including what he actually does for a living and what he fancied for ice cream.

The White House press secretary called children over to ask their questions as part of Take Your Sons and Daughters to Work Day. Kids of various journalists and reporters sat in their parents' seats and asked questions about Trump. In one case, a child asked Sanders what kind of ice cream Trump enjoyed. According to Bloomberg, the White House press secretary said that he liked a scoop of vanilla alongside a scoop of chocolate.

Another kid asked Sanders what Trump did for a job. "Whatever he wants," Sanders' son said, per Bloomberg. At one point in the press conference, Vice President Mike Pence joined the crowd. A kid present at the presser asked Pence how many days he and other White House officials got for vacation. "We work with a president," Pence said, "who never stops working." According to Bloomberg, this supposed round-the-clock work life didn't seem to sit well with the child who then responded, "That's weird."

"The reason Sarah Sanders does not go to the 'podium' much anymore is that the press covers her so rudely and inaccurately, in particular certain members of the press," Trump tweeted that month. "I told her not to bother, the word gets out anyway! Most will never cover us fairly and hence, the term, Fake News!"

Yet in spite of frequently dubbing various news media outlets "fake news," Trump has appeared in the spotlight and taken questions at a remarkable rate. Instead of Sanders carrying out press briefings with the media, there are on-the-fly (and "chaotic" as Bloomberg put it) pressers with Trump himself. In October 2018, an ABC News study found that that the president fielded almost 300 questions in the span of 11 days from the press. The news network dubbed it a "media blitz."

While the White House press conference for the children of reporters may have seemed endearing, it looks like reporters still wanted to know when, if at all, the White House would hold a presser for the actual media. In fact, according to Newsweek, Associated Press' White House correspondent Darlene Superville asked Sanders, "Sarah, when will you brief for the real reporters?"

The Associated Press reporter posed the question at the very end of the presser for children. But Karen Travers, ABC News' White House correspondent, noted on Twitter that Sanders did not respond to Superville's question. "No answer from the podium," Travers said.