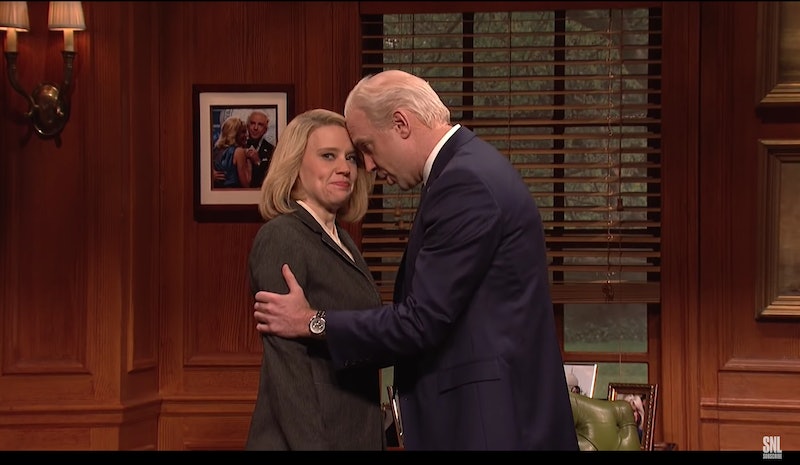 This week's episode of Saturday Night Live poked fun at how Joe Biden interacts with women. The sketch comedy show brought back former Obama-era cast member Jason Sudeikis to reprise his Biden impersonation for a cold open that saw the former vice president and potential 2020 presidential contender working with a sensitivity coach.

Saturday's episode opened with Biden campaign advisors sitting the former vice president down to tell him he needs to change the way he interacts with women if he really wants to make a bid for the White House in 2020. "Look, you guys know that I'm a tactful politician, right," Sudeikis' Biden said. "I'm a hugger, I'm a kisser and I'm a little bit of a sniffer. But the last thing I want to do is offend anyone."

The former vice president is then introduced to a sensitivity coach, played by SNL cast member Kate McKinnon, whom Biden's advisors have brought in to explain how and why some of his behavior crosses the line. When introduced, Sudeikis' Biden rests his forehead and nose against McKinnon's after touching her hair and shoulders.

"One second, I'm just connecting," he tells his advisors when they attempt to intervene. He later defends his touchy nature by claiming he's looking to establish a "human connection."

"Ideally, when you meet a female stranger for the first time, there would be no kisses or hugs of any kind," McKinnon's character said.

Later, when discussing how to properly greet a woman, Sudeikis' Biden suggests a handshake in which he tickles the woman's palm.

"I would suggest no tickling at all," McKinnon's character retorted.

"Really? Even on her birthday?" Sudeikis' Biden asked.

After meeting with two female voters — one of whom punches him in the gut after he cradles her face in his hands — to try out a new "hands-off" approach to greetings and interactions, Sudeikis' Biden is asked if he learned anything. "Oh yeah, yeah, yeah. I mean, not really, no," he said. "The important thing, I think, is that I'm listening. I hear you, and I feel you, I feel you. OK? So, come on. Let's hug it out, America. What do you say? 'Biden and some woman in 2020,' right? We can do this!"

In March, former Nevada state assemblywoman Lucy Flores alleged that Biden had inappropriately touched her shoulders, smelled her hair, and kissed the back of her head during a 2014 Democratic campaign rally in an essay published by New York magazine's website, The Cut. In a statement issued in response to Flores' allegations, Biden said he did not believe he ever acted inappropriately, but vowed to "listen respectfully" to those suggesting he did.

"In many years on the campaign trail and in public life, I have offered countless handshakes, hugs, expressions of affection, support and comfort," Biden said. "And not once — never — did I believe I acted inappropriately. If it is suggested that I did so I will listen respectfully. But it was never my intention."

Since then, however, six other women have come forward to accuse the former vice president of touching them in a way that left them feeling uncomfortable. Biden has since said he feels "badly" about having ever made anyone feel uncomfortable, but has stressed that was never his intention. On Friday, Biden said he was "sorry" that he "didn't understand more" at the time of the interactions about how the women felt, but refused to apologize for any of his specific actions.

"I'm sorry I didn’t understand more," The Hill reported he'd told reporters after speaking at the International Brotherhood of Electrical Workers conference. "I'm not sorry for any of my intentions. I'm not sorry for anything that I have ever done. I have never been disrespectful intentionally to a man or a woman. So that's not the reputation I've had since I was in high school, for God's sake."