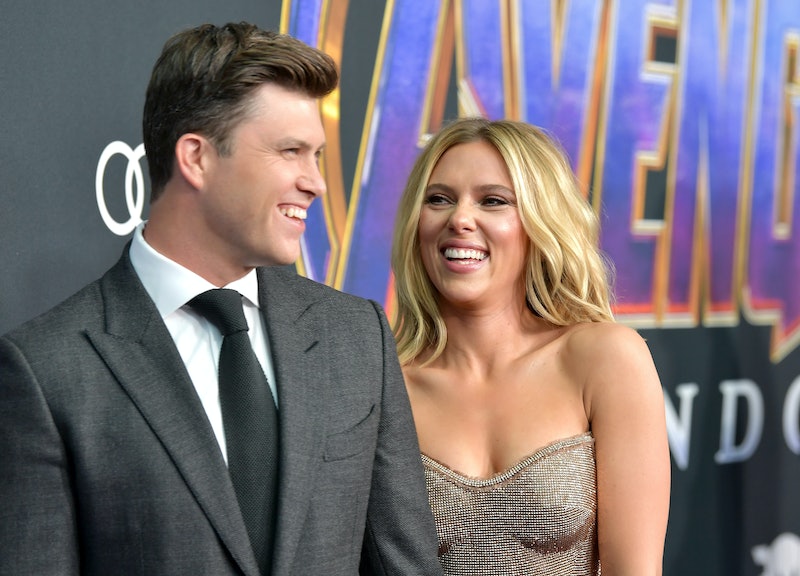 It sounds like a certain celebrity couple had a very exciting weekend. It's official: Scarlett Johansson and Colin Jost are engaged after two years of dating. Johansson's publicist, Marcel Pariseau, confirmed the news to the Associated Press on Sunday, May 19, but so far, there aren't any details about their upcoming nuptials — in fact, Pariseau said they haven't set a date yet.

Given that Johansson and Jost have been a pretty private couple in the time that they've been dating, it's no surprise that there aren't any details of their engagement out there, and there might never be. Johansson isn't on social media, and while Jost is on Twitter and Instagram, he doesn't update too frequently, and so far, he has yet to make any mention of their engagement.

But even though there are no ring photos or a story about how Jost popped the question, it's definitely still exciting to hear that the couple is planning to tie the knot in the future. 2019 has certainly been a big year for these two, especially after Johansson recently starred in Avengers: Endgame as Black Widow — and Jost continues to host "Weekend Update" on Saturday Night Live. Deciding to spend the rest of their lives together is just the icing on the cake.

Although rumors that Johansson and Jost were dating didn't ramp up until May 2017, they actually met for the first time years before they were romantically involved. They first crossed paths in 2006, when Johansson hosted SNL, and in September 2017, Jost opened up about that first meeting to Entertainment Tonight.

"The first time she hosted was the first year I was a writer on the show," the comedian said at the time. "So, we've kind of known each other since then... she's the best."

He also took the opportunity to shower Johansson with compliments. "She's wonderful," Jost said. She's working, so otherwise, she'd be here. She's pretty cool... It's hard to have a lot of complaints, she's pretty awesome."

It wasn't until April 2018 that Jost and Johansson made their red carpet debut together at the premiere of Avengers: Infinity War, where they posed for photos and generally looked super in love. And since then, it doesn't seem like much has changed.

Reports that Johansson and Jost might be considering engagement began to surface earlier this year. In February, Us Weekly reported that they had moved in together, with an insider claiming that Jost is "head over heels" and the feeling is mutual.

“Scarlett loves Colin too, and they are in it for the long haul,” the source said. “They have talked about marriage and are fully committed to each other. Colin gets a starry-eyed look in his eyes when he talks about her.”

Sounds like all that commitment talk actually led somewhere, and soon, they'll be planning a wedding.

Congratulations to this happy couple. Fingers crossed that they'll share the details of their engagement soon — and maybe even a ring photo? Fans can dream.