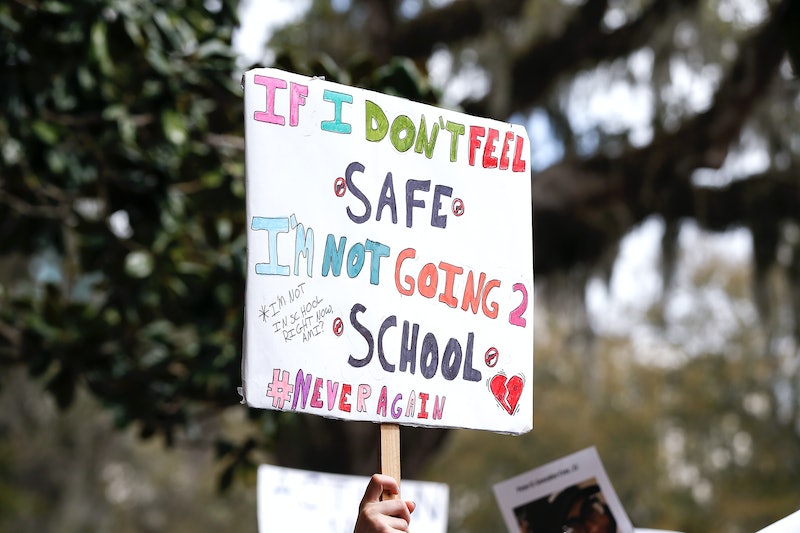 The rising tide of gun violence at educational institutions across the United States has led to schools instituting different security measures, all with the aim of protecting students. These include, but are not limited to, identification badges for employees, monitored or locked doors, and even occasionally metal detectors. According to a new study from the University of Toledo and Ball State University, though, these added security measures don't protect schools from gun violence — and they may even be lulling people into a false sense of security.

"Hundreds of millions of dollars have been spent to harden schools," the study's abstract reads, with "hardening" referring to the common practice of adding security practices like the ones listed above. "None of the currently employed school firearm violence prevention methods have empirical evidence to show that they actually diminish firearm violence in schools."

This research backs up evidence that's pretty clear to anyone who graduated from high school in the last 15 years or so. Even as security at schools gets tighter, incidents of gun violence have increased. According to a database compiled by the Naval Postgraduate School, 2018 saw the most ever incidents of gun violence at schools in the United States, and this resulted in 35 deaths and 79 injuries, as Education Week found.

The security measures aren't minimal, either. As The Washington Post wrote, as of the 2015-16 school year, 94% of public schools monitored their doors, and 92% had written plans in place for the event of an "active shooter." Additionally, 67% had classrooms that locked from the inside, and 11% even used metal detectors.

There's also that other frequent suggestion from politicians and others in the wake of mass school shootings: the idea of arming teachers. Fourteen states already have programs in place to arm teachers, according to the BBC. But as the study detailed, arming teachers is also not likely to actually protect students. It used an example of a shooter at a high school in Kentucky, who walked in, immediately began firing, and ended up killing two students and injuring 11 within just 10 seconds.

"Armed school personnel would have needed to be in the exact same spot in the school as the shooter to significantly reduce this level of trauma," the study said, per The Washington Post. "Ten seconds is too fast to stop a school shooter with a semiautomatic firearm when the armed school guard is in another place in the school."

The study then came to a troubling conclusion about the added security measures at schools. They're clearly not making students and employees any safer, but they could be lulling students, parents, and school officials into thinking that the school is safer than it really is.

"A false sense of security is a dangerous environment that is currently being propelled by mass media, interest groups, and policymakers," the study concluded.

The study found precisely one thing that would definitely limit gun violence in schools: limiting young people's access to guns, as The Washington Post explained. Firearms are the leading cause of death among people younger than 24, according to the Giffords Law Center. While the study's authors also wrote that more research is necessary into what schools can do to reduce gun violence, it seems that advocating for laws promoting gun violence prevention is a good place to start.