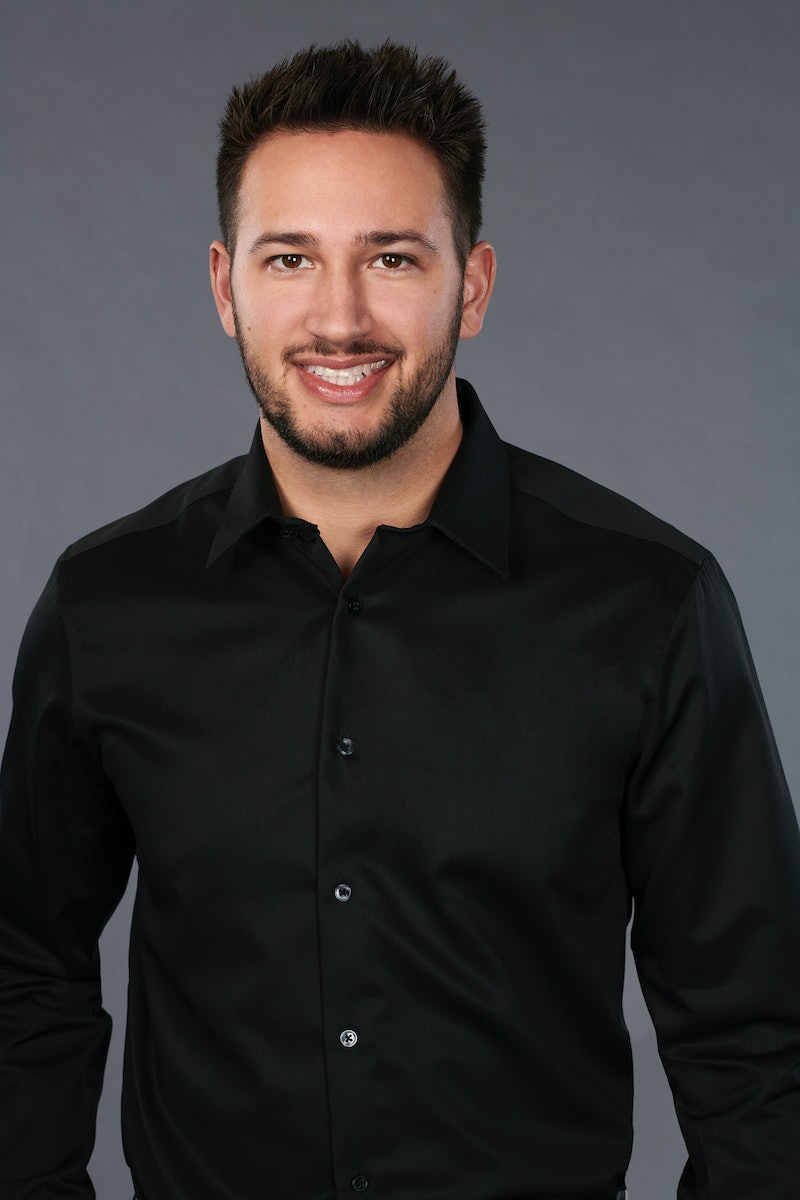 Hannah B.'s season of The Bachelorette hasn't even premiered yet, and there are already rumors that one contestant isn't there for the right reasons. Or at the very least, that he's not being honest about certain aspects of his life back home. There's not a lot of information out there about Scott from The Bachelorette, but based on promos, he's going to be in hot water with Hannah at some point.

First things first — according to his ABC bio, Scott is a 28-year-old software sales exec from Chicago. His hobbies include day drinking and watching sports. He also loves Kris Jenner, says he's a catch because he's got a grown-up job and great friends and family, and is very skilled at "schmoozing waitresses into giving him free food and drinks." You're an executive, Scott! You can pay for drinks!

Now for the drama. As revealed by a teaser published by People, at some point this season, Hannah accuses Scott of having a girlfriend, and he looks shocked. Is he taken aback because it's not true, or because he's been found out? We won't know until it airs, but good lord! Hannah's already done the whole "date someone who's also dating other people" thing, and now it's her turn to be the one with multiple love interests, damn it.

There's also a photo on ABC's site, found above, of Hannah and Scott. She doesn't look thrilled with him, and appears to be standing in the doorway of the mansion. Is she saying goodbye? Is there a premature elimination before we even get to the first rose ceremony? Hannah deserves better than a dude with a girlfriend.

As far as anyone's been able to find so far, Scott doesn't have any public social media. While that's not necessarily odd for Bachelor and Bachelorette contestants looking to avoid controversy and hide potential spoilers, it doesn't bode well for Scott. Did he have an Instagram he had to delete because it's full of photos with another girlfriend?!

Of course, we don't really know Scott just yet, or what's really happening in this situation. Bachelorette producers are known to be tricky with editing, even in promos, so this might be a huge misunderstanding. For both Hannah's and Scott's sakes, hopefully this is just a nasty rumor that's been blown out of proportion.

As Jordyn Taylor pointed out in Men's Health, though, this wouldn't be the first time a man came on the show with a girlfriend. Remember Rachel's incident with DeMario, or Ali's bizarre confrontation with Justin? Don't go on national television and try to date someone if you're already in a relationship, people. It's bananas that it needs to be said at all.

Other than the rumors, there's unfortunately not much more to say about Scott. His lack of a social media presence makes it hard to learn anything else about him. Fingers crossed that when the show actually airs, we'll learn that Scott is single. If not, we'll ready our popcorn while Hannah rightfully sends him back home.