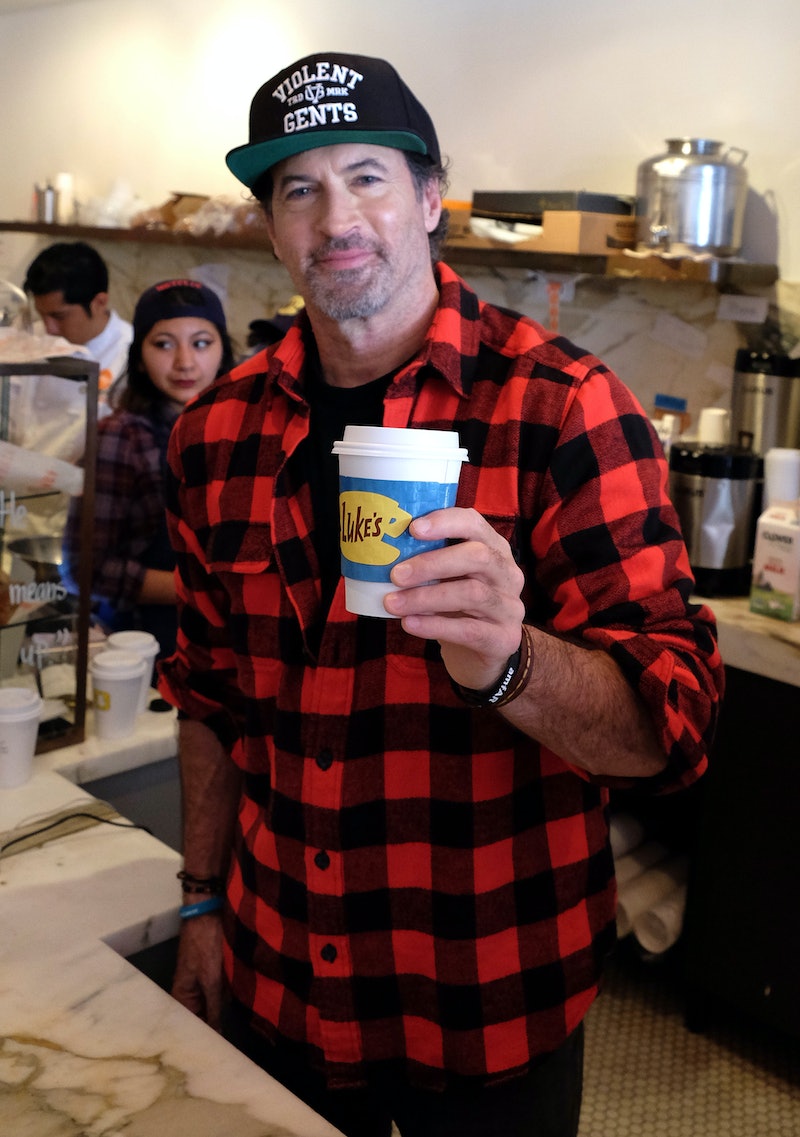 Although a sequel to Netflix's revival, Gilmore Girls: A Year In The Life, is still uncertain and dreams of endless adventures with the Gilmore women (on screen) might not come to fruition, that's no reason to believe that it all has to end there, right? Many fans have longed to have a lovestruck Luke Danes make them their coffee every morning, and now that reality could be a bit closer. Gilmore Girls actor Scott Patterson now has his own brand of coffee, though, sadly, he's probably not going to dress up like Luke Danes to serve it to you. However, it's clear that his love of the show has followed him throughout most of his post-GG life, and fans don't mind one bit.

Gilmore Girls remains the actor's biggest and most memorable role to date, so it makes sense that he'd pay tribute to it every now and then. And it looks like Patterson's life is mirroring Luke's in at least this aspect. In an interview with Wealth Management, Patterson spoke about his success on the show, and, when asked about future endeavors, said,

"I'm developing my own coffee brand. We're almost ready to launch, but we want to have our ducks in a row before we come out with it. Quality coffee is something that I am obsessed with. It's the thing I look forward to every morning and throughout the day and throughout the evening and now throughout the middle of the night. It's going to be called Scotty P's Big Mug Coffee."

Could it be the Patterson is now as obsessed with coffee as Lorelai and Rory? It sure sounds like it.

It would have been even more fan-friendly if he named the coffee with a GG theme of some sort, but it's cool that at least he put his own personal touch to something that will inevitably be connected to the show forever. Let's face it: Gilmore Girls is a show that revolved, literally, around a coffeeshop. Since the show ended, it's remained a big part of Patterson's life, so this coffee brand isn't exactly a very surprising move.

Last year, Patterson shocked fans when he was serving coffee on Luke's Diner Day on October 5, 2016, in anticipation of the revival on Netflix. He even rocked his typical Luke gear with the same Luke's Diner cups.

On top of that, in early 2017, Patterson announced on his music site, SmithRadio that he would be heading out on an acoustic coffee house tour, spanning from California to NYC and stop in between. For the die-hard fans, he has a contest going on to have a meet and greet and a coffee break with Patterson, which is kind of a genius move on his part.

There's no news yet on when the coffee will be on sale, but the best way for any GG fan to celebrate this news is to brew a nice cup of coffee and re-watch the series... again.

More like this
This 'Gossip Girl' Wardrobe Error Has Gone Viral On TikTok
By Alyssa Lapid
All The ’70s Easter Eggs You Missed In 'That ’90s Show'
By Grace Wehniainen
'Abbott Elementary' Fans Probably Missed This 'Parent Trap' Easter Egg
By Sam Ramsden
'Brookside' Is Coming Back & Soap Opera Fans Are Going Wild
By Sam Ramsden
Get Even More From Bustle — Sign Up For The Newsletter
From hair trends to relationship advice, our daily newsletter has everything you need to sound like a person who’s on TikTok, even if you aren’t.