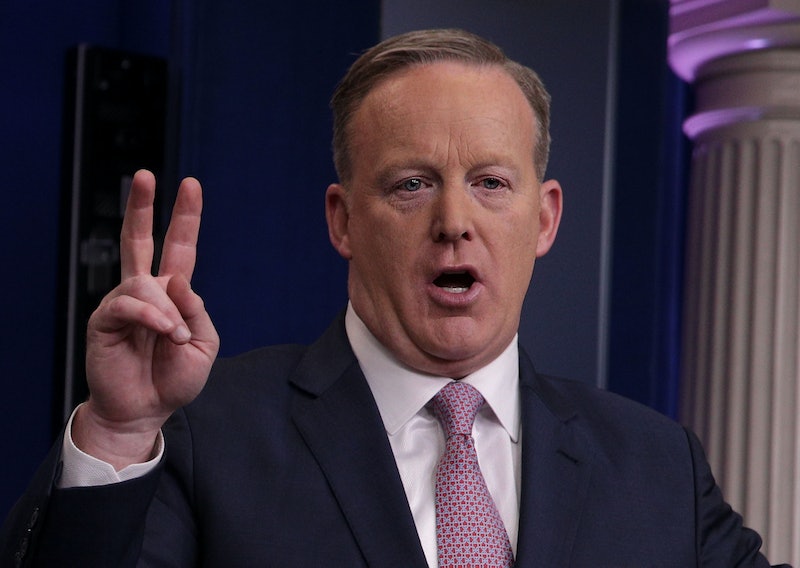 White House Press Secretary Sean Spicer might soon want to call a truce with the ice cream company Dippin' Dots. After it was reported that Spicer had tweeted some not-so-nice things at the company over the years, saying of all things that it was not the ice cream of the future (as the company's slogan goes), the company decided to respond. Perhaps it was out of fear that @POTUS might start dissing their flash frozen pebble ice cream next, but whatever the reason, Spicer's Dippin' Dots feud is back and the whole thing is hilarious.

The old tweets that jab the company were first reported by A.V. Club as a bit of tongue-in-cheek coverage of Spicer's first press briefing on Saturday, when he pressed some alternative facts about the size of the inauguration crowd and refused to take questions. A.V Club had just one question about Spicer's controversial run-in with the nation's journalists: "Could he get through an entire five minute speech to the press without slipping in an attack on his arch-enemy Dippin’ Dots, The Ice Cream Of The Future?"

Of course, the answer was yes, but after the article went viral, Spicer probably wished he'd preempted the whole controversy by making a statement from the podium. The press secretary had tweeted once in 2010 and again in 2011 attacking the company's futuristic claims. Then later in 2011, he attacked the company for his now boss's favorite move, filing for bankruptcy, linking to a Wall Street Journal article on the matter.

So then cue Dippin' Dots. They decided to post an open letter from their CEO Scott Fischer to Spicer on their website. "We’ve seen your tweets and would like to be friends rather than foes. After all, we believe in connecting the dots," Fischer writes before going on to point out that the ice cream is made in Kentucky. He also says they're on the jobs and opportunities bandwagon like Trump says he is. "We can even afford to treat the White House and press corps to an ice cream social," Fischer offers. "What do you say?"

Whether or not the White House takes them up on that offer, the ice cream company has already won the publicity contest. Their PR firm came up with the letter as a communications strategy to bring attention to the brand — and boy did it work. The response has been covered by everyone from The New York Times and CNN to NPR and Forbes.

The real lingering question, then, is whether Spicer likes the frozen treat? He once tweeted that they were out of vanilla at a Nationals game. That doesn't sound like the complaint of a hater of the brand, but rather a disappointed fan. Dippin' Dots has that covered, too. "Running out of your favorite flavor can feel like a national emergency!" Spicer acknowledged in the letter before ensuring that they'll have "plenty of all your favorite flavors" at the press corps ice cream social.

Even if the ice cream's not "of the future," the company sure does think ahead for their marketing campaigns.

More like this
On TikTok, Tinned Fish Date Night Is The Latest Viral Food Obsession
By Emma Carey
Here’s Everything You Need To Know About Operation London Bridge
By Bustle UK
How To Watch The Queen's Funeral
By Bustle UK
These 2 Women Could Be America’s First Lesbian Governors
By Tess Garcia
Get Even More From Bustle — Sign Up For The Newsletter