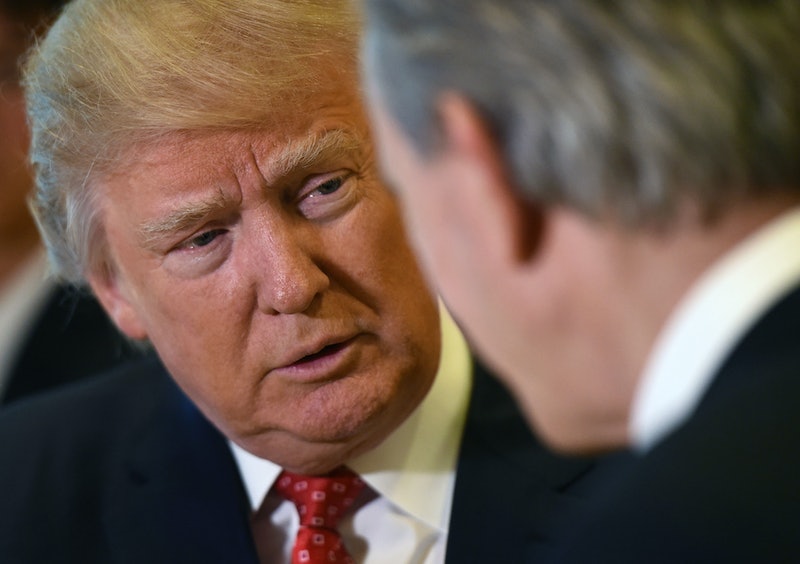 It may come as a shock to many that Donald Trump has gone a full 167 days without holding a press conference. Part of the surprise stems from the fact that many critics on the right called out Secretary Clinton during the primary and general election for holding few press conferences. Chief amongst those critics was Trump himself. At any rate, Trump broke his press conference avoidance today, taking questions on a range of topics pertaining to his upcoming inauguration. And following the latest breaking news, certain topics immediately took off.

Sean Spicer, Trump's press secretary, immediately called the BuzzFeed report "frankly outrageous" and "flat-out false." Mike Pence followed up by criticizing the press for what he called "irresponsible" journalism, apparently in response to the publishing of unverified leaked documents. He then introduced President-elect Trump.

Trump opened by referencing his numerous press conferences in the past, and then suggested that the "intelligence agencies" may have been behind the leaked BuzzFeed report. He complimented many news agencies without naming any specifically, saying they were "so professional," apparently for refusing to publish the aforementioned dossier.

Trump moved on to highlight Ford's decision to keep jobs in the United States, saying that drug companies needed to be next. "Pharma has a lot of lobbies, a lot of lobbyists, a lot of power." Trump criticized the lack of a proper bidding process.

Trump immediately moved on, saying he's been working with generals in getting the Boeing contract costs down. He seemed to take sole credit for keeping multiple industries in the country. "I will be the greatest jobs producer that God ever created," he repeated.

Talking about Inauguration Day, Trump called his supporters "a movement," and promised an "elegant" event on Jan. 20.

Trump also announced David Shulkin as the next head of Veterans Affairs (VA). He said they will team up with the Cleveland Clinic, as well as the Mayo Institute, to improve healthcare for American veterans.

The first question came on whether or not Trump had been provided with a two-page summary of the leaked BuzzFeed report. Trump called those who put the report together "sick people." Trump then admitted he thought the hack of the DNC was done by the Russians, but that we're hacked by other entities as well. "We have much hacking going on," he said, after referencing previous government cyberattacks.

"I respected the fact that he said that," Trump followed up, commenting on Russia's denial that they have any blackmail on Trump. "Look at the things that were hacked, look at what was learned from that hacking, that Hillary Clinton got the questions to the debate and didn't report it."

"If Putin likes Donald Trump, I consider that an asset, not a liability," Trump said. He then suggested that if he didn't get along with Putin, he'd be tougher on the Russian president than Hillary Clinton would have been.

Trump disputed the leaked documents, saying he warned his people there were cameras everywhere, and to "be careful" when they traveled. This appeared to be in reference to the allegations that sex workers were hired to perform "golden showers" at his hotel room in Moscow.

Trump reiterated that he has "no deals" with Russia, and is not susceptible to that kind of blackmail by them. Trump then brought up an unrelated offer of $2 billion for a "deal in Dubai," which he said he turned down because of the presidential office. He said he legally could stay in control of his business, even while being POTUS. But he said he does not want to do that.

Trump was also asked about whether or not he will release his tax returns. Trump once again refused, using the excuse that his taxes are under audit. He suggested that reporters were the only ones who cared about the issue of his taxes.

Next to Trump sat a table stacked with dozens of folders representing documents signed by him in relation to his business holdings. Trump reported that his two sons will take over his business, and will not discuss their dealings with him.

Sheri Dillon, Trump's attorney, specified how Trump will dislodge himself from his business holdings before taking the presidential oath of office. On top of Trump turning over his business to his two sons, there will be an "ethics advisor" to help navigate any potential conflicts of interest arising during his term in office.

Dillon also announced that Ivanka Trump will no longer have any association or official capacity with the Trump Organization. There will also be "severe restrictions" on any Trump Organization new deals during Trump's tenure as president, with an apparent full stop on any international deals at all.

Dillon closed by addressing the "Emoluments Clause," which prevents presidents from accepting any type of gift or title from foreign entities. Dillon disputed that such actions as "paying for hotel rooms" are wholly unrelated to Trump in his role as president. But to avoid any appearance of conflicts of interest, Dillon announced that Trump will donate any proceeds from hotel rooms paid for by foreign governments to the Treasury.

"The American people were well aware" of Trump's businesses before voting for him, said Dillon. She herself did not take any questions, but handed the microphone back to Trump after her lengthy detail of Trump's transfer of business holdings.

Trump then described Secretary of State nominee Rex Tillerson's Senate testimony as "brilliant," brushing off the reporter's question about multiple conflicts of interest within Trump's administration as a whole. "In the case of Rex, he ran incredibly Exxon Mobil," said Trump. "I want to bring the greatest people into government."

"You're gonna be very, very proud ... of what we put forth having to do with healthcare," Trump responded to a reporter question on Obamacare. He called the president's signature domestic achievement a "disaster."

"It will be repeal and replace. It will be essentially simultaneous."