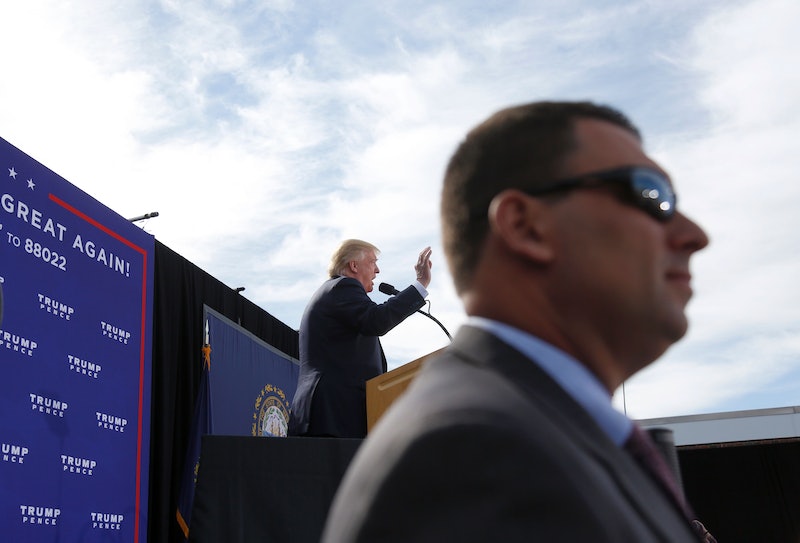 Get ready for a President Trump — come Jan. 20, the Donald's role as commander-in-chief will be made official at the inauguration ceremony. Considering the fact he led one of the most offensive presidential campaigns in modern memory and lost the popular vote by nearly 3 million (according to the non-partisan Cook Political Report), there are some concerns about protests, demonstrations, and other potential security threats at Trump's big day. So what will security at the 2017 inauguration be like?

It's not unusual for presidential inaugurations to face some backlash, and there's been heightened security at the inaugurations of both President Obama and President Bush. In fact, extra precautions were taken with Obama's first inauguration ceremony in 2009 because it was the first transition of power since the September 11th attacks. Not one but two major threats came to light, according to John Miller, a former assistant director of national intelligence, who spoke to CBS This Morning about the 2009 inauguration: "One was a major credible threat from al Qaeda that a group from Somalia was going to attack the inauguration ... the other had to do with a guy coming down from Boston with a suicide vest, and both of those ended up washing out. But they certainly brought up the tension level."

Even so, according to the New York Times, some senior security officials are saying this year will be even more challenging. Senator Roy Blunt of Missouri, who is chairman of the Joint Congressional Committee on Inauguration Ceremonies, said

What the intelligence community says publicly is what they say privately, and that is more threats from more directions than ever before ... and that just means the Capitol Police and the security elements need to be more thoughtful and alert than ever to what could happen.

This year the inauguration security planning committee is bracing the most for protesters. Anyone who wants to protest has to apply and be approved for a permit. At the time of writing, there are up to 23 groups with applications. The biggest group to get approval as of now, with an expected 200,000 people showing up to protest the day after the inauguration, is the Women's March on Washington. According to its website, the march intends to "send a message to all levels of government that we stand together in solidarity and we expect elected leaders to act to protect the rights of women, their families and their communities."

The need for tighter security and heightened sense of alert isn't limited to the inauguration ceremony, though. Trump Tower in New York was recently evacuated over concerns regarding a suspicious package. It proved to be completely innocuous, but with good reason, the approach is better safe than sorry.