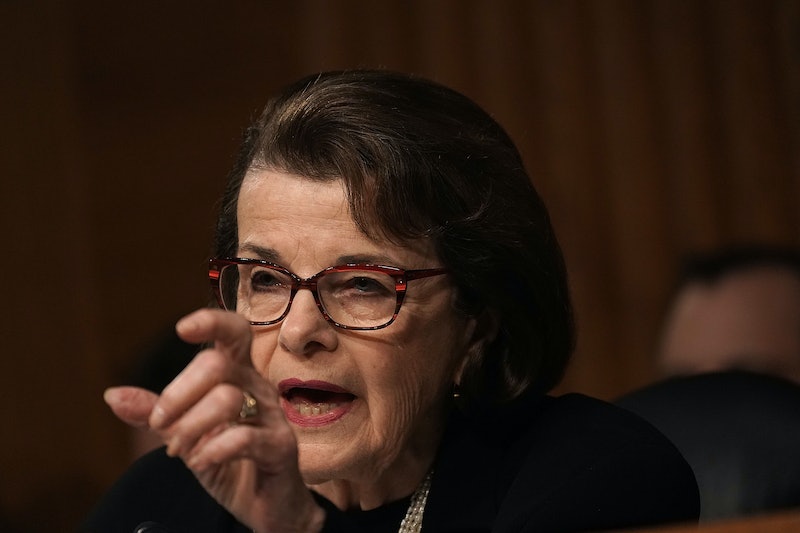 The staff for the ranking Democrat on the Senate Judiciary Committee has been receiving "threats of bodily and sexual harm," according to a report by McClatchy D.C. on Thursday. California Sen. Dianne Dianne Feinstein's staff reportedly received harmful threats after the senator revealed she obtained a letter that later was revealed as one in which a woman accused SCOTUS nominee Brett Kavanaugh of sexual assault. Kavanaugh has categorically denied the allegation through the White House.

In a Sept. 16 interview with The Washington Post, the accuser came forward as Palo Alto University professor Christine Blasey Ford. In the interview with The Post, Ford said she wrote a letter to Feinstein in July, seeking anonymity at the time. She said she detailed an alleged incident in which Kavanaugh drunkenly held her down and attempted to take off her clothes at a party in Maryland decades ago. In September, almost a week before the Senate Judiciary Committee would vote on Kavanaugh's confirmation, Feinstein addressed the letter without revealing its contents or Ford's identity.

"I have received information from an individual concerning the nomination of Brett Kavanaugh to the Supreme Court," the senator said in a statement. "That individual strongly requested confidentiality, declined to come forward or press the matter further, and I have honored that decision. I have, however, referred the matter to federal investigative authorities."

A spokesman for Feinstein's office told McClatchy, "Since the allegations about sexual assault became public, we’ve been getting a significant number of calls and emails, mostly from other parts of the country, that have been disrespectful and ugly."

"Calls have included threats of bodily and sexual harm against staff," he added. "Emails have come in with threats and highly offensive insults to specific staff members by name."

Tom Mentzer, one of Feinstein's staffers, tells Bustle: "We’re receiving a lot of calls and emails and some of them are nasty."

It isn't just the Democratic senator whose staff has reportedly received threats. According to a report by The New York Times, Maine Republican Sen. Susan Collins has been on the receiving end of threats over her potential vote on Kavanaugh, even before Ford's interview in The Post was published. The Times reporters said that Collins' staff had received a "barrage of calls" that were, in some cases, laden with expletives.

A spokesperson for the Republican's office, Annie Clark, told The Times that Collins' staff received one letter and "multiple" voice messages, including one call where a caller wished rape on a female staff member.

Pressure on Collins reportedly grew after she met with Kavanaugh in August. She called the encounter "excellent" and that Kavanaugh "agreed with what Justice John Roberts said at his nomination hearing" referring to Roberts' stance that Roe v. Wade was "settled law." According to Collins, the 1973 landmark decision that effectively legalized abortion for women was out of the danger of being overturned by Kavanaugh.

In an interview with WVOM, Collins briefly spoke about the reported threats. "My office has received some pretty ugly voicemails, threats, terrible things said to my staff," the senator said.

While some of the calls made to Feinstein's office have reportedly been profane and vulgar, the majority of remaining calls have focused on opposing Kavanaugh's nomination, according to the spokesman.

As both senators' offices grapple with threats via mail and calls, Ford has also been subjected to "vicious harassment and even death threats," according to her attorneys. In a letter addressing the Senate Judiciary Committee's chairman Chuck Grassley, the professor's attorneys said, "As a result of these kinds of threats, [Ford's] family was forced to relocate out of their home."