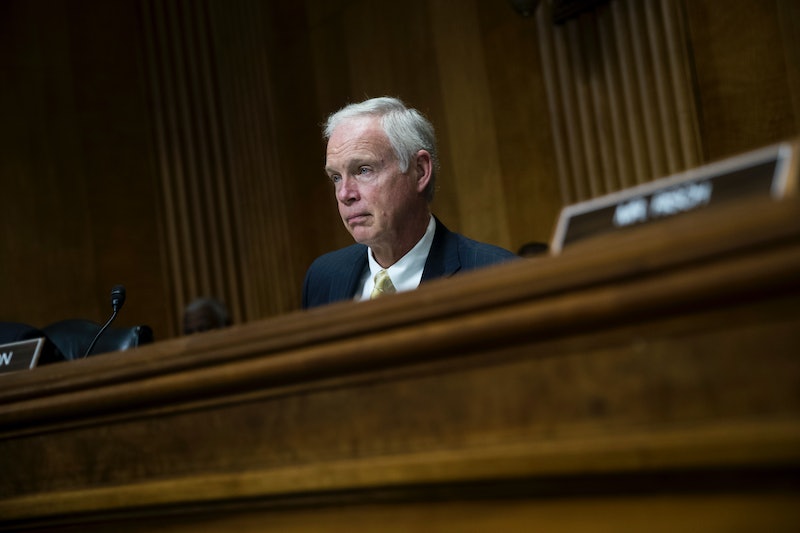 Now that the Senate Judiciary Committee has advanced Judge Brett Kavanaugh to the full Senate, more legislators are being asked for their opinion on the allegations made against the president's SOCUTS nominee — all of which Kavanaugh denies. One Republican senator from Wisconsin was asked just that over the weekend, and came back with his own version of what happened. Sen. Ron Johnson said Dr. Christine Blasey Ford could have "false memories" of the alleged assault, but science doesn't support his theory.

Bustle has reached out to the White House for additional comment from Kavanaugh and to Ford through her attorneys.

Outside Mitchell International Airport in Milwaukee on Friday, reporters asked Johnson why he thought Ford testified. "Read about false memories. Read about people who have actually confessed to crimes and then later proven totally innocent, OK?" he responded.

Asked again about whether he thought she had false memories, the Republican senator from Wisconsin said, "There are a number of explanations for it. That would be one of them. Again, regardless of exactly — nobody knows what happened 36 years ago."

As noted by Ford herself in her Senate Judiciary Committee testimony, victims of sexual assault are actually more likely to remember the trauma that they experience thanks to the chemical makeup of the brain and how it responds to such situations. Dr. Richard Friedman, a psychiatrist, wrote a New York Times op-ed explaining how norepinephrine, a chemical present when someone feels intense emotions, helps code events like sexual assault into the brain.

Phillip Zoladz, an associate professor of psychology at Ohio Northern University, who specializes in emotional memory creation, also wrote extensively on the topic for NBC News. "When we encounter a stressful situation, chemicals such as cortisol and norepinephrine are released to focus our attention on the stress-related information and store it in a very powerful way," Zoladz wrote. "The brain is basically saying, 'This is important; remember it because it could later save your life.'"

The film of Johnson was captured by a Milwaukee filmmaker Joel Van Haren. He asked Johnson several times why he will vote for Kavanaugh.

"I met the man. He’s a good, decent person," Johnson told Van Haren. "Democrats destroyed his life, you know? An incredibly unjust process. A bedrock principle of our system of justice is a presumption of innocence."

He also mentioned the other people who Ford said were at the party but who don't remember the incident. "What are you supposed to do? Presume he’s guilty?" Johnson asked. "My job is to evaluate this nominee ... My evaluation is I’m going to vote to confirm. It’s that simple."

On Thursday, about 30 women protested outside the federal courthouse in downtown Milwaukee and delivered a letter to Johnson asking him to vote no on Kavanaugh's confirmation. The protest was a local action of the Women's March.

Janet Slater, a spokesperson for the event told the Milwaukee Journal Sentinel what the letter contains. "The letter asks the senator to call for a halt to the proceedings, ask for an FBI investigation into the accusations and, based on the testimony we've heard so far, to reconsider whether Brett Kavanaugh is qualified to be a Supreme Court justice," Slater told the paper.

"Will you recall John McCain’s words and actions, and put country ahead of party?" the letter continues. "We’ll be watching."

Their answer came sooner than expected.