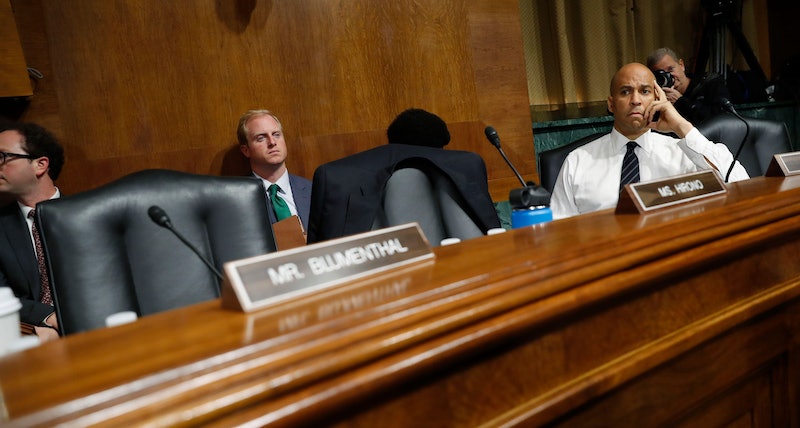 A meeting on Brett Kavanaugh's nomination has been held despite calls for a delay, but many members of the Senate Judiciary Committee still put up a fight. On Friday morning, several Senate Democrats walked out of the Kavanaugh committee meeting and refused to participate in a scheduling vote in protest.

In typical Senate bureaucratic fashion, an extended series of votes must take place before Kavanaugh's final confirmation vote occurs with the full Senate. The chamber's Judiciary Committee will first hold a preliminary vote, but before that, there's also a vote to schedule that vote. That's what was supposed to happen at 9:30 ET on Friday morning when Democratic senators held their protest.

It began with Sen. Amy Klobuchar from Minnesota and Sen. Mazie Hirono from Hawaii, who verbally expressed their opposition to the process when they were asked for their vote. "I strongly object!" Hirono declared. "What a railroad job! No, no, NO!"

New Jersey Sen. Cory Booker and California Sen. Kamala Harris refused to participate at all. They remained silent when their names were called; a Bloomberg video of the moment captures a voice explaining, "They're not answering because this is so unfair, Mr. Chairman." Both looked ahead, stone-faced, while the committee waited several seconds for them to respond.

Then four of the senators walked out. Harris and Hirono, as well as Sen. Richard Blumenthal and Sen. Sheldon Whitehouse, stood up and walked out of the room while Republican Chairman Chuck Grassley was speaking. He announced that the committee's vote on Kavanaugh was scheduled for 1:30 p.m. ET and then began a statement about Thursday's testimony from Kavanaugh and Dr. Christine Blasey Ford.

"Yesterday's hearing was not a trial, but trials have rules based on common sense notions of fairness and due process, not the other way around," Grassley began, as the senators started to get up and leave. "A person had allegations made against him in a public way and his reputation and livelihood were at stake. It was only fair that his accuser had the burden of proof. In my opinion, this wasn't met."

Distracted by the disruption, Grassley paused to lash out at photographers who were standing up to capture the senators who were exiting: "Maybe you just ought to leave the room if you don't know what the rules are!"

The protesting senators spoke to reporters after the meeting. Harris said that the confirmation process "should not be about raw power influencing the outcome of a decision that is about not only a statement of what we hold as being precious and important in our system of justice, but who will sit for a lifetime on the Supreme Court."

She continued, "This has been about raw power. You're seeing that on display in the hearing this morning; you're seeing that in the process from the beginning. … This is a failure of this body to do what it has always said it is about, which is be deliberative."

Hirono told reporters that the mutual exit had not been planned. "We did not coordinate walking out," she said, and pointed to her chest: "We feel this in here."

The Senate Judiciary Committee's initial vote on Kavanaugh will take place at 1:30 p.m. ET on Friday. After that, the full Senate will begin debating his confirmation before a final vote. USA Today reports that that vote could happen as early as Tuesday.