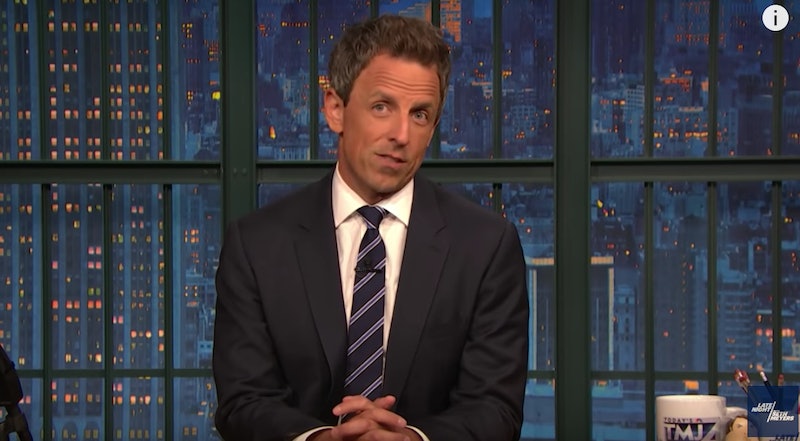 Seth Meyers wants to be real with you for a second about trash talk. Specifically, anonymous trash talk about our president. On his show, Late Night with Seth Meyers, the host called out folks inside President Donald Trump’s White House who are anonymously disparaging him. After a Trump administration insider dished on the president in an op-ed for The New York Times anonymously, Meyers went for blood (and laughs).

In his show’s popular bit, “A Closer Look,” on Thursday night, Meyers pointed out that these anonymous aides shouldn’t get to have their cake and eat it too — they shouldn’t get to work for the president and then act like martyrs undercutting him from within. As he put it, they shouldn’t get to “cast themselves as heroic saviors protecting the republic from the whims of a madman.”

The clip Meyers clip was in response to news that an unidentified top official within White House wrote an op-ed for The New York Times that slammed the president and claimed in its title "I Am Part of the Resistance Inside the Trump Administration." The anonymous official basically framed themselves as a vigilante within the government working to "thwart parts of his agenda and his worst inclinations." The op-ed created considerable backlash, with many top officials stating their allegiance to the president thereafter.

Separately, sources from within the White House also said some shattering things — many anonymously — to Pulitzer Prize-wining journalist Bob Woodward for his new tell-all book, Fear: Trump in the White House, which will be published on Sept. 11 — although pieces of it have been reported on this week. Basically, the leaks are getting out of control, and Trump isn't here for it.

But, then again, neither is Meyers.

"It’s easy to talk tough, but unless you’re actually willing to resign and tell the American people everything you know, then your tough talk is worthless,” Meyers said.

"In the book even his own aides describe Trump as an 'unhinged idiot' and 'professional liar' who acted like —and had the understanding of — ‘a fifth or sixth-grader,'" Meyers said, before quipping. “Of course, you don’t need a book to know that. You just need eyeballs and ear holes.”

Meyers also took on stories in Woodward’s book about Trump aides who’ve been “loyally” serving him and appear to agree with most of his agenda. For example, Meyers touched on a reported conversation between Trump’s former top economic adviser, Gary Cohn, and White House Chief of Staff John Kelly that was reported in Woodward’s book. The discussion reportedly happened after the protests in Charlottesville, Virginia, when Cohn was considering resigning because of comments Trump made about the white nationalist march, The Times reported. Trump ultimately got Cohn to stay on his staff, but Kelly reportedly pulled Cohn aside to talk about how he was treated. (Trump has largely disputed the truth of this book.)

“That was the greatest show of self-control I have ever seen,” Kelly said, according to a Times’ article about the Woodward book. “If that was me, I would have taken that resignation letter and shoved it up his a** six different times.”

This sparked Meyer’s “tough talk is worthless” jab, followed up with the joke:

John Kelly’s like a kid who tells his friends he’s going to stand up to the bully who steals his lunch money,. And then, when lunch time comes, tells the bully: Keep shaking. There’s more in my back pocket.

With all this information coming at us anonymously, it can be overwhelming — that's why comedians like Meyers work to explain the facts but bring a few laughs to serious situations like these.