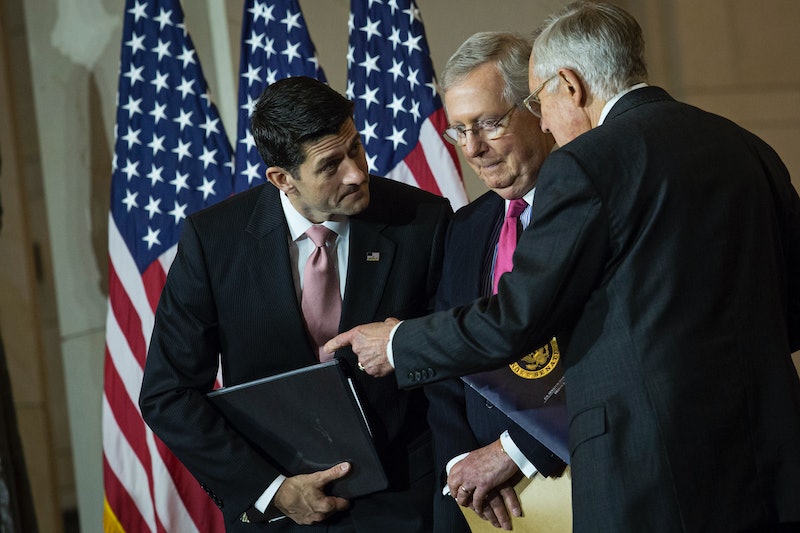 It's been a pretty terrible week for women's reproductive health. Most recently, the House of Representatives voted to pass HR7, which, among other things, makes the Hyde Amendment permanent. The Hyde Amendment makes it illegal for federal funds to be used to pay for abortion — meaning that those on Medicaid, service members, and many other American women must pay out-of-pocket for an abortion. It disproportionately affects poor women, since they are the most likely to be on Medicaid and poor women are also the likeliest to have an unintended pregnancy, according to a report from thr Brookings institute.

So what's changed? The Hyde Amendment was previously a budgetary measure, meaning that it had to be voted on each year in order to remain in effect, but HR7 would make it permanent law.

Even if you're on a private plan, HR7 might take away your abortion coverage. According to Vox, HR7 will eliminate government subsidies for any Affordable Care Act insurance plan that includes abortion, essentially making abortion coverage so expensive for the provider that they may likely drop it entirely.

From my perspective, the strangest thing about the Republican obsession with legislating reproductive rights is that by making abortion more difficult to access, they are actually just making abortion less safe. Their policies won't change the need for abortion. Rather, they will just leave women with highly restricted options when they have unintended pregnancies. If the GOP really cared about decreasing the number of abortions in the United States, they would start by addressing the root causes of unplanned pregnancy. Here are some ways the GOP could clearly do so:

Birth control isn't rocket science, but many American students are only taught about the latter. As a result, myths and misconceptions about contraception abound, and many people who believe they're taking the necessary precautions to avoid unplanned pregnancy aren't. For example, a recent study reported by the National Institute of Health indicated that a "significant proportion" of U.S. couples use condoms incorrectly.

The link between sex education and reducing abortion is clear: unplanned pregnancy happens to those who do not know how to avoid it. However, Republicans often actively work against the promotion of medically accurate sex education in schools.

2. Ensure Access To Contraceptives and Other Family Planning Resources

Of course, just knowing how to use birth control isn't enough. The other half of the safe-sex battle is ensuring that Americans have access to the contraceptives that they need in order to prevent pregnancy. The Affordable Care Act ensured that birth control would be covered by insurance providers. Republicans, however, have already rejected the idea of keeping this provision. By fighting sex education and increasing the cost of birth control, they are actually making it much harder for Americans to avoid unplanned pregnancy.

Republicans who truly want to decrease the number of abortions in this country would certainly look at one of the most tragic causes of abortion: rape. The GOP should be searching for and promoting ways to end rape, including testing the United States' massive backlog of rape kits, promoting conversations about consent with young teens of both sexes, and publicly protesting instances where rapists evaded heavy punishment.

4. Support Parents and the Families They Already Have

Most women who get abortions already have children. American society still makes it very difficult for women with children to succeed in the workplace, particularly if those women are unmarried or low-income. Republicans who were actually eager to reduce abortion would strive to create an America in which mothers are guaranteed the necessary support to raise their children.

Instead, the GOP just voted down a proposed amendment that would have preserved maternity coverage under an Affordable Care Act replacement. Furthermore, as things currently stand, American mothers are not guaranteed paid maternity leave, and many do not get help with the soaring cost of childcare. Donald Trump has actually paid lip service to these issues, but his policies are terrible.

5. Address The Root Causes of Poverty

Poor women are likelier to have an abortion than middle-class or wealthy ones because, according to many experts, they have less access to family planning resources (like contraception and education) and because they may feel they lack the economic stability to raise a child. Republican lawmakers have paid lip service to ending poverty, but their preferred policies — deregulation and tax cuts for the wealthy — don't address many major issues that perpetuate poverty, like low minimum wage. Poor women, specifically, also make less money than their male counterparts; yet Republicans opposed the Equal Pay Act.

According to the Guttmacher Institute, the rate of abortion for black women is five times higher than for white women; for Hispanic women, it's twice as high. The Institute explains that the intersection of race and poverty can prove dangerous for women's health:

These higher unintended pregnancy rates reflect the particular difficulties that many women in minority communities face in accessing high-quality contraceptive services and in using their chosen method of birth control consistently and effectively over long periods of time. Moreover, these realities must be seen in a larger context in which significant racial and ethnic disparities persist for a wide range of health outcomes, from diabetes to heart disease to breast and cervical cancer to sexually transmitted infections (STI), including HIV.

Republicans who want to decrease abortion should fight to give children born into low-income communities an equal chance. Education is a major way to help achieve this, yet the current nominee for Secretary of Education is Betsy DeVos, who previously oversaw what the New York Times called "the biggest school reform disaster in history."

There's one thing Republicans can do that would decrease unplanned pregnancies, help prevent people from falling into poverty, and help support women of all races and ethnicities: keep the Affordable Care Act. Medical bills are the single biggest cause of bankruptcy in the United States. Repealing Affordable Care Act, as Republicans have promised to do, will put millions at risk of falling into poverty over medical bills and make contraceptive access more difficult. It will make OB/GYN appointments a luxury for millions of women, and it will likely result in more unplanned pregnancies.

However, too many GOP lawmakers have made it quite clear that they do not consider the root causes of abortion. In one particularly telling moment, an anti-choice Ohio politician admitted he had "never thought about" why a woman would choose to have an abortion.

So, there you have it. If you want to call your representatives and suggest that they focus on the above strategies instead of blanket funding bans that will hurt women, here's how you can protest HR7.