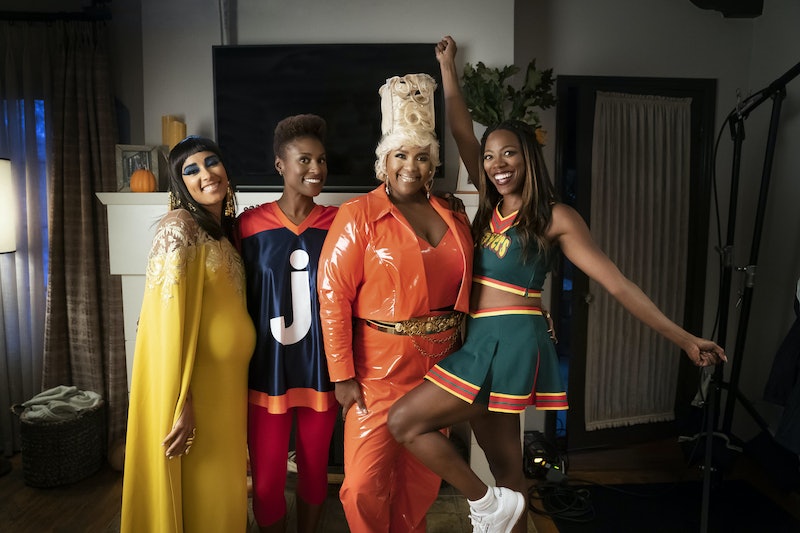 It’s only been a few days since the Insecure season finale aired, and fans everywhere are still trying to process that jaw-dropping plot twist. If the thought of waiting at least another year for your next dose of Issa, Lawrence, and Molly is lowkey depressing, now is the perfect time to do a deep dive into the show’s stellar fashion, care of costume designer Shiona Turini.

First and foremost, Turini used her role at Insecure to support not only established Black designers, but emerging artists who don't always garner mainstream support. Some designers she featured this season include Thebe Magugu, Fe Noel, and Telfar Clemons, who created Issa's ubiquitous handbag. These brands were chosen carefully to reflect each character's singular sense of style. "Black people are not a monolith so there will be brands that are right for Issa that I would never put on Molly, and vice versa," Turini tells Bustle. "An example of this is in their handbag choices. While Issa’s go-to is a Telfar shopping bag or an Unoeth tote for work, Molly gravitates to Off-White, Balenciaga, and Dior."

While many companies are just now embracing Black-owned brands due to "social unrest and industry failings," it's something Turini has been committed to since the beginning of her career. “I really believe it’s a part of my duty to use this platform to highlight and uplift up-and-coming designers, especially Black designers," she says, adding that she sources “designers by way of editorial and PR connections, and looks for new and innovative labels on the market, including on Instagram."

During her decades-long career in the fashion editorial world, Turini has regularly incorporated Black-owned brands into her work and her personal street style looks. In 2014, she attended a runway show at New York Fashion Week wearing a Pyer Moss "They Have Names" T-shirt, bearing the names of Black people killed by police (pictured above) — and the images went viral. In 2019, she served as costume designer on the movie Queen & Slim alongside director Melina Metsoukas, dressing Queen (Jodie Turner-Smith) in a pair of Brother Vellies boots that instantly became a best-seller.

She cites Black costume designers and stylists that came before her as a source of inspiration for her career and her ongoing commitment to advancing her community. "June Ambrose's work, from Belly to Missy Elliot's The Rain (Supa Dupa Fly) video, is probably the most inspiring to me," Turini reveals. "My desire to work in the fashion industry sprung from her portfolio. Ruth E. Carter as well. She designed the costumes for a formative film for me and so many others, School Daze. This season on Insecure, I dived into the anatomy of some of the costumes while recreating Issa's Jiggaboo Halloween costume."

Alongside that epic Halloween look, Issa's vintage T-shirt collection is "one of the most visual ways she communicates with viewers," says Turini. Her graphic tee moments, which include a Waiting To Exhale and an Angela Davis shirt, are often sourced from BLK MKT Vintage, a cultural shop specializing in placing Black history at the forefront of its products. “Not only is it vital to me to buy from and support a network of Black designers and small businesses, it’s also equally important to our characters. They’re mindful shoppers, who live presumably in our world. They are knowledgeable about the importance of supporting small and Black-owned businesses.”

That air of relatability is a core part of why audiences are drawn to Insecure’s characters, flaws and all. “The show reflects how young, Black people occupy space in the world — shopping and visual expression included.”

In order for the costumes to truly resonate with viewers, Turini undergoes an extensive research process when planning the looks for each episode. Every decision is made with great care, paying particular attention to the overall theme of the season. "The season's 'Lowkey Striving' theme is reflected very prominently in the script and also in the costumes," Turini explains. "The main characters are focused on their next moves personally and professionally, so it was important to demonstrate this in their sartorial choices."

In Season 4, Issa breaks new ground professionally as a successful event planner, while Molly finds herself in a committed relationship for the first time. Turini made sure those changes in their personal and professional lives were reflected in their wardrobe. "Issa, for example, purchases — and returns — clothing that is more tailored and refined, more reflective of her professional ambitions. She's settling, comfortably, into her new self," explains Turini. "We see Molly finally in a relationship, which calls for quite a few date-night moments. At the same time, she's developing in a demanding professional arena and wants to stand out. That comes across through well-cut tailoring and dresses in bold colors."

Indeed, the color palette was poignant this season, as Turini employed that medium to speak toward "Molly and Issa’s dynamic," for example. "Whenever Issa was in something warm like her rust jumpsuit, Molly would be in cooler tones such as the teal Max Mara set," says Turini. "Molly was being so icy to her alleged friend, and I wanted to show that sartorially. In the last scene of the season you see that they are finally starting to get in sync again — and I coordinated their costumes intentionally to support this."

Below, get a behind-the-scenes look at Turini's costume designing process for Insecure.

And keep scrolling for some of Turini's favorite looks from Insecure Season 4.

“For her more elevated moments, the Lisa Folawiyo jacket she dons when bumping into Lawrence and Condola is *chef’s kiss*. The jacket represents a more refined take on some of her past costumes — it’s a nod to who she is now and her aspirational self.

That jacket stood out to me because I didn’t want Issa to bump into her ex-boyfriend looking a mess. I wanted Issa to look put together and feel powerful in what could have been an emotionally vulnerable situation.”

“Condola is new this season, so in order to differentiate her look, we stuck to a black, white, and neutral palette. She wears a gorgeous silk polka dot skirt set by Orseund Iris that is resoundingly her character in episode 1. It is obvious why Issa feels a little intimidated, beyond the fact that she enters as a love interest for Lawrence.”

“Molly has a line-up of great date night looks this season that are sexy and sophisticated. The Sally Lapointe snakeskin dress she wears in episode 1 is a sustaining favorite; with a mini hemline, long sleeve, and high neck, it’s ultra-feminine with edge. She wears a Cushnie mauve suit that radiates on screen — the brand is perfect for her with well-placed cut-outs and sensual shapes.

Not to be forgotten, the deconstructed blazer by Monse, which she wears to Thanksgiving dinner, is really a personality piece for Molly: professional and sexy.”

“Speaking of sexy, episode 7 has a lot of heavyweight costume moments for her. Viewers get a panoramic view of her style — from the office to the beach.

Within the episode, we did a lot of color-complementary couple moments for Molly and Andrew. My all-time favorite is the backless knit Cult Gaia dress, which we dyed and customized for her.”

“My favorite looks for my favorite character are when we got to see her reach into the elevated realm. Her silk blue Henning suit at the block party is top tier for me.”

“It was really fun to recreate that iconic orange patent suit and the accessories from B.A.P.S. [for Kelli's Halloween costume]. It was a great way to pay respect to iconic Black film.”

“The blue pleated Pyer Moss dress Tiffany wears to the block party mixer is my favorite for her. The silhouette is jovial and flirty, which is in line with her character, and it means even more to support and have the support of a brand that aims to uplift the culture.”

“She also wears a Fe Noel pink printed dress in her office that looks great on her skin tone.”

“The red cut-out suit jacket by Thebe Magugu she wears out with Lawrence — now that was a moment. I knew Issa would have the top on for almost the entire episode, so it was imperative we highlight and feature a Black designer.

I wanted it to show a little skin (let Lawrence know what he’s been missing), but nothing that felt like she was trying too hard. Not only that, red looks stunning on Issa’s skin. I couldn’t take my eyes off her on screen!”

More like this
Genius T.J.Maxx Shopping Hacks For Sales On (Almost) Everything
By Kelsey Stiegman
10 Corsets That *Actually* Work For Big Boobs
By Bella Gerard
Androgynous Formal Wear That Will Make You Feel *So* Fancy
By Megan Lasher
Dr. Martens’ New Collab Reimagines A DM Classic
By Frances Stewart
Get Even More From Bustle — Sign Up For The Newsletter