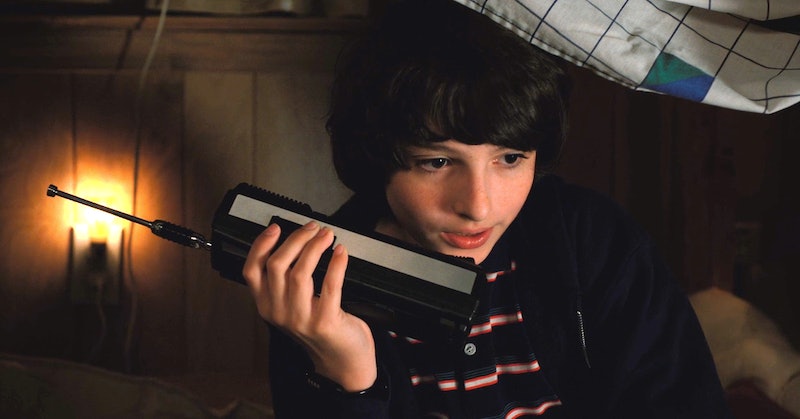 Spoilers ahead for all of Stranger Things 2. Romance abounds in Stranger Things 2, and the series gave hope to or fulfilled many ships. Hopper and Joyce shared a meaningful hug. Lucas got his first kiss. Jonathan and Nancy went all the way. But the coupling that made fans' hearts sing the most was Mike and Eleven's. If you're an adult, wanting two kids to get together might feel a little creepy. But shipping Eleven and Mike on Stranger Things isn't weird. In fact, based on the events of Season 2, it's totally what the series wants you to be doing.

While Stranger Things already established that these two were more than just friends in Season 1 — Mike even planted a kiss on Eleven — they're older now, and their feelings have progressed appropriately. As they reminded viewers, they were separated for 353 days (3+5+3=11), so by the time they reunite at the end of Episode 8, emotions are running high. Though Eleven's return in "The Mind Flayer" is already epic — she just saved the gang from demodogs — the real heart of the scene is when Mike and Eleven see one another. When Mike steps forward, hardly able to believe that Eleven is finally standing in front of him after a year, his look morphs from astonishment to relief to happiness once he realizes she's real. Meanwhile, Eleven's fierce face practically melts as she looks at Mike looking at her. No one else in the room exists for these two in this moment.

The scene is charged with mutual affection (didn't Steve say you can feel the electricity of love?) and that's a testament to the talent of the young actors behind the characters. Without saying a word, Finn Wolfhard and Millie Bobby Brown convey every single emotion Mike and Eleven are feeling in a heartachingly palpable way, proving that despite all of the freaky, more action-based cliffhangers in Season 2, the best end-of-episode scene belonged to the budding love story of two young teenagers.

Much like Stranger Things itself, which is adored for deftly balancing its sci-fi elements with heartwarmingly grounded ones like Mike and Eleven's reunion, Mike and Eleven's relationship also embraces this defining feature of the series. From the moment he met her, Mike accepted Eleven in all of her paranormal glory. Even though she didn't have a typical childhood, Mike always provided her with a safe space to be herself, and that's one of the reasons she loves him. As for Mike, he is clearly enamored by Eleven and her powers, but his unwavering devotion to her throughout Season 2 proves that it's not just her special abilities that make her special to him. All of this, in turn, led to an exceptionally emotional reunion.

The Mileven ship also really resonates with people because of how pure it is. Sure, Eleven showed a nasty side when she was jealous of Max, but otherwise, their relationship is relatively untainted... even with all of the evil they have seen in the world. So if you've been feeling creepy rooting for these two, you can take comfort in knowing that this emotion actually comes from a very innocent place — and that there are plenty of other Mileven shippers right there with you.

It's clear from the Season 2 finale, which ends with Eleven and Mike dancing at the Snow Ball together, that the series very much wants you shipping these characters. In fact, they are the tween equivalent of endgame. Sure, it took a full season — Mike asked Eleven to go to the dance with him at the end of Season 1 — but Stranger Things came through and finally gave Mileven fans exactly what they wanted. The level of love — especially for a pair so young — was almost too much for the internet to handle.

But if you're still feeling a bit strange about rooting for such a young couple, remind yourself that the show's creators, the Duffer Brothers, were right there with you in wanting Mileven to happen. Let's just say it was no coincidence that the very first topic covered by the Beyond Stranger Things aftershow was the Snow Ball and Mike and Eleven's kiss. On the aftershow, the creators indicated that they always knew Stranger Things 2 would end at the middle school dance with an emotional moment between these two characters; director Shawn Levy also joked that they should change the episode title to "The Kiss," indirectly acknowledging how much they knew fans would love this moment.

And it's not just fans. Brown and Wolfhard revealed that all of the Snow Ball extras applauded on set after their characters kissed, much to their embarrassment.

But if you still feel kind of uneasy about your obsession with this young couple, think back to your middle school dances or your first crush and try to remember how just how enamored you were. It may be easy for adults to forget just how intense emotions are in adolescence, but the truth is that Eleven and Mike's feelings for each other are totally natural — even if many of the things they have experienced in their young lives are not.