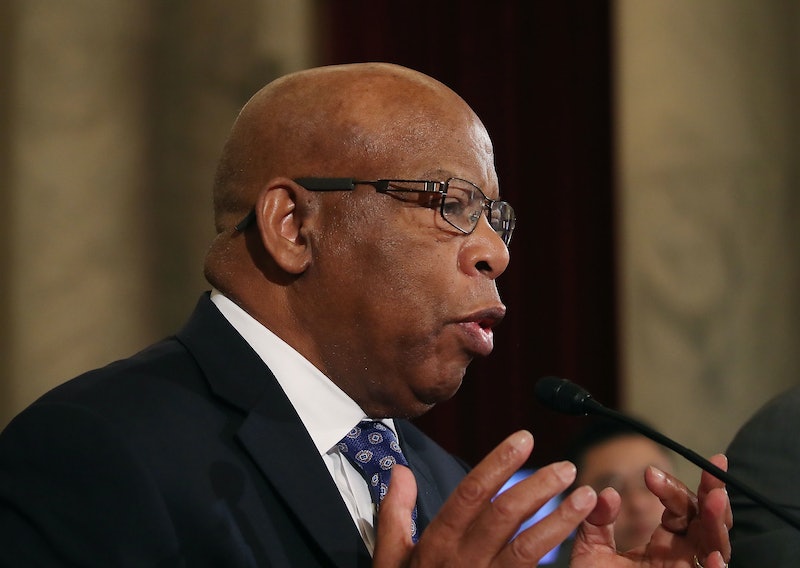 Odds are that if you're planning to be in Washington, D.C., to attend — or protest — Donald Trump's inauguration on Friday, you've already made your plans. But assuming you've decided you won't go in person, or you won't be in D.C. until the Women's March on Saturday, your Friday plans might be up in the air. There will be one big event on the television. I bet you can guess what it is.

So, should you watch Trump's inauguration? If you decide not to view the ceremony, you'll be in good company. A growing number of representatives have decided to boycott the event.

As reported by The Washington Post, more than 40 (as of writing) have decided to boycott the swearing-in and all following celebrations in the nation's capital. Some are doing so because of the revelations that Russia's hacking influenced the election; for others it was Trump's attack of the civil rights icon, Rep. John Lewis, over the weekend on Twitter that convinced them not to attend. "Congressman John Lewis should finally focus on the burning and crime infested inner-cities of the U.S. I can use all the help I can get!" Trump wrote after saying that Lewis is "all talk."

Before that, the opposition was more limited. On Saturday, Lewis told NBC News that he thought the Russians had damaged Hillary Clinton's candidacy, and as such, he did not think that Trump was the real deal. "I don't see this president-elect as a legitimate president," Lewis said when asked if he would try to establish a relationship with the new leader.

If you don't attend, you might want to follow the lead of those many House members and post your reasoning online. The various representatives have taken to Twitter with posts, videos, and polls to explain why they will spend Friday protesting the inauguration as opposed to attending. Some will do so from D.C. and others in their home districts.

Rep. Karen Bass of Los Angeles, put it up to her constituents with a Twitter poll. With two days left in the poll and more than 12,000 votes cast, about 84 percent have urged her to stay home. Others more directly rejected celebrating Trump. Fellow Californian Rep. Maxine Waters posted that she hadn't "ever contemplated" going, while Rep. Mark Pocan of Wisconsin posted an explanation that specifically pointed to Trump's online treatment of Lewis.

In the end, whatever you decide to do is a personal decision. And watching from home is not the same as going, especially as an individual citizen as opposed to an elected official. But if you do decide to sit this one out and refrain from even watching on TV or a web stream, know that you won't be alone in doing so.