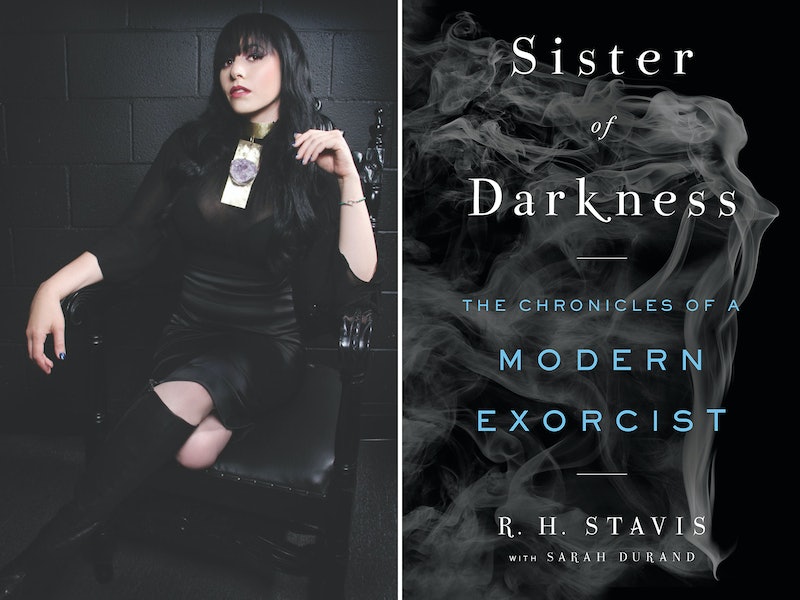 “What I love when people come and they have this process done, is how they feel after,” writer R.H. Stavis tells me over the phone.

“The process” she’s referring to is an exorcism. Stavis is a self-proclaimed secular exorcist and author of the book Sister of Darkness: The Chronicles of a Modern Exorcist, out Feb. 6, which details her journey down this unusual career path. And if you think you’ve never been possessed before, well, she just might change your mind.

According to Stavis’ ontology, demonic possession is extremely common — in the book she claims, “99 percent of people" are possessed at any given time — caused by beings she calls “entities." These entities latch onto humans and cause all sorts of problems in their lives, from depression and anxiety to addiction. She views it as something of a personal calling to rid humans (and the occasional building) of the entities that plague them.

The book is part memoir, part diagnostic tool, and part self-help book. Stavis weaves a compelling narrative that follows her from childhood, when she first claims she began to see these creatures, through her realization that she could help people by removing entities from their bodies.

Sister of Darkness: The Chronicles of a Modern Exorcist by R.H. Stavis and Sarah Surand, $16, Amazon

Initially, Stavis conducted her work in private and didn’t advertise her services. Then, one day, she met a journalist at a party. “I was answering questions with the one person all night and it turns out he worked for NPR. [H]e was like ‘I'd love to do a story.’ So, being someone who works in energy and spirit, of course, I just thought well that must be divine timing, it must be time,” Stavis says.

As far as the actual exorcisms go, Stavis conducts them out of her Los Angeles home, in a separate structure she calls her "Spirit House," which is specifically designed to aid the process. Partly for this reason, she only performs remote exorcism under extreme circumstances, when "there's a reason why [the person] can't be physically in the space," she says. "When I do a remote exorcism I don't use technology at all. I use items from the person." When attempting to remove an entity from a person, she calls upon various Spirit Guides for assistance and utilizes herbs, crystals, and other New Age staples to help her. "[You] just can't be scared while you're doing it," she says.

I just thought well that must be divine timing, it must be time,” Stavis says.

Many will likely read Sister of Darkness with a heavy dose of skepticism, but Stavis thinks that even non-believers can find something of value in her story. "What I want people to take away from it is the one thing they can believe in, which is to start believing in yourself. Start believing in what you put out there. Start believing in the power and everything that you are capable of. Because that's something that we don't remember anymore," she says. "Some people say, 'seeing is believing.' But there are a lot of things we don't see [...] We don't see gravity, for example. What we see are the effects of gravity. So I tell skeptics look, you may not see entity. But I guarantee you in the world you're seeing the effects of entity. Every day. Every day."

And if spiritual possession is even half as serious as Stavis claims, we truly do have something to worry about. The most common entity Stavis describes is called a "Clives," named for its resemblance to a Clive Barker illustration. They tend to amplify "preexisting negative emotions," Stavis writes, resulting in violence, alcoholism, and depression. She alleges that just about everyone will be inhabited by a Clive eventually. "Sandmen" are entities that target multiple individuals in close proximity at one time, giving them vivid and highly intense nightmares. And then there are are Realm Walkers, which Stavis describes as "the most toxic and malevolent entity in the world," capable of causing mass destruction.

"So I tell skeptics look, you may not see entity. But I guarantee you in the world you're seeing the effects of entity. Every day. Every day."

Informing readers of the ubiquity and seriousness of possession and our own ability to raise our individual energetic frequency is the driving force behind the book. “I’m really glad that it's out,” Stavis says with conviction. “It’s definitely something different for people, and not for everybody […] but I'm glad that it's out enough to bring all of this awareness to people who just didn't have it. [T]he book isn't quite out yet but I'm even getting emails and messages now from the few people who've been able to read it saying how helpful it's been for them. So, I think that's a real gift.”

Though her job may have seem exciting or bizarre, depending on who you ask, Stavis maintains that, at its core, its really all about helping people. “You know […] once people come to have an exorcism, before we start the process, I always say to them, ‘I want you to feel where you are right now [….] This is the last time in your life you will ever feel like this,’” she says, “and when they're done, they leave like clean slates.” From there, Stavis maintains that its up to the people she sees to decide where they go next — “Do you go back to that negativity or do you rise?”

More like this
The 20 Best Audiobooks To Fall Asleep To
By Aoife Hanna and K.W. Colyard
Watch The Emotional Trailer For Dolly Alderton’s 'Everything I Know About Love'
By Bustle UK
10 Must-Read New Books Out This Week
By K.W. Colyard
Thank U, Ex
By Rosemary Donahue
Get Even More From Bustle — Sign Up For The Newsletter