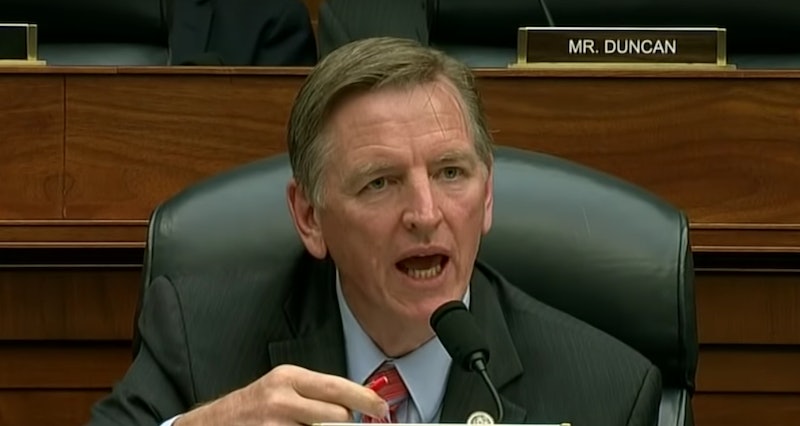 Republican Rep. Paul Gosar is running for reelection in Arizona this year, but six of Gosar's siblings have endorsed his Democratic rival for Congress. In a series of new campaign ads released by Democrat David Brill, who is running against Gosar in Arizona's fourth Congressional District, six of Gosar's nine siblings condemn their brother as a "racist" who is "absolutely not working for his district." Bustle has reached out to Gosar's office for comment.

The ads feature siblings Tim, Jennifer, Gaston, Joan, Grace, and David talking about how their brother's views on climate change, immigration, and health care are not representative of their family, as the Phoenix New Times reported. Several of the siblings acknowledge in the ads that it is unpleasant to speak out against their brother, but they feel obligated to do so.

"We've got to stand up for our good name," David says in one of the ads. "This is not who we are."

Gosar has represented Arizona's fourth district — which according to USA Today is one of the most Republican-leaning districts in the state — since 2011. Earlier this year, Gosar generated national controversy after demanding the arrests and deportations of "any illegal aliens in attendance" at Donald Trump's State of the Union address, according to the Washington Post.

Brill's ads are not the first time Gosar's siblings have spoken out against him. Last year, in an interview with VICE News, Gosar suggested that the white nationalist rally in Charlottesville, Virginia, was funded by George Soros, whom he then accused of being a Nazi collaborator. In response, seven of Gosar's siblings wrote a letter to the Kingman Daily Miner to argue that Gosar "owes George Soros a personal apology."

"Those aren’t our family values or the values of the small Wyoming town we grew up in," Gosar's siblings wrote at the time. "Character assassination wasn’t revered. Lies and distortions do reveal much about the character of the congressman of Arizona’s 4th congressional district, however."

"They're really upstanding, wonderful people," Brill told the Phoenix New Times. "But I didn't want to be involved in the process, so they could be themselves."

In response to his siblings' appearances in Brill's ads, Gosar tweeted on Saturday that "you can't pick your family."

"We all have crazy aunts and relatives etc and my family is no different," Gosar tweeted. "I hope they find peace in their hearts and let go all the hate. To the six angry Democrat Gosars — see you at Mom and Dad's house!"

Many of Gosar's siblings have made it clear that they are no longer close to their brother due to their intense political differences and public disagreements, according to USA Today. They did acknowledge, however, that Gosar's political views were fairly in line with those of their parents.