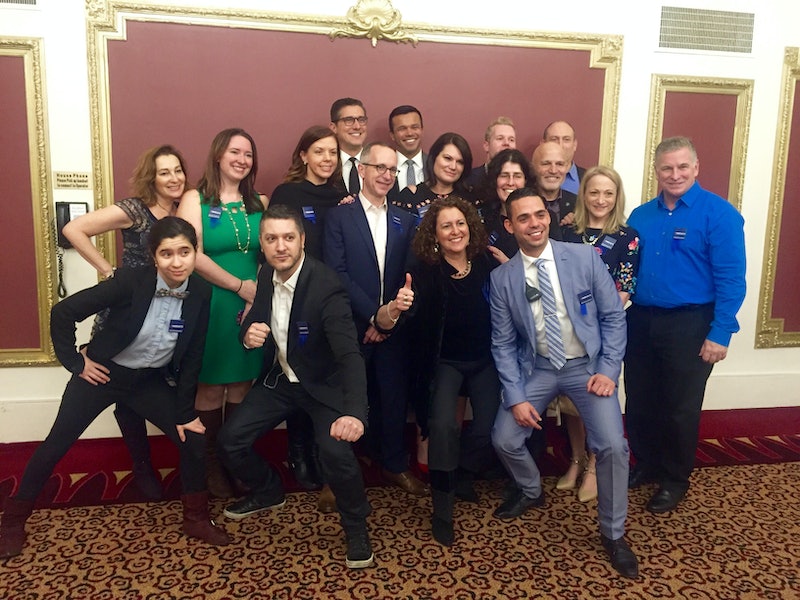 On Jan. 19, the day before President Donald Trump was sworn into office at the U.S. Capitol, there was different kind of inaugural ball. More than 1,000 people attended the Anti-Inaugural Ball in New York City, according to Kevin Jennings, co-chair of the event and former assistant secretary of education between 2009 and 2011 during President Barack Obama's first term. The ball was open to anyone, but it was meant to be a space for those who are looking to prepare for a Trump presidency. After all, considering that Trump insulted immigrants, women, and a host of other people during his campaign, there are many Americans who were less than joyous about his swearing-in — and the Anti-Inaugural Ball was a place for them.

The event took place in a real ballroom at the Wyndham New Yorker Hotel, with an open bar and tables of hors d'oeuvres sprinkled across the room. Attendees got to enjoy standup comedy by actress Judy Gold, television producer Dominick Pupa, and actress Caroline Rhea, perhaps best known for her role in Sabrina, The Teenage Witch. Although the name of the Anti-Inaugural Ball suggests an elegant dress code, the unofficial dress code was essentially wear what you can afford and what you want. There were men and women in dapper suits, glittery ballgowns, and pro-feminism attire. People wore hats, and heels, braids and bow-ties.

Beyond the dancing and mingling, however, was an atmosphere of restlessness from people who are passionate about supporting inclusion and equality for all, and who are looking for ways to fight for the rights of all Americans.

At the Anti-Inaugural Ball on Jan. 19, I asked six people how they picked their outfits for the night and what their attire says about the causes that matter the most to them: