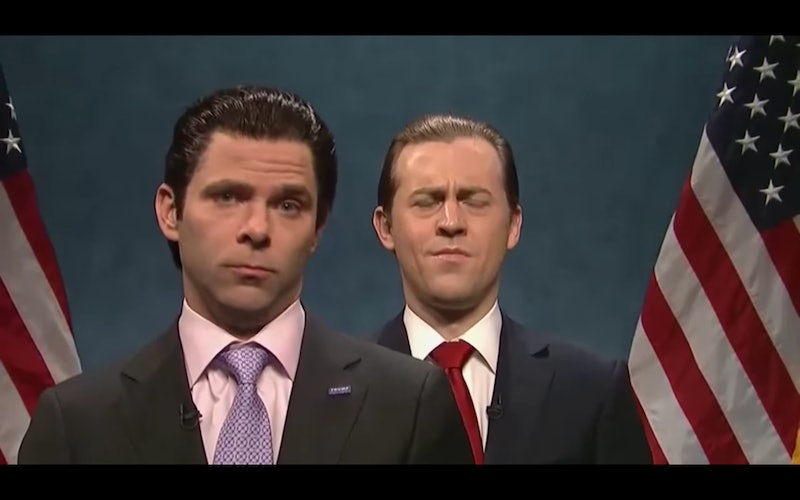 Saturday Night Live's first show of the new year got 2017 off to a solid start with a recap of Donald Trump's press conference, but one moment in the cold open actually provided an opportunity to reflect on an less frequently considered ethical question about the Trump family. SNL bashed Trump's sons Eric and Donald Jr., and they're a more complicated subject than they may seem at first. Their role is so unique that the guidelines for satirizing them are completely undefined, but it's their own actions going forward that will define what's acceptable when it comes to the Trump children.

Trump's sons were present for the real event and the parody, portrayed in the later by Mikey Day as D.J. and Alex Moffat as Eric. Their big joke in the cold open focused in on their appearance, when their father (infamously played by Alec Baldwin) called them "little American Psychos." "You can tell what good businessmen they are because of how slicked back their hair is," Baldwin as Trump, continued.

While the jokes were undeniably funny, they also prompted the surprisingly difficult question of whether or not it's really ok to make fun of Trump's eldest sons. Like most things with Trump, how to talk and think about his kids is unprecedented territory. His older children have been deeply involved with the campaign and the transition, so theoretically, they're open targets to the same scrutiny and ribbing as their father. Even still, there's a natural reticence to steer clear of mocking them — there aren't many rules in politics, but one of the most steadfast is that children aren't a topic of discussion.

There's also the fact that the world doesn't know too much about Eric and Donald Jr. individually, since they don't have the same public profile as their sister Ivanka. Harshing on them too much can seem like unfair projecting from their father, which they don't deserve no matter how bad of a person he is. Even if Eric and DJ do generally seem smarmy, it's still tough to argue that anyone has observed enough of their behavior to really have a representative picture of who they are.

The Trump heirs didn't get to choose who their father is or how he made their family business, to which they are an integral part since the whole empire is based on their shared last name. Plus, I personally get the feeling that their dad would not be agreeable to any of them trying to break ranks even a little bit these days. They may very well be in the spotlight without really wanting to be, in which case, they deserve some mercy. The reality is that judging DJ and Eric's characters based on the small snippets of information that are available isn't fair, and they don't deserve undue defamation no matter who their dad is. Therefore, it's crucial to examine whether any criticisms are truly warranted or just easy jokes. This is one of the central challenges of covering Trump in the media, and even thinking about him independently; to maintain objectivity and approach all things Trump-related with clear eyes.

Ultimately, the Trump children get to decide their fate in the media based on their actions. If Donald Jr. and Eric really do run the business separately from their dad's politics and maintain the pretty low profiles they kept before, then they are private citizens just like any other and deserve treatment as such. In that case, there are plenty of more important things to bash Trump himself for without taking cheap shots at his kids. If, however, they remain mired in scandal and conflict intentionally, then by all means, it's Trump season for comedians.