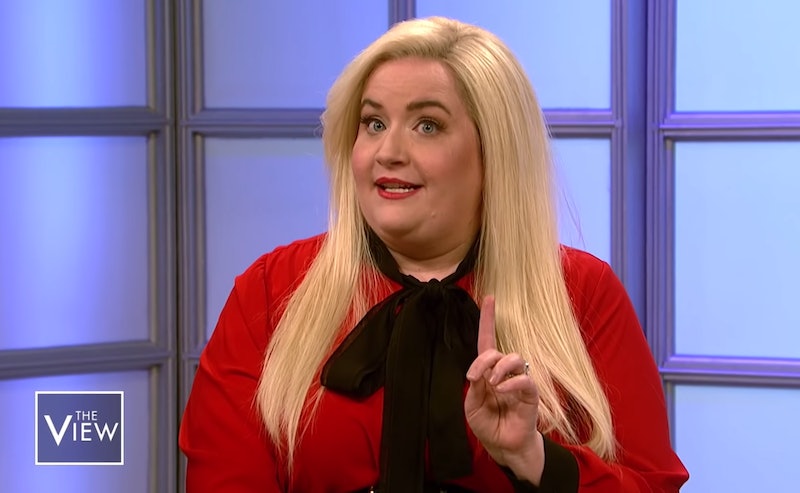 Over the weekend, the cast of Saturday Night Live dragged Meghan McCain's immigration views as part of a sketch satirizing The View, where McCain is a co-host. In the clip, McCain refers to herself as "the princess of Arizona" and demands that she be listened to.

During the sketch, Leslie Jones' Whoopi Goldberg brings up the topic of Kirstjen Nielsen, who just resigned from her post as Secretary of Homeland Security. After a bit of riffing, McCain, played by Aidy Bryant, interjects.

"Can I just say something as the princess of Arizona?” Bryant's McCain asks, according to video clips. “There is a crisis at the border, and the border is right up in my Arizona, which was founded on sunburnt women selling turquoise jewelry, not rando Mexicans. And that’s not racist because my makeup artist is gay."

Co-host Joy Behar, played by Kate McKinnon, attempts to respond to McCain's remarks, but is unsuccessful. Instead, the two women repeatedly talk over and interrupt each other. (Earlier in the week, The Daily Beast reports, the two did actually have a fight on air — and it was also over immigration.)

The back and forth comes to a head when McCain interjected: "Can you let me talk because it’s actually your job to listen to me!”

At that point, Behar froze and, in the sketch, became dramatically backlit as she glared at McCain across the table. The other co-hosts also went silent, eating popcorn and taking video of the spat.

“OK, stop it. We’re not going to do this,” Goldberg then said, taking out a spray bottle. “This is The View. We’re five best friends with nothing in common.”

She proceeded to squirt water at McCain and Behar in an apparent attempt to temper their argument. Goldberg also changed the subject, welcoming former View co-host Jenny McCarthy, who is played by Emma Stone.

But, the conflict didn't end there. Later in the sketch, the feud between McCain and Behar reignites during a discussion about vaccines.

"What the left fails to understand is that vaccinations are a personal liberty issue," McCain told her fellow co-hosts.

Once again, the pair speaks over one another, both asking to have the opportunity to speak. Eventually, Behar starts taking off her earrings and asks, "Can I punch you in the face?"

Goldberg intervenes once more, spray bottle in tow. While once again breaking up the spat, she sprays them both with water. With that, the sketch ends.

McCain responded to the sketch on Sunday. In a tweet, she took the satirization with stride, and described the roasting as an honor.

"I’m not supposed to be on twitter because of hiatus BUT this sketch is hilarious, and being parodied by @SNL is a huge pop cultural honor. - Signed, your old intern and 'the princess of Arizona,'" she wrote.

Behar also responded to the sketch, applauding McKinnon's portrayal of her. "Finally an actual female is playing me," Behar tweeted Sunday morning. "Thank you Kate."

Although some people do not take well to being satirized on the program, both Behar and McCain appeared to be in good spirits the next day.