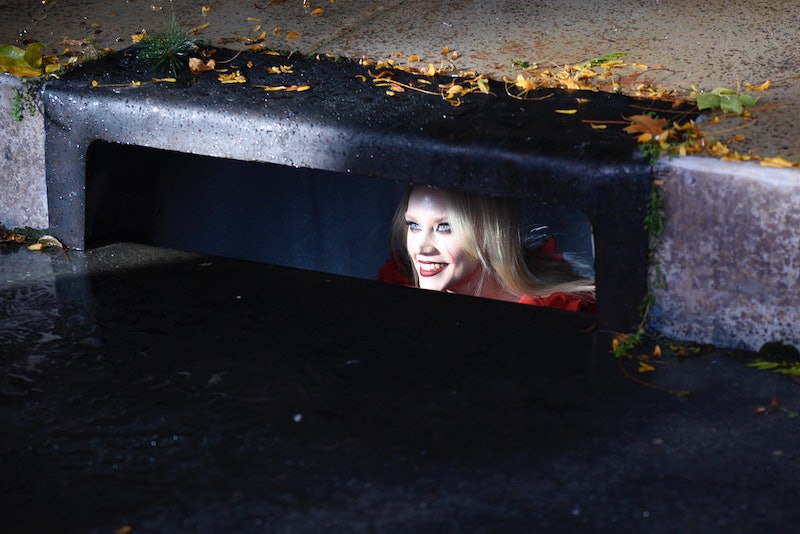 Audiences are already terrified of Pennywise, the evil dancing clown lurking in storm drains as seen in the new movie based on Stephen King's It. But on Oct. 14, Saturday Night Live decided to put a political spin on it. SNL's It parody put Kellyanne Conway, counselor to President Donald Trump, in the role of Pennywise. Emmy-winning SNL cast member Kate McKinnon is always a delight as Conway, but this time, the filmed parody took her impression of the pollster to a whole new hilarious level. Her stellar take on Hillary Rodham Clinton also makes a brief cameo in the sketch.

It all begins with cast member Alex Moffat stepping into the shoes of CNN host Anderson Cooper. His Cooper wraps up filming at CNN in New York City and he turns down an appearance for McKinnon's Conway to be on his show. Moffat's Cooper walks out onto the rainy streets of Manhattan, loses one of his papers, and follows it to a storm drain — which is where Conway seems to lurking. She calls herself "Kellywise, the dancing clown" and begs Cooper to let her be on his show. "What did you do to your make-up?" Moffat's Cooper asks her in the sketch, referring to her Pennywise-inspired new look. "I toned it down," she replies, before demanding, "Put me on TV."

She then rehearses lines about Puerto Rico and Secretary of State Rex Tillerson's allegedly calling Trump a "moron." "They were sharing a sundae and the president asked if he wanted more sprinkes," McKinnon's Conway explains in her regular Kellyanne voice. "And the secretary said, 'More on.'" Kenan Thompson plays a friendly police officer who notes to Cooper, "Every day she drags someone into that sewer. Don't believe me? Yesterday, she got Rachel Maddow." SNL cast member Cecily Strong then emerges in the drain as Maddow. "You'll float too, Anderson," Strong's Maddow tells him from inside.

Kellywise continues to demand a spot on Cooper's show and he declines. "Put me on your show, or I'll have to show you your greatest fear," she tells him. Cooper claims to not be scared of anything, until Conway holds up two newspapers, with headlines that read: "Trump Re-elected To Second Term" and "Anderson Cooper Fat Now." Then, a red balloon appears and Kellywise morphs into McKinnon's other amazing impression: Clinton. "It's me, I'm down in the sewer," McKinnon's Clinton says, not very naturally and indicating this is a Kellywise trick. She holds up her hand and asks Cooper to help her out of the drain and it's clearly a trap. But she doesn't give up and offers him a copy of her new book, What Happened? (which is an real book Clinton wrote recently).

It's an offer Moffat's Cooper simply can't refuse. He reaches for a copy of the book and once he gets close, Clinton turns back into Kellywise, her teeth become scary and sharp, and she bites off Cooper's arm. Cooper tries to crawl away without his other arm. Thompson's cop runs away from the scene as Conway pulls the rest of Cooper's body into the storm drain.

Of course, a sketch like this has a twist ending that may terrify you — or just make you laugh very hard. Watch the full parody in the video below to see Kellywise in action.

I don't want to give anything away, but let's just say that Kellywise Conway somehow gets what she truly wants in the end, even to the surprise of Cooper. The parody was a super funny way to combine two of McKinnon's spot-on SNL impressions with a true Stephen King classic.