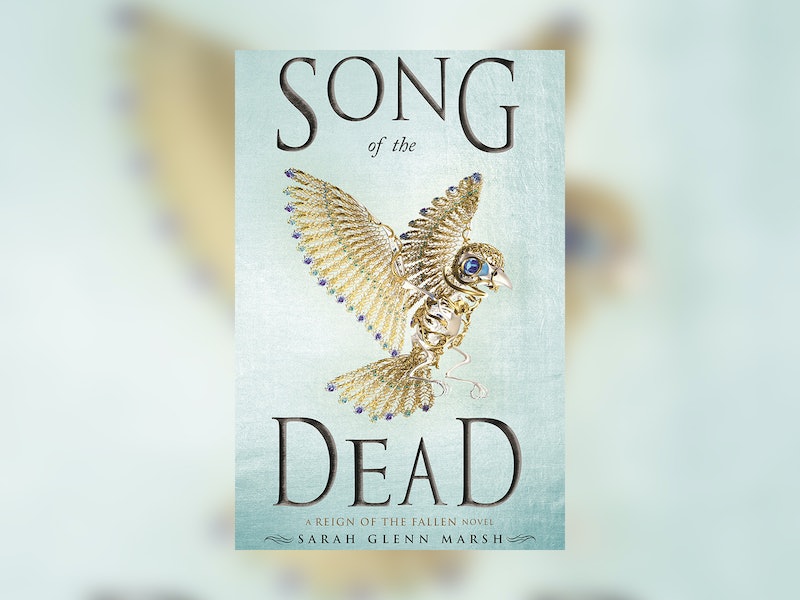 In Reign of the Fallen, author Sarah Glenn Marsh created a mesmerizing fantasy world that blurred the line between life and death. Now, she's back with more dark magic, thrilling adventure, and breathtaking romance in Song of the Dead, and Bustle readers can see the exciting sequel's gorgeous cover and start reading and exclusive excerpt from it below!

Song of the Dead picks up where Reign of the Fallen left off, with Odessa aboard a ship she hopes will take her away from Karthia, away from her past, and away from her broken heart. But finding a new beginning isn't easy with Meredy aboard to remind Odessa of their history, and despite the magic they discover on their journey — a land where the Dead rule and dragons roam free — and the possibility of a second chance at love, they are sucked back into their old lives with Karthia calls them home. The kingdom is plagued with political unrest and the growing threat of foreign invaders, but Queen Valoria has a secret weapon. Can it save them all or, as Odessa fears, are they hopeless without the dead?

A gripping story brimming with magic, excitement, and heart, Song of the Dead will thrill fans of Reign of the Fallen. Although it doesn't hit shelves until next year, Bustle readers can see the cover and read and exclusive excerpt from spellbinding sequel, below:

Song of the Dead by Sarah Glenn Marsh, $18, Amazon (Pre-order)

Song of the Dead

The Shade darts toward my friends and me on all fours, drooling and snarling as it breathes the human-scented air, a rarity in the Deadlands. Bits of gray, rotten flesh fly off it as it bounds into a field of luminous flowers, gaining ground even as we run our hardest.

Valoria falls first, as the monster’s bony hand wraps around her ankle and tugs. I spin around and draw my sword, but too late. Valoria’s already gone, and the monster has Simeon and Jax in its fists, shaking their limp bodies as their heads loll between their shoulders.

Unhinging its jaw, the Shade grinds it razor-sharp teeth in anticipation. It pops Jax into its mouth, then Simeon, as I hack at it with my sword. The monster doesn’t even seem to notice the cuts I’m making. It just keeps gulping down my friends as I sob and slash at it.

Now it’s got Danial and Kasmira. I thought they’d run ahead to safety when the monster grabbed Valoria.

I shove my sword through its middle, but of course, Shades don’t have hearts. Black blood leaks from the wound I created.

The Shade releases a gleeful howl, sending spikes of cold down my back. Gazing into its sightless face, I realize what’s made it so happy: It’s cradling Meredy’s broken body, about to swallow her up.

With an anguished yell, I pull my sword free, aiming to cut off the creature’s ugly head. But my sword turns to dust in my hands.

There’s nothing I can do.

“Odessa!” someone calls from a distance.

But I don’t look to see who spoke. Instead, I force myself to watch as the monster unhinges its jaw, splashing Meredy’s pale face with drool.

Just as suddenly as it raises her to its mouth, it drops her. It grabs me by the shoulders, locking the black pits of its eyes on mine, and releases an ear-shattering cry.

I blink into the deepest darkness, breathing hard, shrugging off the lingering haze of a dream. It’s Meredy’s warm hands on my shoulders, not the skeletal claws of a Shade. It’s Meredy accidentally sitting on my legs, shaking me awake, her breathing quick with worry.

I blink into the deepest darkness, breathing hard, shrugging off the lingering haze of a dream.

The Paradise gently rocks as it glides over a swell, headed farther away from Lyris toward open seas, assuring me that I’m nowhere near the Deadlands.

“What are you doing?” I mumble, still trying to wake myself further. “I’m all right.”

“I’m sorry,” Meredy whispers, dropping her hands. “You woke me up with your muttering, and it sounded like you were having a nightmare. I wanted to help . . .” She pulls back, hastily retreating from my cot.

“Thank you,” I murmur, grateful for the darkness hiding my embarrassment.

Meredy’s breathing relaxes as she settles on her bed. “Do you want to talk about it? What happened in your dream?”

“No. But—thanks for offering.” Heat rises up my neck at the thought of Meredy hearing what I dreamed, how I couldn’t protect her or anyone else even in a world that exists entirely in my mind. “If I have another nightmare tomorrow, do you think you could—?”

“I’ll wake you,” she promises.

Meredy falls silent after that, so I try to concentrate on the rhythm of the sea and the way the wind calls across it, first howling and then pausing, as though waiting for a response that never comes.

At last, Meredy asks in a small voice, “And if I have a bad dream?”

“Good.” Rising onto her knees, Meredy fumbles with something in the darkness a moment.

Our single lantern, dangling from a beam overhead on a fraying strap, flares to life. By its ruddy light, Meredy searches for something under her bed and reemerges with a heavy book in hand. “The Baroness’s Secret Heartache,” she reads with a slight grin, cracking it open. Even from a distance, its pages smell like old clothes dragged out of a wardrobe after years of disuse. “I, er, borrowed this from Valoria’s private library of stories King Wylding thought he’d burned. It’s childish. The writing’s clumsy at best. But it’s got everything. Seamstresses. Kissing. Nosy relatives. A missing tea set. And of course . . .” She pauses for dramatic effect, and as I wait eagerly for her to go on, her enthusiasm chases away the last unwanted remnants of my dream. “Murder!”

Even from a distance, its pages smell like old clothes dragged out of a wardrobe after years of disuse

“I can’t imagine Valoria will miss it,” I say, grinning for a moment. But thoughts of Valoria quickly become an ache I can’t soothe, and soon I’m frowning again.

“If you’d like, we can take turns reading it out loud. But be warned, I make up different voices for all the characters, and I expect you to do the same.” She smiles softly. “It reminds me of the plays we used to go to as a family in Noble Park—me, Elibeth, Evander, and our parents. Of course, that was a long time ago . . .”

I arch a brow. “Plays? Really? I don’t much care for watching others pretend to live—why waste time doing that when you can go out and experience things for yourself?”

Meredy blinks at me, apparently horrified. “I’ve got to show you what you’re missing!” She seems determined as she turns to the first page and takes a deep breath. It isn’t until the moment of quiet that I realize hearing Evander’s name on her lips didn’t hurt—at least, it didn’t make me miss him any more than I do already. She said his name without hesitation, as if she’s comfortable using it again. Comfortable, and still so strong after everything.

As she starts to read, I say softly, “You’ve never explained how you do it.”

She blinks, lifting up her head. “What? Sneak a book away from Valoria?”

“No.” I run my finger along the worn edge of the cot’s frame. “Stop missing Evander long enough to go on living.”

Meredy’s gaze grows distant, though she’s still looking right at me. At last, she says, “I’ll let you know when I figure it out. I’m still trying. Believe me, I’m trying.”

She starts to read again, and this time I don’t interrupt. Her voice washes over me, taking me back to the book’s long-ago version of Karthia, to a time before King Wylding’s rule when merchants from distant lands like Osmana and Yekar came and went freely from our kingdom, offering seeds that would one day grow into Karthian delicacies. Loving and leaving offspring who became part of the vast and varied pool of Karthian bloodlines.

She starts to read again, and this time I don’t interrupt. Her voice washes over me, taking me back to the book’s long-ago version of Karthia, to a time before King Wylding’s rule...

It makes me wonder about the Karthia we’ve left behind. I doubt things could go wrong with Valoria on the throne, but then, I would have doubted that any Karthians could blindly trust Hadrien, and some did—Meredy and Evander’s own mother among them.

Just imagining the challenges Valoria could be facing right now makes my breath catch in my throat. I shake my head, refocusing on Meredy’s voice. Right now, the only world that exists is the one inside this cabin.

Darkness crouches all around us, but in here there’s warmth and light, and Meredy’s eyes meeting mine each time she pauses to turn another page, and—a small but steady spark.

Song of the Dead by Sarah Glenn Marsh, $18, Amazon (Pre-order)

More like this
These 25 International Horror Movies On Netflix Prove Fear Is A Universal Language
By Bustle Editors
Read The First Pages Of Emma Rosenblum’s Highly Anticipated Debut, 'Bad Summer People'
By Samantha Leach
What Joyce Carol Oates Knows About Fame
By Erin Somers
10 Must-Read New Books Out This Week
By K.W. Colyard
Get Even More From Bustle — Sign Up For The Newsletter